Protect the "Murder House" at all costs

The Langdon Family are the main antagonists of American Horror Story: Murder House. They are an extremely dysfunctional family led (after a fashion) by Constance Langdon, and the next-door neighbors of the Harmons. They are also former residents of the titular Murder House, and like many such inhabitants, their time on the property resulted in numerous deaths. With the exception of Adelaide and Beau, much of the family is villainous in some form or another; fortunately, the dysfunctional relationships tying them together usually means that they rarely act as a united threat, and the members of the family are fully prepared to aid the protagonists - or turn on each other - if it serves their purposes.

It's not known exactly when Constance and Hugo first moved into the Murder House, though they likely bought the property at some point between the R. Franklin murders in 1968 and the events of 1983. As a successful car salesman, Hugo had sufficient funds to purchase and maintain the lavish home, though the scale of the place ultimately forced the family to hire Moira O'Hara as a maid. However, despite their apparent prosperity, the Langdons were anything but perfect: Hugo was an absentee father and Constance an outright neglectful mother, often leaving their son Tate unattended for hours on end - a lack of care that might have gotten him killed had Nora Montgomery's ghost not saved him from the Infantata; this exposure to the supernatural forces contained within the house went on to shape much of Tate's personality later in life, and according to some witnesses, it may have even induced him to become a murderer in the first place. The family dysfunction only grew more apparent in the case of Constance's other children, most of whom were subject to mental and emotional abuse as a result of their varying disorders: Adelaide had Down's Syndrome, Beau suffered from Lionitis, and Rose likely being born with no eyes; indeed, Beau spent much of his time chained up in the attic in order to hide his deformity from the public.

The previous owners of the House were well known for being either the perpetrators or victims of horrific murders, and in 1983, the Langdons proved themselves no exception: having been seduced into a one-night stand with Hugo some time ago, Moira politely turned her employer down when he attempted to try again, insisting that the sex had been a mistake; refusing to accept this rejection, Hugo tried to rape her, only to be interrupted when Constance suddenly arrived home. Immediately blaming Moira for "seducing" her husband, Constance shot the maid through the right eye, then shot Hugo three times in the chest; after burying Moira in the back garden and feeding her husband's diced remains to the family dogs, she told Tate that Hugo had simply run away from home - both to spare his feelings and to escape arrest. Unfortunately, this only did more damage to her son's warped psyche in the long run, and the deception ultimately proved completely pointless once Moira and Hugo's ghosts started haunting the building.

With Hugo gone and Constance drinking heavily in his absence, the family finances collapsed, prompting the bank to repossess the house. Soon after their eviction, the house was repopulated by Larry Harvey, his wife and two daughters; however, it wasn't long before Constance made his acquaintance and seduced him, eventually prompting the middle-aged accountant to confess his feelings for her - right in front of his wife Lorraine. Shortly afterwards, Lorraine Harvey burned her children alive, before committing suicide by the same method. Managing to escape any blame for his part in these events, Larry allowed Constance and her children to move back into the Murder House, intending to marry her. However, Tate resented him immensely; his hatred only deepened as the months went by, finally coming to a head when his mother ordered Larry to murder Beau, supposedly in order to keep him from being taken away by Child Services. By then completely infatuated with Constance, Larry obeyed without question and smothered Beauregard with a pillow - unwittingly allowing him to join the ghosts haunting the property.

By this time, Tate had already been experiencing psychopathic fantasies exacerbated by his use of methamphetamine, and the murder of Beau proved to be the final straw. In 1994, Tate confronted his stepfather at work, dousing him in gasoline and setting him alight before leaving for school; though Larry survived, he was left with third-degree burns across the left side of his body, and his fractured state of mind quickly led to him being committed to a mental hospital. Meanwhile, Tate proceeded to Westfield High School, where he shot and killed no less than fifteen of his fellow students, before finally heading home; soon after, a SWAT team descended on the house and confronted the school shooter in his bedroom; apparently unfazed by the danger, Tate made a grab for a handgun, and was immediately shot dead by the armed police. Now without her provider and her favored son, Constance sold the house; however, as Tate's ghost was now haunting the property, she only ended up moving in next-door, where she could keep an eye on her son.

Unfortunately, even in death, Tate's murderous insanity refused to abate: when Chad Warwick and his boyfriend Patrick moved into the house in 2010, Tate began targeting them as potential victims, and eventually made his move on Halloween; disguising himself in Chad's BDS&M suit, he drowned Chad and beat Patrick to death with a fireplace poker, before shooting the corpses in an attempt to make it look like a murder-suicide.

Events of the Series

The Langdons make themselves known to the Harmon family not long after they move in: Constance introduces herself to Vivien Harmon, making a grand show of friendliness while secretly sizing up the latest round of victims for the Murder House; Tate takes up therapy sessions with Ben and befriends his daughter Violet; not long afterwards, Ben finds himself being stalked by Larry Harvey - now released from the mental hospital and supposedly suffering from terminal cancer. Together, all three of them begin subtly chipping away at the fragile composure of the Harmons, either bombarding them with unwelcome details, outright threatening them, or simply exposing them to the house's supernatural aspect. However, Tate quickly outdoes both his mother and his stepfather in sheer villainy: dressing up in Chad's old rubber suit, he sneaks into Vivien's bedroom and has sex with her; having last seen the suit in Ben's possession, Vivien mistakes Tate for her husband, totally unaware that Ben is actually downstairs - and that she's just become the victim of rape by deception.

However, despite the apparent animosity towards the Harmons, the Langdons all play their part in aiding their neighbors against other threats - either because they hope to gain something from them later, or because they have developed a twisted affection for one or more of the Harmons. Tate continues building his relationship with Violet, even rescuing her from a gang of R. Franklin copycat killers; Larry murders Hayden McClaine to keep her from revealing Ben's affair, then helps Ben bury her corpse in the backyard; Constance introduces Violet to a medium and attempts to explain what she's up against by staying at the Murder House - and when Vivien finally gives birth to Tate's child, Constance even provides assistance by keeping Ben focused on the situation despite the ghosts that have arrived to help deliver the baby. However, Constance follows up on this by kidnapping the baby in the aftermath of the Harmons' deaths, deciding to raise him as her own.

Ultimately, the series ends with much of the Langdon family having gone unpunished: though Tate's sexual assault on Vivien has been discovered by Violet and Ben, there's very little they can do to him (given that he's already dead) apart from refusing to interact with him; Constance has escaped with Tate's son, Michael; Hugo is still haunting the building and enjoying on-and-off sex with Hayden. Indeed, the only villainous member of the family to have experienced some kind of formal punishment is Larry - who willingly took the fall for the murders in the hopes of earning Constance's affections. Worse still, Michael Langdon has been revealed to be the Antichrist, and Constance does not appear even slightly troubled by this.

However Tate's villainous and misanthropic behavior was revealed to be a result of the Murder House's malevolent influence, Satan himself. The Murder House was actually built over a portal to Hell itself which allowed the Devil to influence and control the actions of others in the murder house whether they were a living person or a ghost. Tate never truly wanted to do those things, and the guilt of his Satanic-enforced atrocities caused him to repress his memories as just some disturbing fantasy and would temporarily un-repress them when switching between his true compassionate and caring nature and his brainwashed persona. It's even speculated that Tate's spirit was in-fact fully possessed by Satan during his forced rape of Vivien due to him having Satan's pitch black eyes which were also seen when he was possessing a nun before. Tate's troubled and traumatic childhood is what likely made him susceptible to possession since Satan is able to exert his influence onto vulnerable people, like the sexually frustrated Ben Harmon, and the depressed, angsty, and moody Violet, who fell in love with Tate and very much so became the anchor to his restored humanity. 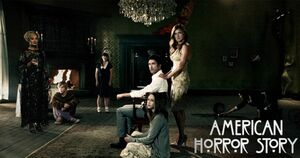