Heir to the throne

Prince of Kinkow
King of Lanada

Become King of Kinkow and get rid of King Brady, Boomer, and Boz to get the crown.(failed/possibly formerly)

Lanny Parker is the main antagonist and anti-hero at the series finale from the Disney XD TV series Pair of Kings. In the final, the Lanada castle is destroyed, so Lanny turns good and helps the Kinkow guards fight Kaita's undead army. He is last seen talking to some villagers in Kinkow, presumably since he has turned good.

He was portrayed by Ryan Ochoa, who also played Chuck Chambers from iCarly.

Lanny is the cousin of King Boomer, King Brady, and King Boz. He was originally the heir to the throne until Brady and Boomer were chosen to be the rulers of Kinkow instead. Since then, Lanny has been attempting to get rid of or kill them. Most of Lanny's plans fail, but he has actually succeeded in a few episodes where he has (temporarily) become king. This is usually thwarted by some sort of predicament and gets Brady and Boomer back on the throne. While most of the characters are aware about Lanny's hatred against the kings, Boomer and Brady are often easily manipulated by Lanny's plans and believe he is kindly helping them. When he is king it results him in getting captured and almost dying as when he was once captured by Zadoc he was almost crush to death.

His most prized possession is Yamakoshi, his talking pet fish, who sometimes helps him with his plans. However, it seems that he is the true schemer against the kings, though Lanny is the one who carries out the plans. Lanny seems to understand Yamakoshi when he speaks, as everyone else only heard bubbles.

The closest time he ever came to murdering the kings was when he fired a cannon, which missed by two inches away from Brady's face. He thinks about ways to kill the kings before he sleeps. As next in line for the throne, Lanny has a certain position of power, enough to be able to force some of the residents of Kinkow into doing his bidding. He also cracks many jokes, mostly offensive. 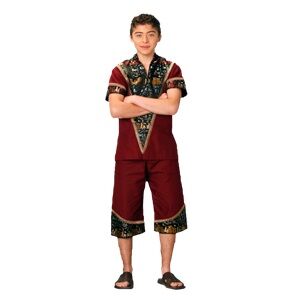