Villains Wiki
Register
Don't have an account?
Sign In
Advertisement
in: One Piece Villains, Anime Villains, Manga Villains,
and 11 more

Geezer (by Trebol and Orlumbus)

Fighting.
Hanging out with the officers of the Donquixote Pirates.
Pleasing Young Master.

Assist Donquixote Doflamingo in his goals.

Lao G is an officer of the Donquixote Pirates' Diamante Army and a major antagonist in the Dressrosa Arc.

He is the oldest member among the officers though he exhibits and experiences many frailties from becoming elderly that would suggest his vitality is dwindling, he is still a highly adept and supremely dangerous fighter.

At the age of 54, Lao G was a member of the Donquixote Pirates, when a 10-years old Trafalgar Law joined. After Law had been with the crew for about a week, Lao G was seen having a meal with the other members of Doflamingo's "family". The crew then learned that Law was sick with the Amber Lead Syndrome and heard how Law escaped the extermination of Flevance. While out on a raid, Lao G and Gladius explained to Baby 5 about the country of Flevance and how its people were inflicted with the Amber Lead Syndrome.

After Law was made an official member of the crew, the Donquixote Pirates spread their influence as they traveled to the Grand Line. They participated in various activities such as looting, making business deals, and collecting bounties. Lao G was also instructed by Doflamingo to teach Law hand-to-hand combat skills.

Six months after Corazon and Law left the crew, the Donquixote Pirates plotted to steal the Ope Ope no Mi from pirates who were going to sell it to the Marines. They later arrived at Minion Island and were informed by Vergo of Corazon's treachery.

While Doflamingo covered part of the island in his birdcage, the Donquixote Pirates raided and looted the Barrels Pirates' hideout. When they found Corazon, they viciously attacked him until Doflamingo arrived. Buffalo and Baby 5 later informed Doflamingo that the Marines stationed at the island took custody of a boy. Thinking that the boy might be Law, the Donquixote Pirates left Corazon for dead and prepared for departure. Before they left the island, they found themselves under fire by Tsuru's squadron.

He participated in Doflamingo's takeover of Dressrosa. After Monet opened the gates to the royal palace, the Donquixote Pirates managed to take control over the palace.

Lao G first appeared in Dressrosa, playing cards with Jora, and asked Doflamingo what he would do to Trafalgar Law.

He later appeared again, when Sugar asked where Doflamingo is. He suggested that Doflamingo was in his room on the fourth floor, only to be told that she already looked there. They then figured that Doflamingo went to Punk Hazard alone. Lao G stated that it is just like Doflamingo to go off on his own while leaving behind his crew.

He next appeared while playing cards again, and declared that Doflamingo's supposed decision to abdicate his throne was absolute when Baby 5 asked them if they saw Trebol. When Trebol, who jokingly asked Baby 5 to marry him, and she started to think he needed her, Lao G and Jora yelled at her not to go there.

He later appeared at the Corrida Colosseum as one of the Donquixote Pirates' representatives in the tournament for theMera Mera no Mi. However, before the first round ended, Lao G was ordered to guard the SMILE factory.

After waiting at the entrance of the factory, he reentered the lift. When the lift reached mid-way to the palace, he was shown battling Thunder Soldier and his group of dwarves without considerable effort.

The lift later reached the palace and Lao G continued to have the upper hand. When the palace shook due to Pica's confrontation with Luffy's group, Baxcon, Nubon and Daikon took the opportunity to pin him down so that Thunder Soldier, Kabu and Rampo could continue going after Doflamingo.

After the toys returned to their original forms, Doflamingo was exposed as a villain and proceeded to implement his "Birdcage" plan. Sometime after Pica relocated the royal palace to the top of the Flower Hill, Lao G and some other officers gathered there to discuss with Doflamingo about plans concerning the Straw Hats and the Marines. Lao G reprimanded Trebol for failing to protect Sugar and Diamante for losing the Mera Mera no Mi.

He was later seen on the second level of the new King's Plateau guarding the palace alongside Machvise, Baby 5, Gladius, and Dellinger.

As Luffy's allies reached the second level, Lao G declared that they will defeat them one by one.

Lao G and his four fellow officers later joined the fray. During the skirmish, Lao G punched Orlumbus in the face.

He was later seen fighting Chinjao, jumping to dodge his signature headbutt. He later kicked Chinjao in the head.

He then got into Yotsu no Kamae and fiercely attacked the legend several times. During Chinjao's argument with Sai, Lao G's life force began leaving his body but then returned when Baby 5 tearfully pleaded for him stay, despite the fact that he did not hear what she said.

After Chinjao granted Sai the title of Don, Lao G performed Jio-Ken Kyukyouku no Higi: Sento Ho Ken and easily defeated Chinjao. He then proceeded to fight Sai, proclaiming that as long as he lived, both Dressrosa and Baby 5 belonged to his master. However, Sai retaliated by kicking his head with a Haki-imbued Kiryu Kirikugi, which split the entire ground they were standing on. Lao G apologized to the young master for his defeat and cursed Sai while falling into the split cracks.

His unconscious body was later brought to the palace alongside the fallen Machvice, Dellinger, and Sugar. Jora intended to use Mansherry and her healing powers to revive him and the others. However, Jora's plan was thwarted thanks to Leo and Kabu arriving and defeating Jora and saving Mansherry.

After Doflamingo's defeat, Lao G and his fellow officers were arrested by the Marines.

Inhuman Physiology: Lao G is a highly adept fighter, as he's one of the officers of the former Shichibukai led Donquixote Pirates. In fact, he is one of the well known fighters of the Corrida Colosseum, where the caliber of fighters is very high.

Master Martial Arts: Lao G is a capable and highly adept fighter, he was able to give Chinjao, a pirate of legendary strength, trouble, being able to knock down Kyros when he was Thunder Soldier, a toy known for his speed and dexterity, he also taught Law hand-to-hand combat.

Pressure Point Intuition: Lao G was shown to deal great injury to Chinjao by hitting in the vitals of his body, he also taught Law during his hand-to-hand combat training.

Old Prime: Given he's the oldest of the Donquixote Pirates, Lao G remains in his prime despite suffering the effects of old age.

Strong Soul: His body became so weak that his spirit may leave it and be ready to pass on, however, he can just as quickly recover from near-death if he feels he has been called back, showing that he still has quite a strong life force.

Youthful Empowerment and Chi Release: Lao G can utilize qigong to store up his energy from youth for future usage against any bodily degradation that may otherwise hinder his combat abilities such as injuries, sicknesses, and old age.

Lao G is a master of a martial arts style known as the Jio-Ken. The techniques utilized all revolve a theme around his advanced age, taking advantage of any debilitating symptoms of an elderly as his fighting stance. With his mastery of Jio-Ken, he could fight and overwhelm Chinjao, who is an extremely powerful master of Hasshoken. Lao G can use the ultimate technique of this style which is to use qigong to conserve his physical vitality during his youth, which he can store up until he needs it, granting him immense strength of his prime once unleashed, thus negating his weaknesses of senescence. 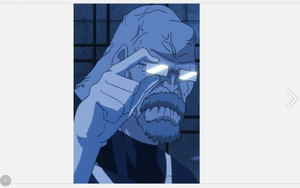 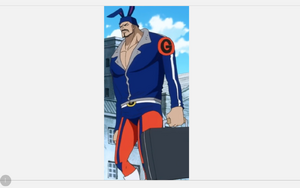 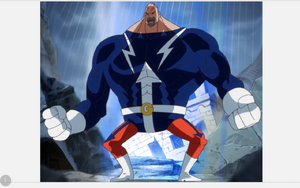