Being with her brother Calvin

Avenge Calvin's death by getting rid of Django (failed).

Lara Lee Candie-Fitzwilly is a supporting antagonist of Django Unchained. She is the widowed sister of Calvin Candie, with whom he may or may not have an incestuous relationship.

She was played by Laura Cayouette.

Candie and his sister, Lara, have dinner with Leonide Moguy, Django and Schultz. During the dinner, Schultz's agreement with the Mandingo goes instantly well and he also wants to buy the German-speaking Broomhilda, claiming that he has missed speaking in his native tongue. Stephen, suspicious of Broomhilda and Django, taunts her about Django and becomes fully aware of her being the wife of Django. Stephen then chats with Candie, informing him that Broomhilda is Django's wife and she is the Schultz's real interest, not the Mandingo. Candie, now aware, tells his sister to leave, then becomes nervous at first and shows Django and Schultz his deceased slave's skull. He breaks the skull with a knife and orders Stephen to bring out Broomhilda. He then becomes enraged that he threatens to kill Broomhilda in front of them unless they can afford to pay the $12,000 to buy her freedom. Schultz agrees.

After Calvin's death, Lara conspires with Stephen to send Django to a mining company to work him to death as revenge for her brother's death. However, after escaping the mining company and finishing off Calvin's remaining men, Django shoots Lara to death in the chest as retribution for sending him to the mining company. Soon after, her lifeless corpse along with Billy Crash's, and the others (including a wounded and incapacitated Stephen) would soon be incinerated in a massive fireball explosion triggered by Django (of which the latter rigged the mansion with a bundle of explosive dynamites and a fuse being lit by Django), killing Stephen and destroying the mansion in the process.

Lara is first seen exiting the Candie Manor when Calvin calls out for her, quote: "Where is my beautiful sister! There she is!". Calvin then introduces her to Django and Dr. Schultz as a wealthy, attractive Southern belle who was recently widowed. Calvin compliments her a "sweet tonic for the tired eyes" before kissing her on the cheek. 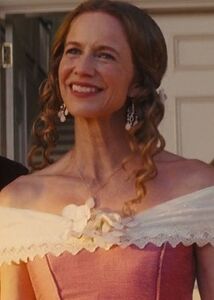 Lara-Lee as she first appears 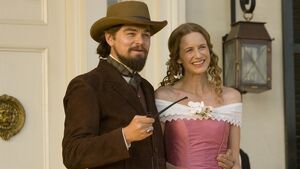 Lara-Lee with her brother, Calvin