Abandon Lee Everett to death at the infested pharmacy.

He was voiced by Terence McGovern.

Larry is first seen in the first episode of the game. He is seen in the pharmacy along with another villain, as well as his daughter Lilly, Doug, Carley and Glenn. When Lee, Kenny, Clementine, Katjaa and Duck came to the pharmacy, Larry spots Duck is attacked by zombie and thought he was bitten. Therefore, he tells to the group to kill Duck before he turns into a zombie.

However, Kenny opposing this idea and they started a discussion. Dependent on player's choice, Kenny and Larry started to a fight or they discussed. When Larry supports to kill Duck, Katjaa says Duck is not bitten and Larry apologizes. Later, a zombie attacks Clementine, later attacks Lee and Carley saves them. When Larry is swearing Carley, he gets heart attack and fainted. Later, Lee gets the nitroglycerin pills from the pharmacy and gives to Lilly.

After the escaping, Larry appears again in the Travelier Motel and stares at Lee. Later, he calls Lee and Lee comes to him. Larry asks him to Lee about does he like his girl, Lilly. Lee can answer him "She's great.", "She's fine.", "Not really." or "Her dad tried to kill me, so...". And Larry revealed that he tried to kill Lee because Lee is a convicted murderer and Lee can hurt innocent people. And Larry threatens Lee about stay away from Lilly and Clementine.

Three months later, Larry is seen in Travelier Motel while building the walls of motel with wooden planks. Later, when Lee, Kenny and Mark cames to the motel with Ben Paul and a wounded David/Travis, Larry swears them and thinks Ben is lying and praises Lilly, later leaves them angrily and continues to building walls. Later, Lilly gives Lee four food items to give only four people. At that time, Larry berates Mark to work harder. And Mark and Larry want the axe from Lee. If Lee gives the axe to Mark, Larry will grouch. If Lee gives the axe to Larry, Lee will say to Larry try not to make much noise and Larry will say he is not stupid. And Mark will say Larry about what Lee told Mark. Mark can ask to Larry about the personal grudge of Lee, his racism, his protective for Lilly or his thinking about Lee is dangerous. If Lee gives Larry a food, Larry will say "This does not make us friends." or "I should shove it to your ass but I'm hungry." or "That girl needs to quit worrying about me". If Lee did not feed Larry, Larry will grouch again and tells "Where is my food?!".

After, the wounded David/Travis dies and reanimates as a zombie and attacks Katjaa. Later, Lee saves her and the zombie attacks Lee. If Lee gives Larry the axe and if Doug is survived. Larry will kill the zombified David/Travis and save Lee and grouch again "You're gonna get us all killed!" and gives Lee the axe back and leaves.

Later, Andrew and Danny St. John come to the motel and offers Lee for came to their dairy. If Lee does not accept this, Larry will grouch again. Later, in the dairy, Larry claims they are good people and feeds them and will praise Brenda St. John as "You are an angel".

When Lee finds out the family are cannibals and the meat is Mark's legs, Lee tells this information to the group. However, Larry didn't believe him and eats the meat (if Lee tells him to eat it). However, when Brenda confirms it, Larry went mad and later, the group is imprisoned by the family.

When Larry punches the door continuously, Larry gets a heart attack and fainted. Kenny becomes scared because Larry could reanimate into a walker. Lilly calls for help and Kenny supports to kill Larry. Lee can help Lilly to help revive Larry or help Kenny to kill Larry. Regardless of player choice, Kenny crushes Larry's head with a salt lick.

Larry is an aggressive and cynical man, with a very unpleasant temper and attitude that tends to annoy others in the group. Despite his attitude, Larry does firmly believe in his daughter's leadership and always supported her. He shows to be very gruff and ruthless, as he was willing to try and kill Duck after believing that the boy was bitten. According to Lily, a lot of things in Larry's life have hardened him, including the loss of his wife.

Larry is also extremely distrusting towards Lee, having knowledge that he is a convicted killer. Whether Lee is tolerable and understanding, or chooses to be nasty back, their relationship still doesn't improve. In the final season, Clementine believes that Larry was racist.

It is revealed that Larry raised his family strictly with a focus on discipline, as he allowed the power to his family's house to get cut in order to teach them not to waste power.

Larry's corpse with Lilly and Lee. 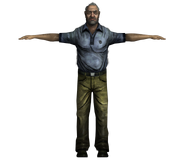