Serving meat to his customers.

Larry Chiang, also known as The Butcher, is one of the bosses or psychopaths featured in the 2006 video game Dead Rising. He is also the last boss in the main mode 72 Hours.

He is a butcher working at the Maintenance Tunnel's Meat Processing Area beneath the Willamette Parkview Mall who has gone insane due to the zombie apocalypse. Frank meets him in "Case 8-4: The Butcher", where he prepares to throw the unconscious and injured Carlito Keyes into the grinder to make ground meat out of him, believing that humans are fresh meat and zombies are spoiled meat.

He is voiced by Michael Yama.

He is a very tall, obese man with brown skin. He is bald, his clothing consisted of a large white sweaty shirt with yellow or red spots, this left part of his body exposed because it was transparent by sweat, black pants and shoes of the same color. He is armed with a Butcher Knife, which he used to murder any individual who came across him.

Larry Chiang is a subject whose sense of reason was uncertain, he believed that to cover the reputation he had in Willamette as the best "Butcher" it was necessary to kill people since their meat was not rotten like that of zombies. He had no mercy in killing people, it seems he took the viral outbreak very lightly.

Larry was the best butcher in Willamette, Colorado, the meat that was served on the family's plates came from Larry's work, he even had a reputation to cover for all his consumers. He did not dislike touching the piles of bags of dead animals with his hands that, over time, he would shred them to take to the supermarket just above meat processing area.

He was a mall worker whose position was very isolated, his position being in the Maintenance Tunnels. Various aspects of his life are unknown, he is only aware of his work in the mall and his actions that gave him a place as a psychopath.

Jessie McCarney and Frank West see Larry on the monitors in the Security Room dragging an injured Carlito to the Meat Processing Area. Jessie tells Frank that Carlito is seriously injured and that if he doesn't hurry up, they'll lose their chance to crack his laptop password.

Frank goes to the Maintenance Tunnels under the mall where he enters into the Meat Processing Area. Inside, Larry puts Carlito onto a meat hook and to be ready to be tossed into a meat grinder. Larry notices Frank and still in a delusional state greets him as a friendly customer, and states that Frank must have come to him to buy some ground meat. Frank, seeing that Larry is insane, tries to reason with him, telling him that he doesn't want to buy ground meat, but instead "has something else in mind". This upsets Larry because he thinks Frank means zombie meat. Larry tells him that he cannot sell his customers such rotten meat and has a reputation to uphold. Larry assures Frank that he knows what he is doing as he is a butcher, and then starts the grinding mill which slowly transports Carlito straight into it.

Frank, with no other choice, must kill the mad butcher before Carlito ends his life in a brutal way.

After the fight, Larry Chiang is killed by West, ending a wave of horrific murders and making the mall momentarily safer. 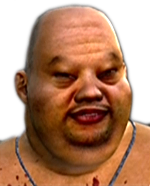 A photo of Larry in Frank's notebook. 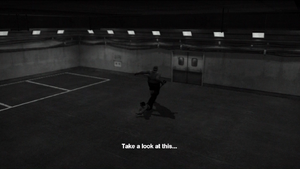 Larry dragging Carlito into his lair. 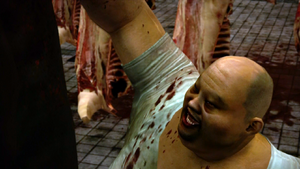 Larry putting Carlito on the hook. 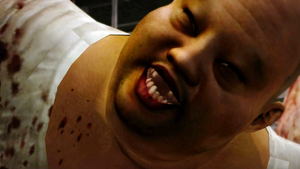 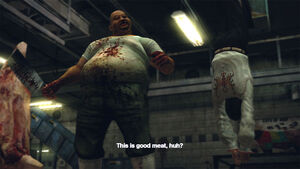 Larry preparing to throw Carlito into a meat grinder. 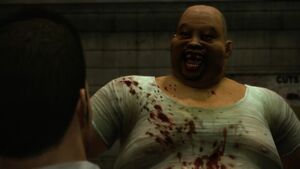 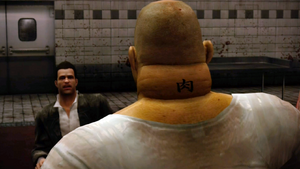 Larry and his tattoo. 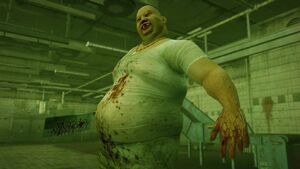 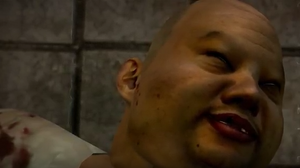 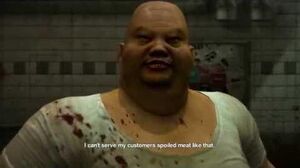