The Cat in the Hat

Marry Joan for her money.

Get rid of Conrad by sending him to military school (both failed).

Lawrence "Larry" Quinn is the main antagonist of the 2003 live-action film adaptation of Dr. Seuss' The Cat in the Hat and the 2003 video game based on it.

He's the Waldens' pompous next-door neighbor whose goal is to marry Joan Walden for her wealth and get rid of her son Conrad by sending him to military school. He is also the arch-nemesis of the Cat and Conrad.

Briefly appearing modest, Larry poses as a salesman to set himself up as the ideal boyfriend to Joan. In reality, however, he’s a greedy and unemployed deadbeat who doesn’t love Joan, and is just using her to gain an easier lifestyle. He also has a manipulative side, which he constantly uses on Joan to get her to concur with him.

Larry has very bad manners, such as belching in front of others and is too lazy to work for a living, sitting around his home watching television. He has an appetite (using a corset to cover up his large stomach, much to his discomfort) and poor hygiene, evidenced by having dentures, dirty laundry and dishes around his home. Despite his laziness, he is ambitious and opportunistic, taking Nevins' second escape as a chance to incriminate Conrad for his irresponsibility. As his goals were looking fruitful, Larry became more callous and controlling towards Joan, not caring about her feelings towards sending her son away. Larry is also shown to be a vain and arrogant hypocrite, as he compliments himself as "perfect" and looks down on others "beneath" him, despite his careless decision to remain impoverished than to seek employment.

He hates Conrad and is constantly rude and demeaning towards him. He wants to get rid of Conrad because he knows too much about his plan. At first, he suggested to send Conrad into military school to straighten up his bad behavior, but it turns out that he only wants to do it to get rid of him. It's possible that he also hates Conrad's sister Sally and pet dog Nevins (along with other children and animals), calling the former a "suck up" for her sycophantic faithfulness to her mother and views the latter an insignificant animal, and even attempting to catch them in trouble with Joan as well. This shows he wants to get rid of not only Conrad, but also Joan's entire family so only he can benefit from her money.

In the end, Larry ends up making a complete fool of himself after trying to turn Joan against her kids, with the only result being a disgusted Joan finally dumping and kicking him out for his actions.

The Cat in the Hat

Larry first appears posing as a business man, returning Joan's dog Nevins to her after Conrad gets into trouble for messing up the house. He believes the disobedient boy should be sent to military school to discipline him, though Joan, despite Conrad's misbehavior, is unsure and believes it's not right for him. Conrad overhears his conversation with his mother (along with the attempted manipulation), saying he isn’t going to military school. Larry immediately displays his arrogance by verbally abusing and provoking Conrad, before reverting to his jolly façade when sensing Joan coming back into hearing range. He then leaves, claiming to have a meeting, though Conrad spots him exiting his car and returning to his house after Joan has driven away from sight.

Later on, Larry sneaks into the Walden household and sees Conrad and Sally jumping on their couch. He exposes his true colors by calling Sally a "suck-up". He then shows his crude mannerisms by stealing some beer and bread and burping in their faces, much to their disgust. He leaves when his allergy to cat dander surfaces after the Cat in the Hat's fur falls near him.

Larry is later revealed to be a lazy, overweight slob in debt. Carelessly refusing to employ himself, he poses as a sales agent to get Joan's approval and hand in marriage from earlier in the film in order to mooch off her wealth. As several repo men arrive to repossess his TV, much to his dismay after he attempts to bribe them with an expired credit card, and leave, he notices Nevins running on the streets again and sees this as an opportunity to get the kids in trouble. He calls Joan on the phone to reports this and brings up his early suggestion of military school, to which she reluctantly considers. Larry instantly hangs up saying he will retrieve Nevins and meet her; his indifference leaving his girlfriend with reservations on her decision as well as suspicion of his intentions.

Larry drags Nevins to his car, planning to deliver him to Joan, but Nevins whizzes on his taco as revenge for kidnapping him.

In a deleted scene, while the Cat, Sally and Conrad pursue Larry with Nevins kidnapped, he encounters the repo truck, as well as the repo men from earlier take his repossessed TV into a TV shop called Safari Sam's. While Larry strikes a deal with the TV salesman about using Joan's money for a new TV, the Cat, Sally and Conrad manage to rescue Nevins, but were almost caught by Larry, so the Cat disguises himself as an animal rug. While Larry starts his deal, the Cat tries to hold in his painful suffering, but when he sees a guy on a pogo stick, the Cat couldn't take it anymore and knocks down the employees and Larry. Larry, angry by this, pursues the Cat, the kids, and Nevins out of the TV store and back into the street.

Larry arrives at Joan's office to deliver Nevins to her. But the Cat (posing himself as a hippie) tricks him into giving Nevins back to the kids. Larry soon realizes the deception after seeing Conrad, Sally and the Cat scamper off with Nevins as they attempt to hurry home. The Cat drags Larry into his secret place, located in a telephone booth and manages to get him lost. Unable to find them after exiting, Larry goes back over to Joan’s office and convince her to go back to the house with him to ensure that her kids were up to no good, constantly nagging her to hurry home. However, they get pulled over by Thing 1 and Thing 2 (posing themselves as police officers).

Seeing the trio in his car, Larry decides to take matters into his own hands by hijacking the Thing's police motorcycle to drive to Joan's house himself and tells her to meet him there while the two Things distract Joan. There, he catches the kids and plans to have them punished by their mother after Conrad tries to warn Larry not to go inside the house as it is complete mess, but Larry cuts him off and escorts the two inside and is surprised to see that the house is clean. At that point, the Cat personally appears to startle Larry, who sneezes and staggers into a wall. He screams "JUDAS PRIEST" while falling off a cliff and down in a purple river, revealing a bizarre dimension known as The Mother of all Messes. Although the house eventually returns to its normal proportions, it immediately collapses.

Upset by the turn of events and that house being ruined, Conrad and Sally angrily dismiss the Cat by making him leave the damaged house, and decide to take full responsibility for what happened and face punishment from their mother. Fortunately, the Cat and the Things fix and clean up the house magically to its original state (much to the kids’ delight). In the meantime, Larry is revealed to have survived his fall. He's covered in purple slime after being flushed from the house through a small sewer pipe. Recovering, a small last dosage splashes on his face over his eyes, greatly grossing him.

After the Cat and the Things have left, Joan returns home to a clean house and warm greetings from her kids and Mrs. Kwan before being startled from behind by Larry. Seething with anger, Larry enters the house, his appearance shocking and disturbing Joan; he hysterically explains the events that occurred, but Joan finds them hard to believe. He tells her she's missing a perfect opportunity and asks her who she'll believe. Joan admits that, despite Conrad's recklessness, she deems he's a good kid and believes in him.

Resolute in her decision, Joan asks Larry to leave her home. He can only whimper her name as she rips the military school brochure in half and plasters it on his sticky chest, and he breaks down in tears before falling on his knees and soon catches a sneeze in his hands, much to Joan's displeasure. Larry desperately attempts to propose, but Joan silently rejects him as she and Sally finally close the door on him as he's heard sobbing in defeat and failure.

It's unknown what happened to Larry afterwards, though another deleted scene shows him exiting the porch while spotting Nevins licking off a purple goo splotch on the walkway. Angered at having lost his chance at a life of luxury, Larry attempts to kick the dog out of spite against the Waldens. To his surprise, the purple goo transforms Nevins into a larger dog and allows him to fight back by ripping Larry's pants off, much to his shock and embarrassment. Nevins then chases a frightened Larry away while the repo men witnessing nonchalantly tow away his car. It's most likely Larry will eventually be homeless from continued unemployment unless he finds real employment or end up in jail by the authorities for civic disturbances.

Larry has taken the lock from the crate and decided to unleash the mother of all messes in the house. The Cat helped get rid of Larry and lock up the crate. 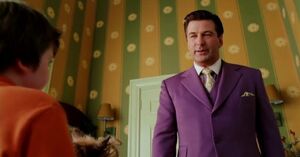 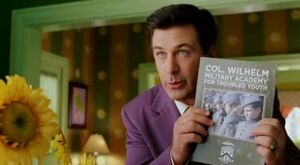 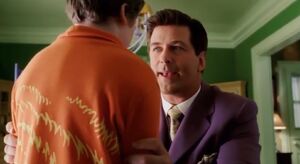 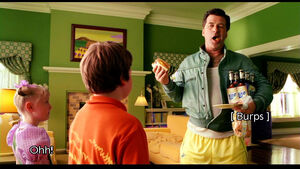 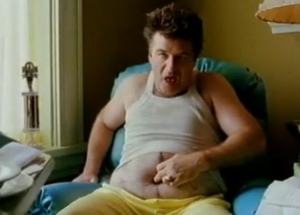 Larry the slob drills into his potbelly while sitting around his house. 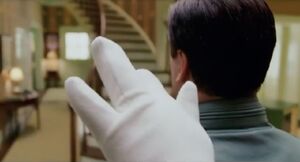 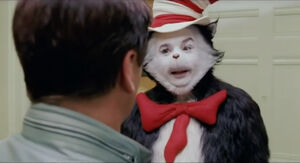 Larry turning around to find himself face to face with Cat in the Hat. 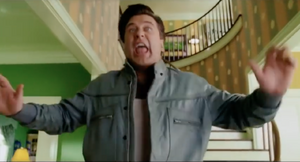 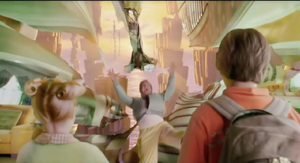 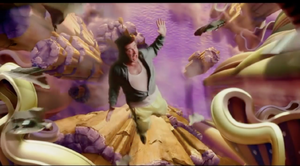 Larry plummeting off a cliff into a pool of purple goo. 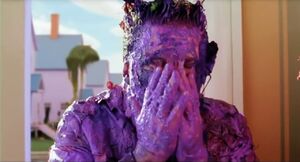 Larry repulsing Joan after sneezes into his hands right in front of her, before she and Sally close the door on him.