Lars is a major character from the Netflix original series, Big Mouth. He is a cynical and depressing middle school boy who can only move around in a motorized wheelchair. Lars began as a rather neutral individual but around the latter half of the third season, he became very controlling of his girlfriend Missy and only became more possessive after she dumped him.

He is voiced by Neil Casey.

In "Smooch or Share", Lars took out a box of matches and started lighting them one by one, as he rode around the gym, tossing them out onto the floor, eventually setting the whole gymnasium on fire.

In "The Department of Puberty", Principal Barron was extremely pissed about the destruction caused to the gym the night before, but she was mostly mad because of the fire damage. Detectives Florez and Dumont vowed to find the student who did that and catch him. However, they never did, meaning that Lars got away with it.

In "Disclosure the Movie: The Musical!", Lars got jealous when his girlfriend, Missy was performing in a play, where she'd be playing as the girlfriend of another person. Lars demanded that Missy drop out of the play or at least change her character so that he wouldn't have to deal with her kissing Nick. Missy told him that it was only acting and that there was nothing he needed to worry about but Lars still got mad at her and started bossing her around as though he was in control of her. Missy got fed up with how domineering and condescending Lars was to her and broke up with him.

In "Super Mouth", Lars became very jealous of Nick, when he started going out with his ex-girlfriend, Missy. When he heard this news, he suddenly got really dark as he claimed that he was going to kill Nick. Lars would use his telekinetic powers to attack Nick in the lunchroom for going out with Missy, repeatedly telling him that Missy belonged to him. Missy denied this by saying that she didn't belong to anyone but Lars completely ignored this and continued to fight Nick for her heart, thinking he could win her back.

Lars teamed up with Andrew to land a second attack on Nick at Golf Lundgren. Andrew planned on using Lars' telekinesis to move Nick's golf ball around so that he would never get a hole in one, which would lead Missy to see him as less of a man and then dump him. Lars scoffed at the weakness of this plan and said that a better idea would be to force-feed Nick a bunch of golf tees until he started bleeding internally and then externally, which would have led to the latter's death. Andrew was disturbed by Lars' plan and thought that murder was too extreme, even for his own standards and refused to be a part of it. Lars' plan was foiled when the Dolph Lundgren Shit Monster arose and started destroying the golf course and even attacking Andrew and Lars. After the fight was over, Nick and Andrew made amends and Andrew backed out of ever doing anything to hurt Nick, leaving Lars on his own.

At the graduation ceremony, Lars got into one last epic supervillain fight with Nick, which started a chain reaction that eventually got the entire school on board with fighting each other with their superpowers. Lars trapped Missy in a soccer goal and threatened to destroy her if she didn't start going out with him again. Missy once again yelled at Lars, telling him that he did not own her and then unleashed her hurricane powers onto him, burning all of his hair off and setting herself free from his grasp before finally cursing him out and leaving him forever.

At home, Missy was crying in her room, heartbroken that all of her boyfriends treated her that way. Mona the Hormone Monstress reassured her that she doesn't need to miss any of them, as all of her exes are shitty little idiots and that she should be happy to finally be rid of them. Missy burned her photos of Nick, Andrew, and Lars and took pride in leaving them all in the dust. 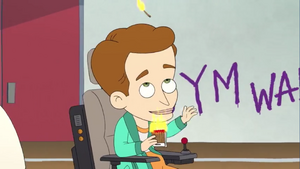 Lars lighting the gymnasium on fire. 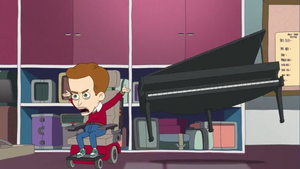 Lars lifting a piano with his telekinesis. 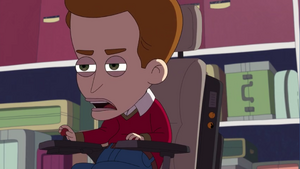 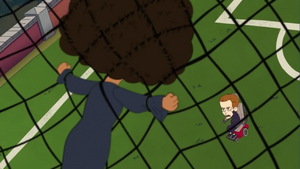 Lars captures Missy and threatens to destroy her if she doesn't go out with him again. 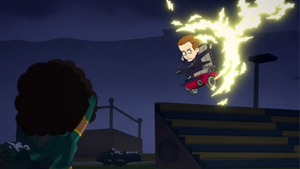 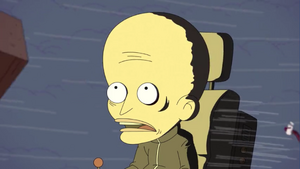 Lars' defeat.
Add a photo to this gallery
Retrieved from "https://villains.fandom.com/wiki/Lars_(Big_Mouth)?oldid=3898497"
Community content is available under CC-BY-SA unless otherwise noted.