Bullying newcomers and Sidekicks.
Hates losing.
Despises being defeated in the game of Save the Citizen.

Lash is a supporting antagonist in Sky High. He is one of the school's two bullies (the other is best friend Speed), and later an ally of Royal Pain.

He was portrayed by Jake Sandvig.

Speed and Lash first appear outside of Sky High as seniors, and approach the freshmen asking for a nonexistent student fee of twenty dollars. Ethan, however, realizes they are lying, and they are dismissed by Student Body President Gwen Grayson (who they will soon form an alliance with if they haven't already). After stuffing Ethan and Zach into lockers, the two bullies are intercepted by Will and Layla, who challenge them in a game of Save the Citizen. During the game that follows, Speed proves himself able to move fast enough to suck the oxygen from opponent Warren Peace with speed itself. The two ultimately lose after Speed is smashed into a pole, stunning him. Lash is already tied to the same makeshift streetlight.

After Gwen reveals herself as Royal Pain, Lash teams up with Stitches, Speed and Penny Lent to trap everyone in the school before they intercept Will and his friends. While Speed pursues Warren, Lash pursues Ethan to the boys' bathroom. However, Ethan tricks Lash into looking down into a toilet and pushes his head into it, leaving him stuck. Ethan would later make Speed slip and lose his balance, allowing Warren to throw a fireball at Speed, sending him to be stuck on a wall.

Following Royal Pain's defeat, Lash is last seen detained in the detention room alongside Royal Pain, Stitches, Speed and Penny. Lash was later sent to prison along with his cohorts for their crimes.

Lash wears a jacket, a shirt, or gym armor, and a striped shirt. Contrary to popular belief, he does not have a unibrow. His bangs cover his eyebrows, creating the illusion.

Lash is known to have elasticity: the power to extend and contract his body and its parts to great lengths. He was able to use his elasticity to convert himself into the equivalent of a giant slingshot. Lash likes to use his ability to stir up trouble, such as tripping Will Stronghold in the cafeteria to provoke a fight with Warren Peace, ups a cup of ginger ale at the Homecoming dance, and snatches Ron Wilson's cap. 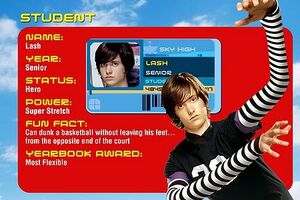