Lashina is a New God and an enemy of Superman in DC comics. She serves as the field leader of Granny's task force, the Female Furies. When Bernadeth was a member of the team, Lashina shared the leader role with her though she hated it. After Granny was defeated by Supergirl, she summoned Lashina and her allies. Lashina has a whip that emits electricity. At one point, Superman was Lashina's lover when he was under Darkseid's control.

Superman eventually broke out of Darkseid's brainwashing but he was confronted by Lashina and the other Female Furies. In Superman:The Animated Series, she was voiced by Diane Michelle, in Batman:Brave and the Bold she was voiced by Nika Futterman and in Smallville she was portrayed by Rochelle Okoye. 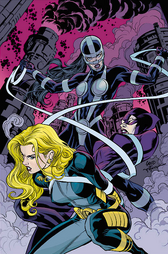 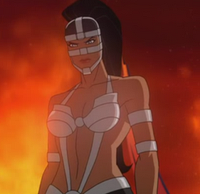 Lashina in Batman: The Brave and the Bold. 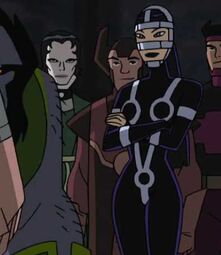 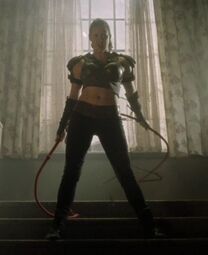 Lashina in Smallville.
Add a photo to this gallery

Retrieved from "https://villains.fandom.com/wiki/Lashina?oldid=4220823"
Community content is available under CC-BY-SA unless otherwise noted.