King of the Frost Giants

King of the Jötunn and Loki's true father

Laufey is the king of the Frost Giants in the Marvel universe and the true father of Loki. He was mortally wounded by Odin in a great battle between Asgard's forces and the Frost Giants. Odin then found the child Loki among the wreckage and adopted him.

Laufey is the secondary antagonist of Thor, with his son being the main antagonist. Laufey plays a similar role to how he does in the comics, but survived his battle with Odin and later fought Thor when he entered Jotunheim, challenging him after two Frost Giants raided Asgard to take the Casket. Laufey spoke with Odin and told him that Thor would get what he came for: war and death.  Later on, Laufey spoke with his son (although he probably did not realize it was his son) and Loki offered him the chance to slay Odin. Laufey accepted.

Laufey then entered Asgard and left Frost Giants to guard Heimdall, who was still frozen. He then knocked Frigga aside and proceeded to the center of the chamber where Odin slept. In short, he was manipulated by Loki into attacking Odin while he was in his Odinsleep, but Loki destroyed his true father using his staff to give false assurance to his mother that he was protecting Asgard.

Laufey in Hulk and the Agents of S.M.A.S.H. 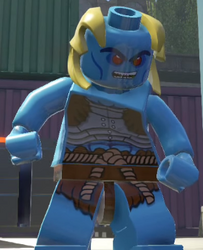