NOTE: This article is about the incarnation of Laufey from the Marvel Cinematic film series. The mainstream version can be found here: Laufey (Marvel).

King of the Frost Giants

Kill Odin Burson, his own son Loki, Thor, and their friends in order to lead The Frost Giants to destroy the entire kingdom of Asgard and to provoke a second war between them (all failed).

Laufey is a supporting antagonist in the Marvel Cinematic Universe, serving as the secondary antagonist of the 2011 movie Thor and a posthumous antagonist in both The Avengers and Loki.

He was the king of the Frost Giants of Jotunheim, and the biological father of Loki Laufeyson.

He was portrayed and voiced by actor Colm Feore, who also played André Linoge in Storm of the Century, Zhylaw in The Chronicles of Riddick, Randall Flynn in Revolution, Donald Menken in The Amazing Spider-Man 2 and The Dollmaker in Gotham.

Laufey was the leader of the Frost Giants. Seeking to give his people to new home world, he led his army to Earth where they invaded a small Viking village and used the Casket of Ancient Winters to slaughter the innocent lives there. This attack put Laufey's army in conflict against the Asgardians and their King Odin, beginning a war. Laufey fought in the front lines of the war, killing the Asgardian Soldiers by freezing them.

The final battle of the war took place on Jotunheim. Laufey and Odin engaged in a one-on-one battle until the Asgardian King came out victorious and Laufey was forced to surrender. To ensure such a terrible war did not occur again, Laufey and Odin agreed to a peace treaty, where the Frost Giants power source, the Casket of Ancient Winters would be taken from them and neither race would attack the other and they could both live peacefully for decades to come. As the Asgardians left the battle, Odin entered a temple to steal the Casket of Ancient Winters. He also found a child who was Laufey's son, left there to die, so he took him as his own.

Years later, Thor, Loki, Sif and the Warriors Three went to Jotunheim to look for an explanation for the Frost Giants' intrusion that they suffered. However, they received an unwelcome visit, though Laufey did give them a chance to go back. When Thor was insulted by one soldier, he attacked the Frost Giant and Laufey ordered his army to attack the Asgardians, even sending a Jotunheim Beast to kill the Warriors Three and Sif.

After a long battle, Thor killed the Jotunheim Beast, but in the chaos Laufey gathered his entire army to overpower the Asgardians. Before they could kill the invaders, Odin arrived on Sleipnir to break up the skirmish. Laufey spoke to his former enemy who attempted to reinstate the peace treaty but Laufey assured him that Thor had caused a war. Laufey attempted to kill the Asgardian King by stabbing him with a ice knife but Odin escaped with his fellow Asgardians.

Later, Loki paid a visit to him in Jotunheim, hinting that he was the one who allowed the Frost Giants into Asgard in the first place. He offered a deal with Laufey, in which he told Laufey to go to Asgard to kill Odin. That way, Loki would be able to take the throne.

Loki allowed Laufey to get into Asgard, having frozen the gatekeeper Heimdall, before leading the Frost Giants to Odin, but Loki stayed behind. Laufey made his way to the unconscious Odin, knocking out Queen Frigga along his way and prepared to kill his enemy. But then, as Laufey stood over Odin, he mocked him before building a knife out of ice to kill him. In a twist of fate, Loki betrayed and killed Laufey by using Gungnir's energy beam to disintegrate him instantly, taking credit for killing the seemingly invading Frost Giant warriors.

This act made Loki look like a hero in front of his adoptive mother as part of his plan to completely destroy Jotunheim and the Frost Giant race as well as usurp the throne of Asgard.

Laufey has very powerful powers and abilities. He is much more powerful than anyone of his men. 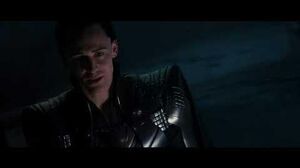