Acting as an imaginary friend.

Laughing Jack is the titular central antagonist/protagonist (depending on the point of view) of the Creepypasta story of the same name, and its prequel The Origin of Laughing Jack. He is a sinister supernatural clown, often posing as an imaginary friend to his victims, who gleefully guts people alive and usually replaces their disemboweled organs with candy.

At first, Laughing Jack was an innocent, sweet and pure-hearted angelic creation, who tried his best to comfort Isaac Grossman, considering how lonely he was. However, Isaac's later actions significantly affected in a particularly negative way the gift, which became more and more disturbed and psychotic with time; Laughing Jack (originally colored) lost his hues as Isaac's actions corrupted it.

Eventually, Laughing Jack became totally black and white, as he reached a point of non-return and fully embraced his demonic form. Currently, Laughing Jack presents himself as a figure of pure evil, remorseless and violent in his very core, who takes pleasure in killing and torturing whoever is in his path, especially those he was once designed to protect (children).

He is also shown to be an extremely intelligent and manipulative cheater, as he tricks lonely children to think he is their friend, then kills them, stuffs them with candies and traps their souls for eternity. He is also a master manipulator as well, knowing human superstitions and their propensities to not believe in the supernatural, which he uses at his advantages.

Created by a guardian angel, Laughing Jack was initially a colorful jack-in-the-box clown whose personality reflected the personality of his owners. He was later sent as a Christmas present to a lonely boy named Isaac Grossman in the 1800s.

Isaac then abandoned Laughing Jack after being sent to boarding school. Laughing Jack grew monochrome and emotionless as a result of his isolation. Meanwhile, Isaac grew up to become a cold-hearted serial killer who kidnapped, tortured and murdered several innocent neighborhood residents. Although horrified at first, Laughing Jack's personality soon emulated Isaac's evil personality. One day, Laughing Jack was accidentally released and he appeared to be a taller, darker and demonic version of himself. Resentful of his traitorous owner, he tortured and killed Isaac with the same weapons he used on his victims.

As time passed, Laughing Jack visited several other children, most of them lonely or neglected, and pretended to be their imaginary friend. However, he would eventually torture and kill them all, with their souls trapped in the nightmarish realm of an abandoned fairground. To make matters worse, the song "Pop Goes the Weasel" plays in the background forever, tormenting them.

In an unspecified year in the modern era, Laughing Jack visited a lonely suburban 5-year-old boy named James, under the guise of an imaginary friend. James told his mother, but she dismissed it as a "phase". One night, his mother had a nightmare, witnessing the souls of Laughing Jack's past victims in an abandoned fairground.

The next day, Laughing Jack places James' action figures on top of his mother's nightstand, presumably as a way to taunt her. She questions James but he simply tells her the truth, much to her disbelief. Later, James receives a handful of candy from Laughing Jack in the garden. His mother notices this and demands him to tell her how he got it.

James again tells her the truth, but she assumes that one of the next-door neighbors gave him the candy. Laughing Jack eventually kills Fido, the family dog, hangs its body on the kitchen light fixtures, and trashes the rest of the kitchen. He also guts its stomach open and replaces it with candy. The mother witnesses this and takes her son next door, where she called the police. The police dismiss it as a robbery, but the mother refutes their assertions, claiming that all of the doors were locked and none of the windows were open during the incident. She presumes that whoever did this was already inside her house prior to the incident.

They both return home and the mother decides to check on her son via the baby monitor. The mother hears a soft moan and enters James' room, where she sees her son nailed on the wall, disemboweled with his eyes gouged and tongue and teeth removed. She also sees Laughing Jack, in his true, monstrous form, who sadistically cackles at the sight of his "work".

Having enough, the mother grabbed a knife and tried to kill Laughing Jack but he simply vanished into a black cloud. This distracted the mother, causing her to accidentally plunge her knife into James' beating heart instead, killing him instantly. The police arrest her and send her to the Phiropoulos House for the Criminally Insane. She claims that being institutionalized is not that bad, despite noting that somebody (presumably Laughing Jack) keeps playing "Pop Goes the Weasel" outside her room. 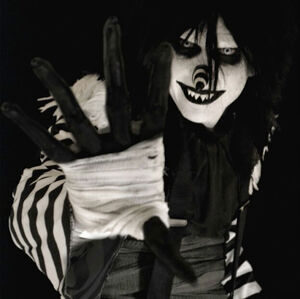 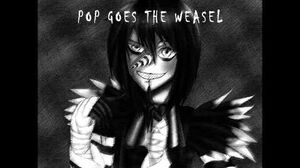 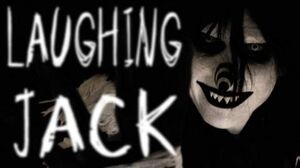 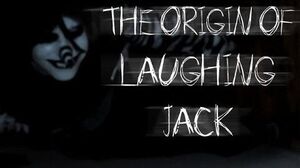 Retrieved from "https://villains.fandom.com/wiki/Laughing_Jack?oldid=3346406"
Community content is available under CC-BY-SA unless otherwise noted.