Laura is a character and former antagonist in the AMC television series The Walking Dead, who serves as a antagonist in Season 7 and Season 8, She is a member of The Saviors. She becomes an anti-hero from Season 9 onwards. She is portrayed by Lindsley Register.

She is described as "wild and reckless but she always has a ton of fun".

At the Savior compound, As Dwight and Laura play table hockey, she repeatedly loses to Dwight and has to continuously take shots of alcohol as Dwight watches on with a grin.

A Savior rummages through the goods that Spencer collected and commends his hard work. Laura sidles up to Spencer and offers to show him their compound if, he plays his cards right. She catches Eugene watching them and calls him out.

When the Saviors unload Rick and Aaron's cargo truck and find the "congrats for winning, but you still lose" note. Enraged at the disrespect, one of the Saviors beats Aaron, believing the note was intended for them. Rick tries to intervene but is stopped by Gary and Laura. Gary joins David and both savagely beat Aaron.

Negan returns to the compound with his new prisoner, Eugene, who shakes with terror as Laura, a female Savior, walks him deep into the bowels of the Sanctuary. She stops their march and opens a door. Eugene is surprised to see she’s taken him to a private apartment, meant for him. As he explores his new digs, Laura reveals that Daryl has escaped. She asks Eugene if he has any leads to his whereabouts; Eugene tells her that he doesn’t and assures her, with sincerity, that he’d tell her if he did. Eugene continues inspecting his new commodities; he is delighted to find the fridge stocked with food and to learn that Laura can get him a meal of his choosing: he first asks for lobster, much to Laura's incredulity, then asks for canned pasta in tomato sauce. He’s disappointed to learn that they’re out of pickles.

Laura shows Eugene around the factory floor and explains the Saviors’ point system, which he’s exempt from; he can take whatever he wants. She gifts him a jar of pickles.

Laura escorts Eugene to the factory floor, where a crowd has gathered around the furnace. Negan enters and points Lucille directly at Eugene. “You are gonna wanna pay close attention to this,” he says.

The First Day of the Rest of Your Life

Though she didn't appear in the episode but possibly appears along with the saviors while Negan saying “We are going to war.”

The Big Scary U

As the Savior lieutenants discuss how to rescue Negan, how to handle workers, and the possibility of a spy among their ranks, Laura bursts into the room, warning everyone that the workers are marching upstairs and that they won't back down. She and the others try to calm down the angry workers and take a knee when Negan returns.

Laura helps Mark barricade a set of doors in the Sanctuary as the zombie horde idles outside. Later, she informs Eugene that Negan has summoned him to the meeting room.

How It's Gotta Be

Laura is with Dwight and a few other Saviors as they are stationed in the back of Alexandria. When Daryl and the other Alexandrians plow through the walls, Laura and the others chase after them. After seeing the blockade of the road, Laura tells Dwight to stop, suspecting an ambush, but Dwight refuses to do so. As a result, they are caught up in an ambush, and she witnesses Dwight gun down his fellow Saviors. She shoots Dwight in the arm and comes to the realization that he was the mole. Before she can be taken down, she flees the scene as Daryl, Rosita and Tara find Dwight wounded but alive.

Though she didn't appear in the episode, Negan finds Laura on the side of the road as he drives toward the Sanctuary. He stops the car and comments on her overall state and invites her to his car to return home. At the Sanctuary, he orders D.J. to keep quiet about Laura's return so she may recover peacefully.

After returning to Dwight's room, Dwight is shocked to find Laura waiting for him. Having been found by Negan on the side of the road, Laura has revealed Dwight's betrayal to him and delights in angrily telling him what she has done while Negan reveals that he used Dwight to pass a fake plan to the Militia so Negan could lead them into a trap. 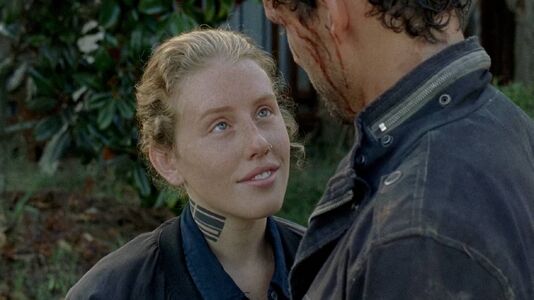 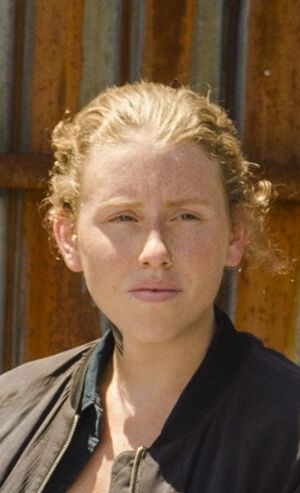 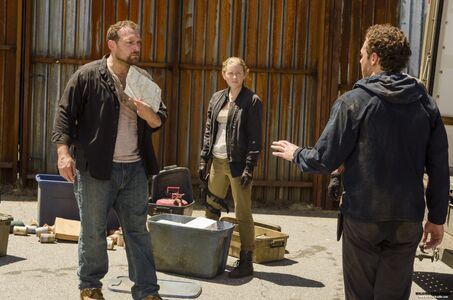 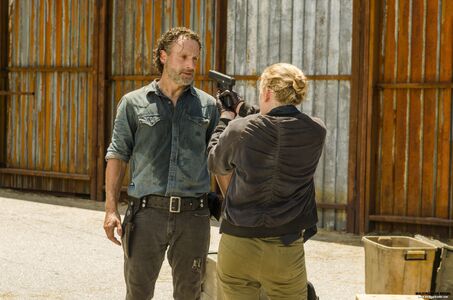 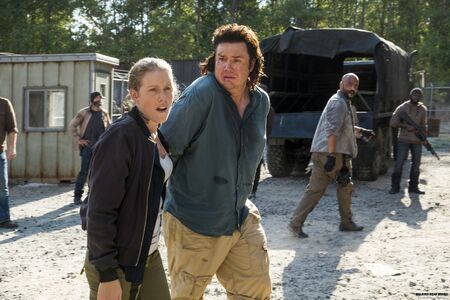 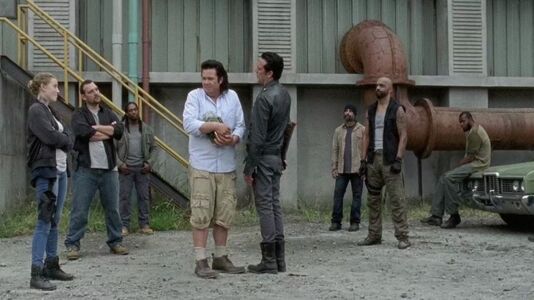