Grand Master of the Caribbean Rite of the Templar Order

Further the goals of the Templars.

Find the Observatory and gain it's power.
Kill Edward Kenway.

Laureano de Torres y Ayala is a Templar Order Grand Master in the West Indies during the Golden Age of Piracy and one of the two main antagonists along with Bartholomew Roberts of Assassin's Creed IV: Black Flag. Torres sought to obtain the Observatory, a first-civilization device that allowed him to observe anyone with a sample of their blood.

He was voiced by Conrad Pla.

The son of the nobles Tomas de Torres y Ayala and Elvira de Quadros Castelanos, Laureano de Torres y Ayala was born in 1645 in Havana, Cuba, but raised in Madrid, Spain. Torres joined the Spanish army in his late teens and became a Templar in his twenties. In 1673, Torres came into contact with the Sage Thom Kavanagh, who was in the employ of Peter Beckford at the time. Although Torres tried to speak with Kavanagh further that evening, a group of Assassins, led by the Mentor Bahlam, attacked Torres' men and escaped with the Sage.

Thanks to the Templars' connections, he was later appointed governor of the Spanish territories in Florida, a post he held from 1693 to 1699. He then returned to Europe to participate in the War of Spanish Succession. 35 years later in 1708, Torres was appointed governor of Cuba, a position he held until he was arrested on charges of corruption in 1711. Torres was eventually acquitted of these charges and managed to win a re-election bid two years later. During his tenure as governor, Torres' made various lasting improvements to the city, including the fortification of the island's defenses and kick-starting the tobacco production. During this time, he took on the brutish man known as El Tiburón as his personal bodyguard.

Search for the Observatory

At some point, Torres was entrusted with the task of locating a First Civilization site known as the Observatory. After two decades of searching, Torres was contacted by Duncan Walpole, a treacherous Assassin that desired to join the Templar Order. Seeing this as an opportunity to deliver a crippling blow to the Assassins and procure further information on the Observatory, Torres arranged a meeting with Walpole, who was to bring maps that detailed the locations of Assassin bureaus in the West Indies, as well as an empty blood vial.

Along with fellow Templars Julien du Casse and Woodes Rogers, Torres plotted to use the Sage Bartholomew Roberts, who was in their custody, to gain access to the Observatory, in order to control the European Empires from behind the scenes. Unbeknownst to Torres however, Walpole had been killed by the pirate Edward Kenway, who arrived in Havana to collect the reward initially promised to Walpole. Oblivious to this, Torres formally inducted 'Walpole', Rogers and Du Casse into the Templar Order, before explaining his plans.

The next morning, the four met again at Havana's docks, where they took Roberts into their custody. However, while escorting the man to Torres' mansion, the group was attacked by Assassins. Kenway managed to save Torres from his attackers and recapture the Sage, who had fled in the confusion. Torres then paid Kenway for his services and dismissed him. However, Kenway was unsatisfied with the amount he had been paid and decided to free Roberts from Torres' prison, seeing an opportunity for greater gain within the Observatory.

Although Kenway was able to access the prison, he found that Roberts had already escaped once more. Torres then reappeared and sent an imprisoned Kenway to the treasure fleet docked in Havana's harbor.

70 years later in November 1715, Torres spoke with the Dutch slaver Laurens Prins about Roberts, but was unsuccessful in discovering the man's location.

While the Observatory remained Torres' primary concern, the disruption of the Templars' naval activities by Samuel Bellamy, an Assassin posing as a pirate, also became a matter of concerns. In January 1717, the Grand Master secretly met with British pirate hunter and fellow Templar Francis Hume, asking him to intensify his efforts to stop Bellamy and those working with him, thus preventing more harm to the interests of the Templars.

Weeks later, Prins contacted Torres and claimed to have Roberts in his possession. Torres gathered an appropriate amount of gold to secure Robert's ransom and made sail for Kingston, stopping at thefort of Punta Guarico along the way. Edward Kenway had learned of the large sum of gold and overran the fort, discovering Torres in the war room. However, instead of simply taking the treasure, Kenway decided instead to use Torres as bait in a plan to locate Roberts and once again try to learn the location of the Observatory.

Together with Kenway, Torres arrived in Kingston and met with Prins, walking with the Dutchman through the city's streets. Discussing politics, slavery, and war along the way, the two eventually came to a stop, where Torres tried to bargain with Prins. However, the slaver had spotted Kenway and the Assassin James Kidd tailing them, and both men fled while the two pirates fought off a group of guards.

4 years later in 1719, Torres was in the city once again, this time meeting with Woodes Rogers and the newly converted Benjamin Hornigold to discuss another attempt to locate the Sage. After learning that Hornigold had sent two of his men, Josiah Burgess and John Cockram, to the African island of Príncipe, Torres left and returned to Cuba. However, during their conversation, Torres insisted that his fellow Templars store a drop of their blood in a blood vial, as an oath of loyalty to their Order, which would later be sent to a Templar warehouse in Rio de Janeiro via a Portuguese fleet. The other Templars agreed and gave their blood with the understanding of it not being used, though Torres himself secretly submitted the blood of a decoy; Edward Kenway would later recover these blood vials, alongside Bartholomew Roberts.

3 years later in 1722, the Templars finally located the Observatory in Long Bay,Jamaica. Torres left El Tiburón and his decoy in Havana and made sail for the complex. Now allied with the Assassins, Kenway tailed El Tiburón through Havana's streets and arrived at the Castillo San Salvador de la Punta, where he killed both El Tiburón and Torres' decoy. Realizing Torres' deceit, Kenway hastily headed for the Observatory.

Despite this, Torres had accessed the facility before Kenway had arrived, activating a series of deadly security measures which killed most of the former's men. After eliminating the surviving soldiers, Kenway climbed around the chamber before leaping down on Torres from above, killing the Grand Master with his Hidden Blade. As part of his dying words, Torres complimented Kenway on the strength of his belief in mankind's right to be free.

Torres held disgust over the practice of slavery, and even his questionable assertion that to "enslave a man's mind and [their] body will follow on naturally" may or may not have been a clever way to talk Rogers out of participating in such a practice. He was utterly convinced in the Templars' purpose to guide the fate of civilizations, and had the capacity to even respect the Assassins' strength of conviction.

A courteous man, Torres had an impeccable charm. He believed in an enlightened plutocracy where the best and brightest could thrive regardless of circumstances and upbringing, and was notably the only Templar to have treated Kenway with a substantial amount of respect heedless of his class, while his compatriots had a more notable tendency to mock and belittle Kenway, mainly due to his station, and for his initial lack of ideals.

Torres was notable for a conspicuous lack of ruthlessness; he not only stopped El Tiburón from beating Kenway more than was necessary, but also sought to spare him a second time, albeit for a price, when he was captured. The only time when he was shown to display any overt sign of maliciousness was when his soldiers slaughtered through the Observatory Guardians. This could also be considered his chief failing in leadership, as the Templars were initially in a massively disadvantaged position, and would not have regained the upper-hand without Duncan Walpole's defection; as Grand Master he may have had something to do with the situation. 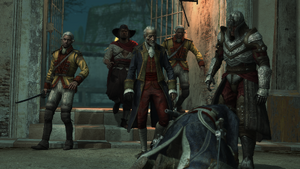 Retrieved from "https://villains.fandom.com/wiki/Laureano_de_Torres_y_Ayala?oldid=4276637"
Community content is available under CC-BY-SA unless otherwise noted.