Founder of the Healing Church

Reach enlightenment with the Great Ones.

Kill the Hunter (both failed).

Laurence (also known as the Laurence, The First Vicar) is an optional boss in the Old Hunters DLC of the video game Bloodborne and is the founder of the Healing Church. Despite not appearing before the DLC and being an optional boss, he is one of the main antagonists of Bloodborne.

Prior to his transformation, Laurence's appearance is unknown. As a Cleric Beast, he mostly resembles a regular Cleric Beast albeit covered in flames. Midway into his boss fight though he is split in half.

Though seemingly mindless and feral like a typical Cleric beast during his fight. This might not be the case as shown when the player first approaches him he is completely passive not attacking until the player approaches with his human skull.

The description of the skull and his reaction in his introduction cutscene implies he wishes to regain his humanity. Prior to his transformation, he was shown to be ambitious almost to the point of arrogance when he decided to use the Old Blood to found the Healing Church despite being warned of how dangerous it was. Though it appears he might have changed of heart at some point before he transformed.

Despite his disagreements with his former Master Willem, he did still have a profound respect for the elder, basing the Healing Church uniforms off of Willem's uniform and including the idea of blind-folding oneself to gain insight.

Like the Cleric Beast Laurence has enhanced strength and agility. Unlike the Regular Cleric Beast, his attacks are infused with fire and his capable of creating explosions, granting him immunity to the beast's common weakness to fire.

Once Laurence has 40% of his health remaining, he tears himself apart and begins crawling towards the player, destroying his legs in the process. He constantly 'bleeds' lava out of his torso and gains the ability to spew fire from his mouth.

Laurence was once a close disciple of Master Willem at his School from Byrgenwerth. He and his fellow scholars found the Chalice Dungeons below Old Yharnam where they found evidence of the Pthumerian civilization and the mysterious Old Blood, believing it to be a holy medium to the Great Ones. Laurence believed that partaking in the Old Blood would be the key to evolving mankind into Great Ones, but Willem feared what this could bring, implying to have known about the beastly effects it had on others, and that they must explore alternatives.

Master Willem led the research on the various objects they found in the old Labyrinth, and concluded that one must not seek above, but inward so that they may "line their brains with eyes" and achieve enlightenment.

Unsatisfied with his Master's solution to the use of blood, Laurence left the college and would soon use the blood to create the institution known as the Healing Church to spread the message of blood-healing, using the blood as a means of curing any and all diseases that ail the public.

The Church would then experiment with this blood in an attempt to create a new "good blood" without the side-effect of the scourge. Meanwhile, Laurence helped Gehrman establish an institutionalized set of hunters to defend the public from beasts, creating the Hunter's workshop.

At some point, Laurence's use of the old blood turned him into a savage Cleric Beast, hunters sent to kill him. Given his fiery appearance, it can be assumed that fire was the primary method used to kill him. His head was later salvaged and placed on an altar in the Healing Church Grand Cathedral, both as an object of worship and could curse his subjects into beasts themselves.

When the Hunter reaches the Grand Cathedral, he/she finds Vicar Amelia preying to Laurence's skull laying on an altar. She prays to it before she becomes a beast, where she then tries to kill the Hunter.

After Vicar Amelia is killed, the Hunter then examines the skull. When he/she touches it, the Hunter receives a vision of Laurence's departure from Willem, who in-turn warns him to "fear the old blood."

Since having become a beast, Laurence is seen in the Hunter's Nightmare, a Hellish dream-realm where all Hunters who succumbed to blood-lust end up, where his body is laying on a stone throne, still glowing from the flames. When the Hunter first approaches it to acquire the Eye Pendant, it has no reaction. Laurence will remain motionless until the player has acquired Laurence's Skull, the item description of which states that he "is destined to seek his skull," possibly explaining why he only moves when the player holds this item.

Once the player returns to Laurence's room with his skull, he awakens and attacks the player. He battles similarly to the Cleric Beast, although his attacks deal much more damage. Once his health is halfway diminished, he rips off his legs and he releases a puddle of lava wherever he goes and can spew it from his mouth. Once dead, he drops the Beast's Embrace rune that can temporarily turn the Hunter into a beast to deal stronger damage using the Beast Claw weapon. 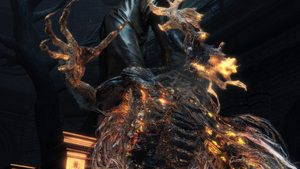 Laurence awakening once he notices his skull with the Hunter. 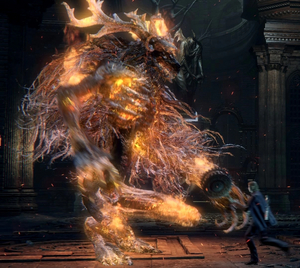 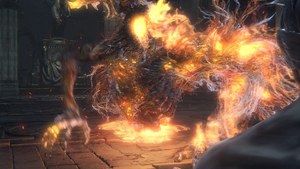 Laurence going berserk after tearing off his legs. 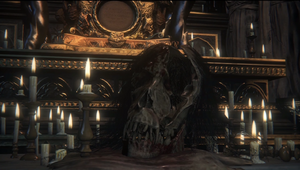 Laurence's skull in the Grand Cathedral.
Add a photo to this gallery 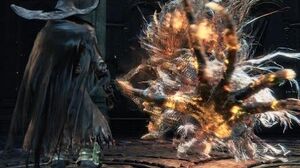 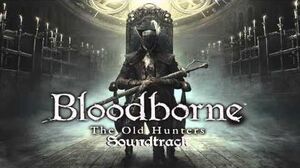 Retrieved from "https://villains.fandom.com/wiki/Laurence?oldid=3968903"
Community content is available under CC-BY-SA unless otherwise noted.