Pyrokinetic Monster
The Lava Lady is a one-time villain from the 2016 reboot of The Powerpuff Girls, only appearing in the episode "Escape From Monster Island". She is a feminine monster who lives in a volcano on Monster Island, made out of fire and lava.

Her vocal sound effects were provided by the late Russi Taylor.

The Powerpuff Girls went to Monster Island to rescue The Mayor. They looked for him in a lava cave and there, from a pit of lava, emerged The Lava Lady. A monster made entirely out of lava and fire. The Lava Lady breathed a bunch of fire on The Powerpuff Girls, but they flew out of the way. Blossom tried to use her ice breath on her, but after she inhaled, Buttercup reminded her that she was jinxed, and therefore she could not talk. She said that because using her ice breath was making stuff come out of her mouth, it counted as talking. Therefore, she could not do it to The Lava Lady. Angered, Blossom exhaled her ice breath through her nose and Buttercup took on The Lava Lady by herself. Buttercup went right up to The Lava Lady's face and antagonized her. The Lava Lady crushed Buttercup between her hands, or so she thought. She opened her hands and saw that there was no Buttercup there. Buttercup quickly darted to the ceiling of the cavern, just before The Lava Lady crushed her hands together. At the ceiling, Buttercup quoted to her, the one liner "You're not so hot.". And she used her laser eyes to cut a giant stalactite down from the ceiling, which fell down on The Lava Lady and crushed her. The stalactite clogged the lava pit she was coming out of perfectly, so The Lava Lady was unable to get out.

The volcano erupted, and a geyser of lava from the lava pit blasted the stalactite into the air, implying that The Lava Lady must have eventually gotten out of there. It was revealed later that she did, as she was seen walking around, outside of the confines of the volcano, so the geyser blasting the stalactite away, must have been what opened the exit door for her, and given her a way out.

Later, The Lava Lady returned, along with a bunch of other monsters, the girls had previously encountered on Monster Island, that day. She breathed a giant gust of fire, and she was ready to attack. Fortunately, The Mayor came in to save the day, by firing a pickle on an arrow, luring all the monsters toward that, so that they would leave the girls alone. The Mayor and The Powerpuff Girls reconciled and The Mayor later told them that he just got rid of his last pickle, just as all of the monsters, including The Lava Lady came back. Buttercup wisely decided that it was time to go, so she and The Powerpuff Girls took off, leaving the monsters behind.

Lava Lady is a giant womanlike monster made out of fire. She is mostly yellow, but her dress is many bright shades of orange and vibrant shades of red. The fire on her head sticks up and the end of it is light orange. She has angry white eyes, firey eyebrows, a giant mouth of sharp teeth, fire on her shoulders, and sharp pointy claws. The bottom of her dress is surrounded by fire.

Lava Lady doesn't have much of a personality, as she's just a monster on Monster Island. She is a reckless, destructive creature, who lights things on fire, attacks people, and crushes things for no particular reason. 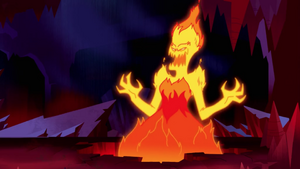 Lava Lady rises from the volcanic pits of doom. 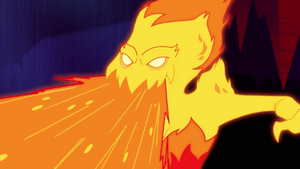 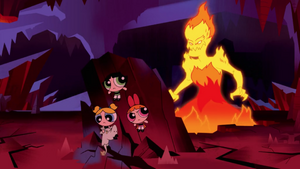 The Powerpuff Girls hide from the Lava Lady. 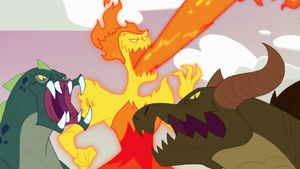 Lava Lady comes back with other monsters of Monster Island. 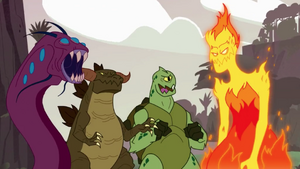 Lava Lady and the monsters of Monster Island.