Journey to the Center of the Earth

Ruler of the volcano

Violent Monster
The Lava Monster is the main antagonist of the Tokyo DisneySea attraction Journey to the Center of the Earth, which is based on the 1864 novel of the same name by the late Jules Verne. It is the dangerous and monstrous ruler of the volcano that scares humans who dare to make a journey through the volcano.

Before boarding elevators to the facility's base station one-half mile below, the guests travel through the caverns and past several of Nemo's labs. Guests get onto steam-powered mine vehicles. The guests make a journey through tunnels into the center of the Earth. After the mining vehicle begins moving through a cavernous chamber of radiant crystals having many colors, the guests then go into a mysterious forest covered chiefly with mushrooms and undergrowth, so that the guests can see unusual creatures living in the forest.

Before the mining vehicle continues a course of action immediately, an earthquake causes a collapse of the tunnel further forward in space. The mining vehicle moves off its planned direction and moves down a side branch. The mining vehicle then moves out and comes into the view on the land along the edge of the Subterranean Sea, and is almost struck by a thunderbolt. During the climax, the guests are now forced into the center of the treacherous volcano. The guests then come in a direct confrontation with the Lava Monster, as the guests hear the roars of the Lava Monster. After they elude the dangerous Lava Monster, the guests eventually come back to the outside of the eruption's wave.

The Lava Monster is hostile, tyrannical, intimidating and aggressive. It is unclear why it is attacking the guests, but it is most likely asserting its territory and opposing any who dare to travel through the volcano. It is also shown to be an extremely dangerous and obstreperous creature, as it roars at the guests while it tries to scare them. It is also likely that it just wants people out of its volcanic environment and wants to rule the underground forever. 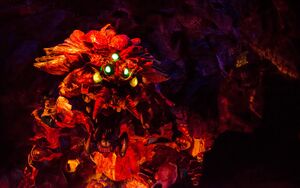 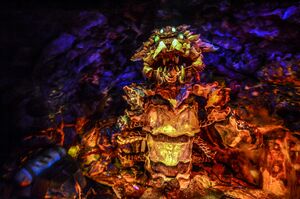 The Lava Monster's evil roar.
Add a photo to this gallery 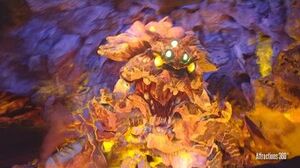 Retrieved from "https://villains.fandom.com/wiki/Lava_Monster_(Journey_to_the_Center_of_the_Earth)?oldid=3890363"
Community content is available under CC-BY-SA unless otherwise noted.