Engraving his past history as a human into rocks.

To die in a fierce duel at the hands of a great fighter so his curse can be lifted and his soul to be taken to Valhalla (succeeded).

The Lava Monster is the main antagonist of the Samurai Jack episode "Jack and the Lava Monster". He is an ancient being who speaks in an archaic manner.

He was voiced by Richard McGonagle.

The Lava Monster is similar in personality to Jack. He is a strong, powerful, persuasive, and forceful warrior who fights for the ones he loves, but takes more pride in his actions. After centuries of torment, he became extremely destructive, suicidal, cruel, and violent. Nonetheless, he still possesses a great sense of honor, refusing to strike an unarmed Jack down when he refused to fight back.

Centuries ago, possibly even around Jack's time, the Lava Monster was a human warrior and leader of a Norwegian tribe. He lived a peaceful life with his loved ones until one day when Aku appeared. Try as they might, the warrior and his forces were crushed almost instantly by Aku. To punish the warrior, Aku sealed him within the Earth and made him immortal, making him unable to pass on and join his people in Valhalla, the hall of slain heroes. After countless years of being stuck in the Earth, the warrior learned how to mold the earth around him to create a shell he could use to move and escape his tomb. He then created a perilous cavern and drew heroes to him, hoping that one would be mighty enough to pass through the cavern safely and defeat him.

While traveling through a field one day, Samurai Jack began to hear a voice calling out to him. The voice soon led him into a treacherous cavern full of booby traps and the corpses of many before him. After successfully reaching the end, the Lava Monster revealed himself and battled Jack. However, seeing the monster's eagerness to fight, Jack refused and sheathed his sword. The monster begged Jack to continue fighting, then told Jack of his past and his desire to pass on to Valhalla, the only way to reach it is to die in true combat with another warrior. Jack decided to resume fighting the Monster to try and free it. After a fierce battle, Jack defeated him and freed the Warrior of his shell, but the Warrior began to rapidly age. The Warrior thanked Jack, and when he died, a pair of Valkyries descended in a beam of light to carry the Warrior to Valhalla. Before he left the cavern, Jack drew on the Warrior's obelisk a picture of the Warrior and the word FREE in stylized runic. When Jack resumed his journey, the Warrior could be seen looking down on him from the heavens in the company of the gods of Asgard, Odin among them.

In "Episode CI", Jack manages to go back to the past and kill Aku, thus preventing Aku from laying siege to Earth. Because of this, it can be assumed the Viking never became the Lava Monster and therefore continues his happy life with his family and village. 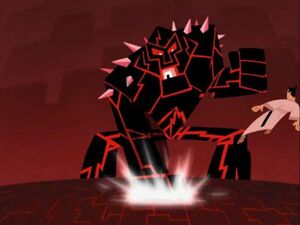 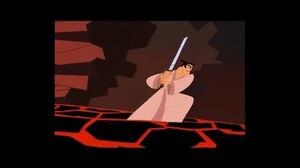 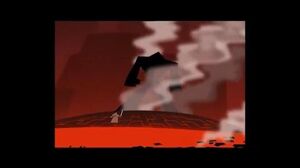 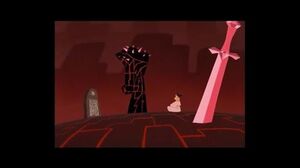 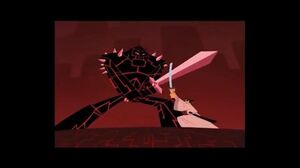 Retrieved from "https://villains.fandom.com/wiki/Lava_Monster_(Samurai_Jack)?oldid=3941904"
Community content is available under CC-BY-SA unless otherwise noted.