Villains Wiki
Register
Don't have an account?
Sign In
in: Demon, My Little Pony Villains, Cartoon Villains,
and 28 more

Master (by his subjects)

King of the Lava Demons

Absorb the magic wands from the Princess Ponies and transform into a crystal being of enormous power (succeeded).

Lavan is one of the antagonists in the 1986 My Little Pony 'n Friends cartoon series. He is the main antagonist in the four-part Season 2 premiere "The Quest of the Princess Ponies". He is a malevolent lava demon, and the king of his people.

He was voiced by James Earl Jones, who also played Darth Vader in Star Wars: A New Hope, Thulsa Doom in Conan the Barbarian, Ommadon in The Flight of Dragons, The Emperor of the Night in Pinocchio and the Emperor of the Night, and the Levram Wizard in the 2003 Teenage Mutant Ninja Turtles TV series.

Lavan is an extremely power-hungry and callous demon who believes that power is all that matters and seeking it above all else. He is also shown to be abusive, brutal and dangerous, often mistreating Sledge and trying to crucify the Princess Ponies on more than one occasion, even going as far as forcing them to jump into lava. He dislikes the Ice Orcs, at one point threatening to murder their leader Gnash.

Lavan kidnaps the Princess Ponies and steals their magic wands, since they contain all the magic in Ponyland. He tried to use them to transform himself into an all-powerful crystal being. It did not work so well at first, upsetting the balance of Pony Land.

Lavan attacked him, and later found Spike, the Princess Ponies, and his enemy Gnash, and imprisoned them in the dungeon, from which they were released by Sludge, who was tired of Lavan's abuse.

While Lavan's abuse of the wands began turning Pony Land to crystal, Lavan completed his crystal transformation. When the Princess Ponies found the wands, drained of power, Lavan attacked them, but they escaped after Princess Tiffany and Megan arrived.

They found the Heart of Pony Land, which was used to recharge the wands, but Lavan attacked them. Sludge knocked him into the lava, from which he emerged again only to be frozen by Gnash. By the time he broke free, the Princess Ponies had their wands back. Working together, they used their magic to send Lavan's rainbow beam back at him, destroying him.

Being a lava creature, Lavan possesses heat-based powers and is immune to fire attacks. His body is naturally very hot and he can emit intense heat from his hands, or control the magma and lava around him, so he can create waves (erupting them from the ground like volcanoes) and ride them like a surfer. As to be expected, he's also quite strong, being able to crush rocks in his palms with ease.

Beyond fire-centric attacks, he is also capable of absorbing magic from his hands, however absorbing all wands from the Princess Ponies at the same time proved too much from him, warping reality on accident. When he later tried to do it one wand at a time, he started to transform into a crystal being of enormous power, as he had desired from the start, and this also caused all of Ponyland to become crystal as well. His attacks were now rainbow-colored and packed even more power, too much power in fact, as a single beam redirected back at him was enough to shatter him to pieces.

A pit of lava in his throne room was also used to observe events on the surface, so he may possess more magic than what he showed. 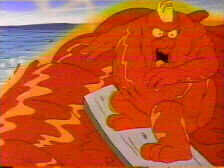 Lavan emerges from the earth, surfing on a wave of lava 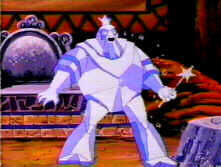 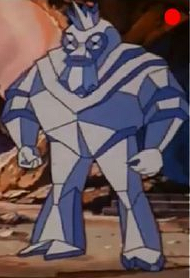 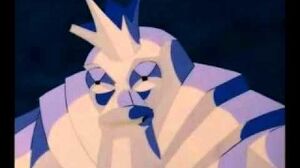