Being successful in life.

Lawrence is the secondary antagonist in Disney's 49th full-length animated feature film The Princess and the Frog, which is based on the 2002 children's novel The Frog Princess by E.D. Baker and the German fairytale The Frog Prince by the Brothers Grimm. He is the former royal valet of Prince Naveen and Dr. Facilier's associate.

He was voiced by Peter Bartlett.

Lawrence was initially Naveen's servant, but due to his envy for the Prince's respected life, Lawrence eventually turned to the dark side and worked as Doctor Facilier's minion.

Lawrence is first seen arriving in New Orleans alongside Naveen via riverboat. Reason being, the prince has been cut off from his parents' Royal Fortune and must find a way to marry back into wealth.

Sometime after disembarking, however, the overworked valet loses the prince, but eventually finds him in the streets of the French Quarter, dancing and partying with the locals. Knowing that they are supposed to meet with Charlotte La Bouff (whom Naveen is set to woo and marry) and her father, Eli "Big Daddy" La Bouff, Lawrence urges the prince to end his festivities, only to be publicly humiliated by Naveen's sassy remarks and actions.

After the commotion, the duo encounters a shadowy figure; a witch doctor by the name of Dr. Facilier, who leads them to his lair in an alley. The doctor manipulates Naveen into believing that he's receiving the chance to regain his wealth without marriage and offers Lawrence a chance to live the life of a prince. Naveen reluctantly accepts and Lawrence does the same, albeit eagerly and immediately, thus setting the deal in motion. However, the true motives of Facilier is to have Lawrence become his minion, transform him into an exact clone of Naveen (who had been turned into a frog), and have him marry Charlotte. Once he does, Facilier will murder Big Daddy, thus allowing Lawrence to inherit the family fortune. The two villains then plan to split the money and live the rest of their lives wealthy beyond belief. Whilst a disguised Lawrence heads to Charlotte's masquerade ball to begin the plot, Naveen was imprisoned. At the ball, Charlotte and Lawrence share a waltz, and in during which, Naveen manages to escape, thanks to Lawrence having loosened the lid on his jar when the transformed prince seemed to be suffocating. This leads Naveen into meeting Charlotte's friend Tiana, whom he attempts to kiss in an effort to break the spell, only to turn her into a frog as well.

In the resulting chaos following the two frogs' escape, Lawrence scurried off to the guest house to check whether Naveen was still there, only to find a crossed Facilier waiting for him. Lawrence then began to have second thoughts about the scheme and tore off the talisman, reverting to his true appearance. Telling Facilier to wear it himself, Lawrence casually threw it. Panicking, Facilier caught the talisman before it hit the floor and warned Lawrence that he cannot risk it being destroyed. Calming down, Facilier demonstrated that his own voodoo does not work on himself by wearing it. He then convinced Lawrence to proceed with the scheme by playing on his resentment against the upper class. Fearing what they would do now that the prince has fled, Facilier reassures Lawrence that everything is well, so long as they have the prince's blood in a special talisman that gives the former valet the ability to morph into Naveen.

The next day, the blood begins to run low, causing Lawrence's disguise to fade away. Fortunately for him, he manages to propose to Charlotte before his cover is blown, but a frustrated Facilier voices concern, confessing he's now reduced to asking for help from his friends on the other side. Back at his lair, Facilier commands a legion of shadow demons to find and capture Naveen. As they're out searching, Lawrence keeps clear of Charlotte, up until the night of their wedding, when the shadows finally return with the frog prince in their possessions. Lawrence extracts the Royal Blood and returns to his princely disguise, heading out to join the festivities of Mardi Gras as the wedding ceremony begins. Before their marriage is sealed, however, Naveen is freed from his prison by his firefly friend, Ray, and battles Lawrence for the talisman. The wedding is put to a halt and Lawrence rushes into a nearby church, with Naveen in his grip. Before he's able to confine him yet again, the frog prince manages to steal the talisman and passes it over to Ray, who escapes. Lawrence is ordered to stay out of sight by the doctor whilst the latter and his shadow demons rush out to retrieve the necklace.

As Lawrence stays put with Naveen, Facilier meets his demise at the hands of Tiana, who successfully destroys the talisman, thus ending the villainous plot for good. Meanwhile, after Mardi Gras has come to a close, Charlotte begins to confront her fiancé, only to find the snide Lawrence, in his true form. The southern belle screams in disgust, causing Lawrence to flee the scene in fear, discarding Naveen as he does. Big Daddy is informed of the impersonating situation and orders for Lawrence's arrest. Despite his pleads for freedom and claims that he was completely manipulated by Facilier, Lawrence is apprehended and taken to the Parish Prison. How long Lawrence's sentence in prison will last is currently unknown or if he even will stay in prison is unknown (since they don't have any actual evidence against him).

Though he serves as an antagonist in the film, Lawrence is not exactly evil by design and is driven to villainy out of constant neglect and disrespect throughout his life. He is easily annoyed by Naveen's laziness and rambunctious antics, and he voices his opinions on the matter frequently, only to be ignored by the formerly selfish prince time and time again. Not only that, due to Naveen, Lawrence is often publicly humiliated, another reason for his eventual treachery. All of these factors would eventually lead Lawrence down a dark path, and it has been shown that he someday wishes to overthrow Naveen to have a taste of the power and respect that he believes he deserves.

However, even after his deal with Dr. Facilier, Lawrence's true nature (one ultimately gentle and sympathetic) overcomes his villainy occasionally, as he was seen with a hint of guilt for betraying Naveen thrice; the first instance was during the climax of "Friends on the Other Side", where Lawrence (despite initially being thrilled with Facilier's offer) showed extreme horror and regret at what the witch doctor's spell had done to Naveen. After imprisoning Naveen in a jar to prevent him from interfering with Facilier's scheme, Lawrence was extremely demonstrative and sympathetic towards the prince and loosened the lid to ensure that he didn't suffocate — so much so, that Naveen was able to escape, implying he removed the lid altogether. Finally, Lawrence made a legitimate attempt to revoke his deal with Facilier, unwilling to engage in a further villainous activity, but he was manipulated by the smooth-talking and persuasive doctor to allow his greed and abusive past to consume his senses, thus continuing on with the scheme.

With that said, Lawrence is ultimately an incredibly greedy, avaricious, and manipulative man, which acts as the prime motivation to his collaborative action with Facilier. Hints of his greed could even be seen during his and Naveen's arrival in New Orleans, where he wholeheartedly supported the selfish idea of marrying a woman strictly for her money and advised Naveen to do so, to overcome life following his cut from the royal fortune. 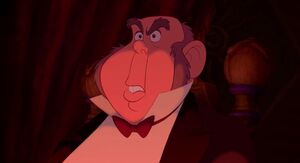 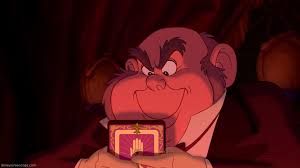 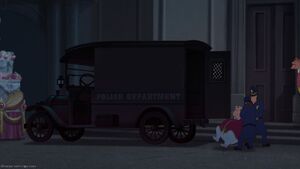 Lawrence's defeat.
Add a photo to this gallery

Retrieved from "https://villains.fandom.com/wiki/Lawrence_(Disney)?oldid=3827421"
Community content is available under CC-BY-SA unless otherwise noted.