Member of The Tyrants

Private Military Contractor of Belltower Associates
Agent of the Illuminati

Killing enemies of the Illuminati.

Following the orders of Jaron Namir.

Kill and Terminate all enemies of the Illuminati.

Lawrence Barrett is a character and is an antagonist of the sci-fi shooter, Deus Ex: Human Revolution. He is a member of the augmented Black-Ops team known as The Tyrants and assassinates enemies of the secret society, The Illuminati. Barret is also a private military contractor of the PMC Organization, the Belltower Associates.

Barret was born in the United States sometime in 1992 to an abusive father as implied by dialouge. He was then founded and recruited into The Tyrants organization by its leader, Jaron Namir and began to fight and kill enemies of the Illuminati throughout his career with them. He recieved an itense amount of human augmentations all over his body and were provided to him by the augmentation corporation Tai Yong Medical. At one point during Deus Ex: Icarus Effect, Barret and Ben Saxon got into a fight and he got hurt and resulted in the scar and augmentation on his left eye.

Sometime in the year 2027, Barret along with Yelena Fedorova and Namir were deployed to Detroit to attack and destroy the research made by Sarif Industries on human evolution and the advancements of human augmentations. Barret, Yelena, Namir, and a company of augmented mercenaries acompanyed them as they ravaged the facility. Barret is first seen where he strangles a Sarif Researcher and then kills another one by brutally gunning him down with his minigun arm. He and the rest of the Tyrants escape the facility after Megan Reed is kidnapped and Adam Jensen is supposedly shot dead by Namir.

Six months later, Adam Jensen comes back and he begins to hunt down the members of The Tyrants. Barret was tasked with acquiring a microchip out of a member of Purity First but Jensen got to it quicker and acquired the chip. Barret and the rest of The Tyrants them decide to regroup and meet up at Highland Park where a FEMA Camp has been built in secrecy. Jensen follows them there and finally faces the men who murdered Megan's team when Barret takes Jensen and throws him across the room. Yelena and Namir both leave while Barret fights Adam Jensen alone. Barret and Jensen fight but Jensen wins and defeats Barret. Adam then demands where the rest of the Tyrants went when Barret takes out a grenade but Jensen escapes and it explodes effectivily killing him.

Lawrence Barret is a gigantic brute to say the least. He is extremely well-built and has massive amounts of human augmentations all over his body to support his strength. He has a bulky face and his lower-jaw is augmented along with his left eye. He has a buzz cut and has light brown/dark tan colored hair. He also has a nosering piercing.

Barrett is shown to be sadistic, as he states 'Oh, that's going to be a pleasure' when ordered by Namir to get rid of Adam. He is also quite the trash-talker, constantly calling Adam names such as 'greenhorn' during the battle. He is also very loyal to Namir, always doing whatever he commands without question. 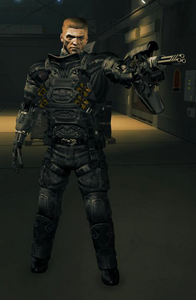 Barret during his boss battle 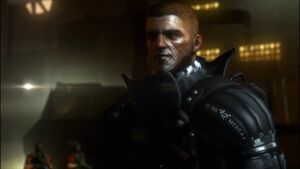 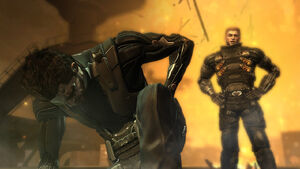 Lawrence with his chain gun arm 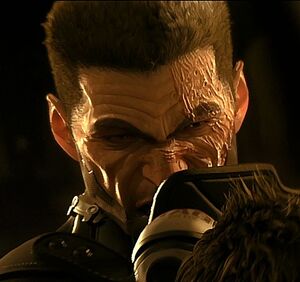 Barret uses one of his many grenades 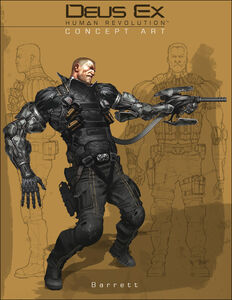 Concept Art
Add a photo to this gallery
Retrieved from "https://villains.fandom.com/wiki/Lawrence_Barrett?oldid=3582621"
Community content is available under CC-BY-SA unless otherwise noted.