Kidnapping and torturing young female students from the local university.

Prevent SWAT officers from taking Melinda Kline from him (failed).

Lawrence Fairfax is a serial killer and one of the suspects in the 2006 video game SWAT 4 mission "Fairfax Residence". He is a carpenter employed at a local university and son of Gladys Fairfax, who the latter become a main suspect in series of the brutal and grisly homicides of female students from the university he works.

He was voiced by Adam Arian.

Lawrence grew up with his single mother Gladys Fairfax at house number 25 on Glendive Lane in Fairfiew. Lawrence must have had a difficult childhood because he saw himself as a monster, judging by the drawings and paintings on the walls found in his old bedroom. He also showed signs of mental illness which his mother Gladys either underestimated or more likely did not notice.

After completing his education, Fairfax was employed as a carpenter for renovation works at the local university. Fairfax was never sentenced, which is why there are no files in the police, but he was dismissed for stealing materials that he later used in the basement of his home to build a chamber to hold his victims. His co-workers did not say much about him because he was considered a social recluse and did not talk to anyone. During his work and visits to the university library he often chose potential victims among female students. He managed to kidnap seven students who were imprisoned, tortured, starved, raped and constantly watched from one to even three weeks. Their corpses always showed signs of torture and dismemberment, and Lawrence himself was very careful when murdering his victims and disposing their corpses because, the police failed to match the perpetrator's DNA. However, with the last victim named Rachel Polson, the police managed to find Lawrence Fairfax's DNA. Unfortunately, Fairfax managed to kidnap another student named Melinda Kline. The kidnapping took place six days before finding Rachel's corpse, which is why Melinda can still live, so rescuing her is a top priority for the SWAT unit.

On October 23, 2008, at 04:43, the SWAT team enters the Fairfax House to arrest or eventually kill Lawrence Fairfax and save his victim Melinda Kline. Inside, the officers meet the mother of the suspect Gladys Fairfax, who tells them to leave their home, adding that her son has done nothing. The woman clearly knew nothing about the actions of her mentally unstable son. In the basement, the team finds his bedroom, where the walls are full of old newspapers with headlines about his murders and arrest warrants. Behind the bedroom is the entrance to his "workshop" more like a torture room full of hanging masks made of newspapers, female body parts (arms, legs, heads, torsos) also made of newspapers and Tammy Wilson, which is not Melinda. Behind the workshop is an underground tunnel leading to a dingy and dark chamber in which Fairfax was holding his victims including Melinda Kline. Fairfax also installed cameras in the chamber and studio to observe its victims at all times. While trying to arrest Fairfax, he clearly has a mental disorder because he addresses his victims as his "darlings" and has set up various traps for uninvited guests throughout the house.

Lawrence is seen in the basement part of the mission depending on RNG there are three places he would appear is most commonly in his room, the workshop or the prisoner's chamber with Melinda, he is armed with a shotgun when facing him, in Elite difficulty he would have a accomplice who would have a handgun, arresting him would trigger a special dialogue. 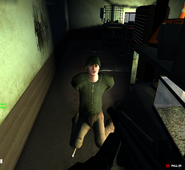