Ability to keep his composure

Lawrence III is the main antagonist of the Pokémon film Pokémon: The Movie 2000.

He was voiced by Takeshi Kaga in Japanese and Neil Stewart in English.

Lawrence III is first seen in his large airship reading a prophecy. He thinks that the prophecy was about him and that he is the Chosen One. He then sets to work on capturing the three legendary birds so that he could draw out Lugia, which he also plans to capture.

Using various weapons from his ship, he injures Moltres and captures it with electrical rings rather than a Poké Ball. This disturbed the harmony of the legendary birds, threatening to destroy the world with a raging current called the Beast of the Sea, although Lawrence III seemed oblivious to this, focusing primarily on his plan to capture Lugia. Making it feel like a game of chess, he then captured Zapdos when it moved to Fire Island, thinking that Moltres left. He also captured Ash and his friends when they were in a boat and brought them aboard his ship to see his crowning achievements.

However, he did not foresee that the group, especially Ash, would not take kindly to his method of capture of the two legendary Pokemon. As he attempted to capture Articuno for his collection, Ash, using the combined power of his Pikachu, Charizard, Squirtle, and Bulbasaur freed Moltres from its device. Moltres then freed Zapdos from its electric cage, but then the two started fighting, destroying part of the ship, and allowing Articuno to join them in the battle. Lawrence III's ship crashed on Lightning Island.

As the prophecy said, Lugia did rise from the sea to stop the fighting of Articuno, Zapdos, and Moltres, and Lawrence III, still intent on capturing it, decides to capture it just like he did with Moltres and Zapdos. Though Lugia managed to break free and destroy the remains of his ship with Aeroblast, Lawrence III survived the destruction. Finding his Ancient Mew card, Lawrence III vows to start his collection again, but this time on a smaller number. It is also explained in the novelization of the movie that he would not capture Lugia again.

Lawrence III has no super powers, but he is greedy and is not a very pleasant man.

Lawrence III is largely characterized by his greed, which caused him to be rather short-sighted about the consequences of his actions, which nearly became his downfall. Unlike most villains, he's shown to realize the error of his ways, displayed at the end of the movie.

He's also shown to be honorable, using formal honorifics when addressing others (referring to Misty as a "young lady"). Lawrence III has never been shown losing his composure at all, even as his ship's crashed and could've been killed by Lugia's Aeroblast. 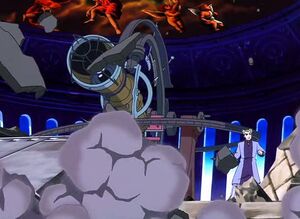