Firing employees to have more money for himself.

Take over Rich Industries (succeeded for a time).

Lawrence Van Dough is the main antagonist of the 1994 Richie Rich film.

He is a greedy and scheming corporate executive who plots to murder the Riches, take over the family business and steal their wealth with the help of Ferguson, Richie's corrupt bodyguard.

He was portrayed by John Larroquette, who also played Joey Heric on The Practice and David Bedford in Blind Date.

Lawrence Van Dough joined Rich Inc. in the past, eventually working his way up to financial executive. It is implied that he is unhappy in his job, as he envies the Rich family's success. He succeeds in bombing their private jet (which they survive) and framing the butler Cadbury, at which point he takes over Rich Industries and fires nearly all the Rich family's servants and employees. He later deliberately rescues the Riches in order to gain access to the family vault inside Mount Richmore.

After Richard and Regina Rich open the vault, he excitedly walks inside. But his joy then turns to anger when he finds that there is nothing in the vault except antiques and family memories. He demands an explanation to where the riches are and finds out that they are all in the banks, stock market and real estate as the Rich family do not value money.

When Richie arrives at Mount Richmore to rescue his parents, Van Dough attempts to shoot him, but he is unharmed thanks to one of Professor Keenbean's inventions, which rendered his clothes bulletproof. After a climatic showdown on the face of Mount Richmore, Richard allows Richie to fire Van Dough, even though he has made a lifelong practice of never terminating employees, along with Regina giving him a punch in the face. Van Dough is then arrested along with Ferguson, and later is seen watching Richie and his friends play a baseball game, while doing gardening as part of their work release. Richie hits a home run and the ball lands at Van Dough's feet. However instead of throwing it back, he tosses it into the fountain in humiliated resentment. 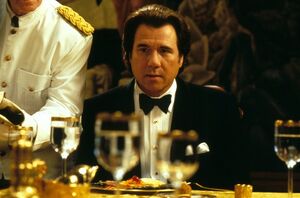 Retrieved from "https://villains.fandom.com/wiki/Lawrence_Van_Dough?oldid=3890366"
Community content is available under CC-BY-SA unless otherwise noted.