Laylamon, known as Lilithmon is a minor villain in the Digimon franchise. One of the Seven Great Demon Lords, the most powerful of all Demon Lord and Fallen Angel Digimon, she confounds her opponents with her bewitchingly lovely appearance while her right arm's claws corrodes everything they touch.

Laylamon is a Mega-Level Digimon whose appearance is that of a pale woman with 2 gold horns and black hair, wearing purple robes resembling a demonic version of a feudal Japanese courtesan over a leather catsuit. The most dominant feature in Laylamon's appearance is the Nazar Nail covering her right arm. In her Darkness form, Laylamon wears a cape, has Vilemons on her chest and crotch, and wields Blastmon's head like a mace as a weapon. In her Majuu form, she becomes a giant monster. Laylamon's eyes are purple, and has the rest of her body red. She has two monstrous feet, and Blastmon's head in the front, and his spikes surround Laylamon's monstrous body.

Laylamon is nasty. She will not hesitate to take what is hers. Laylamon is very murderous, like when she killed a SkullScorpiomon after he sent her a failed message and almost killed Reapmon with her poisonous claws.

Laylamon is one of the members of Seven Great Demon Lords. She was created by a person that contained lust and the Code Key of Lust. She was eventually defeated by DATS.

In Digimon Fusion she is referred to as Laylamon. As one of the Three Generals of the Bagra Army, Laylamon first made her existence known to the Fusion Fighters when they arrived at the Lake Zone area she was in the process of conquering. She she used a mirror to manipulate Angie Hinomoto into stealing the Lake Zone Code Crown for her, but it ended with her being scarred by Angie. Losing her cool over it, Laylamon forced a combination of herself, Daipenmon and the frozen IceDevimon to before being driven off by w:c:hero:Shoutmon X4K. Laylamon later confronts them in the Sand Zone, revealing she sent Ebemon to wipe out the Warriors of the Light save Reapmon. Learning the truth behind his sect's destruction he attempted to attack her but was mortally wounded with w:c:hero:Mikey Kudo saving him and allowing him to reformat into Beelzemon to help in the fight against Machinedramon. Laylamon later obtained a traveling companion in Damemon, unaware that he was Team Midnight's Tuwarmon until after Lord Bagra obtained the complete Code Crown with Midnight revealed to be a branch of the Bagra Army.

Being the only active Bagra Army Officer left and despite the hard work she had done Laylamon found herself overshadowed by the Dark Generals as she was transferred to Midnight, now the Twilight Army to be of service to its human general Ewan Amano along with the bodiless Blastmon and his Vilemon minions. Though Ewan's w:c:evil:Darkness Loader Laylamon could fuse with Blastmon and the Vilemon to form Laylamon Combined and aid Twilight in their fights with the Fusion Fighters United Army.

Later on, while the Fusion Fighters were trapped in the Digital Underworld Beelzemon confronts Laylamon and fights her while trying to protect Mervamon. He managed to apparently defeat her but at the price of receiving a fatal wound from the fight. 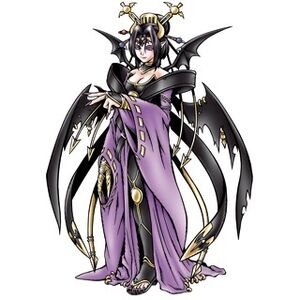 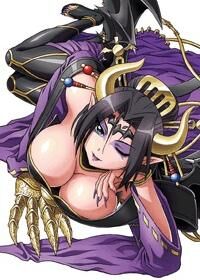 An official Bandai art of Lilithmon from Digimon Collectors. 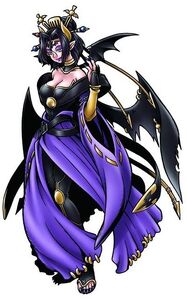 An official Bandai art of Lilithmon in Digimon World Re:Digitize. 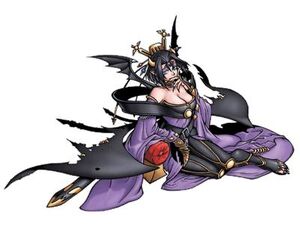 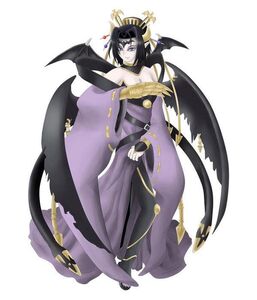 The Goddess of Darkness aka Lilithmon.