High intelligence
Expertise in the law

Weaken and destroy Barry B. Benson's case in order to let the honey companies continue their exploitation of the bees.

Protect the balance of nature (both failed).

Dr. Layton T. Montgomery is the main antagonist of DreamWorks' 15th full-length animated feature film Bee Movie. He is an overweight lawyer who hates insects, namely bees, mostly a talking bee named Barry B. Benson (the protagonist of the film).

He was voiced by John Goodman, who also played Marshall in The Hangover film franchise, Big Dan Teague in O Brother Where Art Thou, Chuck Long in Evan Almighty, Bones Darley in Death Sentence, Howard Stambler in 10 Cloverfield Lane, George Wolfsbottom in Clifford’s Really Big Movie, and Ocious P. Potter in The Borrowers.

When Barry learns that the humans have been stealing and eating his fellow bees' honey for centuries and the bees have been mistreated (mostly by the use of bee smokers) by beekeepers working for companies that are selling their honey, he resolves to sue the entire human race (mostly the CEOs of the companies who has been selling the honey) and put an end to the exploitation of all bees around the world. He is aided by the help of his best friend Adam Flayman and their new human friend Vanessa Bloome, who is a florist and a bee enthusiast herself.

When the day of the trial came, the CEOs of the honey companies hired their best defense attorney, who was none other than Layton himself. For his opening statement, Layton mocks the idea of talking bees in the court, which incited an angry Barry to speak on the behalf of the bees, saying that it would be crazy for the humans just to take the honey away from the bees just because they're the "little guy". As the trial commences, Barry calls in each of the CEOs and several celebrities (such as Sting and Ray Liotta) as witnesses to the stand, where he provides useful evidence against them (such as the exploitation of bears for their imaging products due to their taste for honey) to undermine their case, much to Layton's anger and disappointment.

The next day, Layton is seen reading a book regarding to the behavior of bees, as he plans to weaken Barry's case so that he can file for dismissal. Calling Barry to the stand, Layton questions him about his friendship with Vanessa before calling him an illegitimate bee because of conflicting statements regarding to Barry having parents (who are already in the court) and the queen bee giving birth to all new members of the hive. As Layton continues denouncing the bees, this finally results in Barry's friend Adam furiously flying up and preparing to sting Layton in retaliation. However, Barry soon notices Layton and his clients winking their eyes at each other, realizing that Layton is deliberately planning to get himself stung in order to gain sympathy from the jury. Barry attempts to warn Adam to stop, but he is too late, and after Adam passes out after striking Layton in the butt, Layton starts to yell out in pain (in a more exaggerated manner) before passing out. This puts the bees' credibility at risk, which may result in a chance of dismissal of the case per Layton's motion and let the humans continue their exploitation of bees.

However, taking one last trick up his sleeve, Barry learns of a possibility of presenting a bee smoker to the court as proof of the humans' mistreatment of the bees. After having Adam stall the court for minutes, Barry and Vanessa finally arrive with a bee smoker. Layton scoffs at this by trying to explain that the device can't actually hurt them. But it wasn't the case when he accidentally used the bee smoker on several bees in the courtroom, much to the horror of everyone (including the jury). Realizing what has happened, Layton smiles nervously, seeing that his case is now sunk. With their case now proven, the bees finally win the trial, much to everyone's delight, and the companies are forced to release all bees and return their honey to them. However, Layton angrily warns Barry that this event will result in a bad shift in the balance of nature and that he'll regret this. Layton and his clients then walk away from the court in defeat, upset that they have lost the trial and that they can no longer exploit the bees' honey for their own purposes.

Barry soon learns of what Layton has been implying: the massive stockpile of honey has put every bee out of a job, and without any more pollination, all plant life (including trees and flowers) around the world will die, which will endanger all living organisms (including both humans and bees). To resolve this, Barry uses Vanessa's healthy flowers to re-pollinate all plant life around the world, thus restoring the bees' honey production. The humans negotiate a successful deal with the bees to sell the honey as long as their products are "bee-approved", and Barry happily creates a new law firm to handle disputes between animals and humans.

Layton is a greedy and serious lawyer who hates bees. After he got painfully stung by Adam, he pointed surly at Barry and told him he was gonna regret this. One of his most grotesque plans is when he infrequently weakens and destroys Barry B. Benson's case in order to let the honey companies continue their exploitation of the bees.

Despite his villainous nature, Layton is very pragmatic in general as he makes a good point about the consequences of the disruption of nature when there are no bees to pollinate any more plants due to the massive stockpile of honey being handed over to the bees. 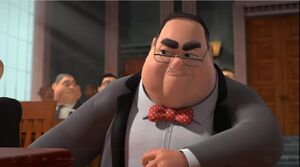 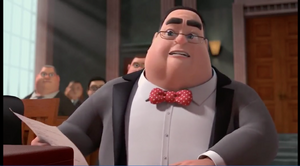 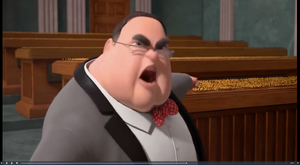 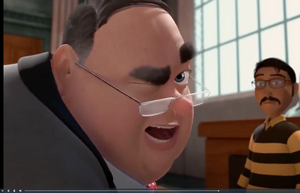 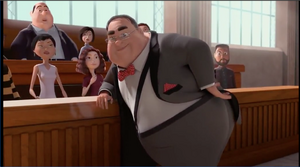 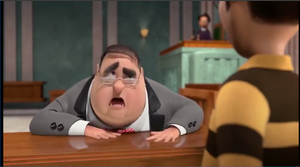 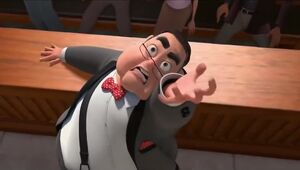 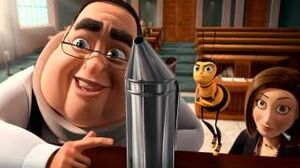 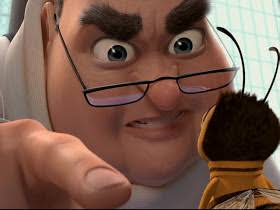 "This is an unholy perversion of the balance of nature, Benson, you'll regret this." 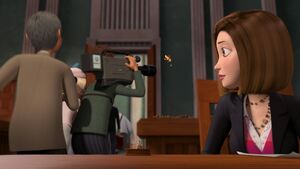 Layton's defeat as he walks away with his clients after losing the trial. 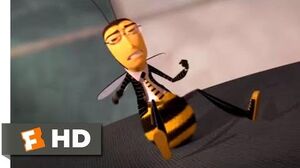 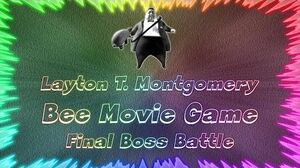