The Deceiver
Matron LeBlanc
The Pale Woman
The Pale Sorceress

Matron of the Black Rose

LeBlanc, also known as The Deceiver, is a villainous playable character in the multiplayer online battle arena game League of Legends.

The mysterious leader of the Black Rose cabal, LeBlanc is a deadly sorceress who has manipulated the history of Noxus since the empire's earliest days. Through illusions and deception, LeBlanc can be anyone or anywhere, and remains an omnipresent background force in Noxus to this day.

The 63rd champion to be added to the game, LeBlanc to be released on November 2, 2010, and is most commonly played in the mid lane.

She is voiced by Carrie Keranen, who also voices Satsuki Kiryūin.

A member of the Black Rose, LeBlanc is a extremely enigmatic figure, with her identity as unknown and strange as her own illusions. Records of her reach all the way back even before Noxus' existence, manipulating those who have power and great wealth to join the Black Rose and with legends of her helping the various tribes defeat the dreaded Mordekaiser. Even as the new empire rose, LeBlanc manipulated the populace to forget of its own dark secrets. With the Black Rose and her power staying in for centuries, her own illusions only cause confusion, as a new matron is said to come into power every generation, causing question if each LeBlanc is the same one. After Boram Darkwill refused to use their advisors, she manipulated Jericho Swain to reveal her conspiracy against Darkwill to be "executed". In truth, she manipulated a paranoid Darkwill to both poison Noxus' status and end Swain's life.

Despite this, Swain did something no one expected by seizing power over Noxus from Darkwill, and Swain wasn't interested in making a legacy nor was easy to manipulate. Through their campaigns, dark magic has circled closer and closer to Noxus, and her actions, no matter the same LeBlanc as centuries ago, twist Runeterra under her command.

Taking the role of a burst-type champion, LeBlanc mainly uses powerful magic to attack her foes. She can create a clone of herself to confuse targets when under 40% health with Mirror Image, fire an orb of magic with Sigil of Malice, dash into foes and create a teleportation post with Distortion, tether a foe with magic using Ethereal Chains, and have a mimic version of her use the last attack she used with Mimic.

LeBlanc is an enigmatic master of deception and illusions, so not much is known about her personal life or her personality. However, from the consequences of her actions it can be assumed that LeBlanc is one of the most intelligent and elusive figures in the lore, whose patience and powers of manipulation are unmatched by others in Noxian politics. Using careful trickery, LeBlanc managed to infiltrate the inner circle of the dreaded dark lord Mordekaiser, taking down his empire from the inside. She trounced her rival Vladimir, forcing him to operate apart from the Black Rose, and despite her failure to kill Jericho Swain before he took power, she manipulated Boram Darkwill for decades before the invasion of Ionia, showing an immense level of proficiency in political maneuvering. No one knows what her plans are yet, but it can be assumed LeBlanc has them all under control. 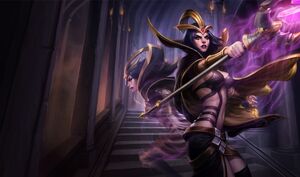 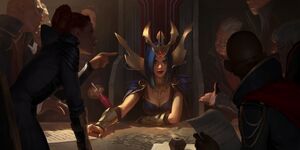 LeBlanc as she appears in Legends of Runeterra. 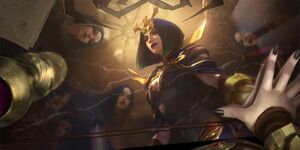 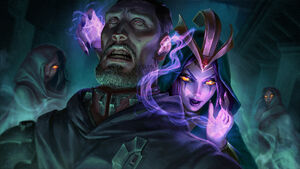 LeBlanc in "Thorns of the Black Rose". 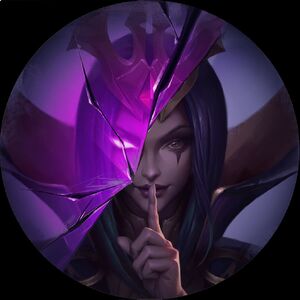 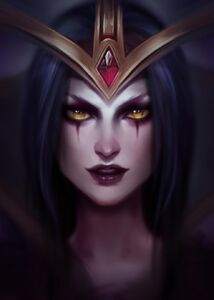 A portrait of LeBlanc. 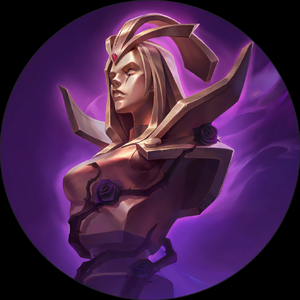 A bust of LeBlanc that appears in Legends of Runeterra. 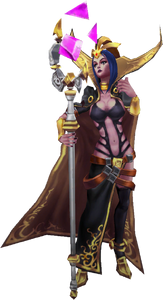 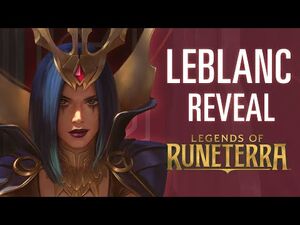