Killing various pirates and adding them to his undead crew/army.

LeChuck is the main antagonist of the entire Monkey Island series and is depicted as an undead pirate with similiar qualities to villains such as Davy Jones and the Flying Dutchman as well as the generic "ghost pirates" of fiction.

LeChuck is an intelligent and powerful villain who frequently uses voodoo magic in his schemes - which are often megalomaniacal in nature. Killing anything and anyone who stands in his way.

LeChuck was a fearsome pirate who fell in love with the beautiful female pirate Elaine Marley. When LeChuck's advances on her were rejected, he decide to find a way to impress her, and soon learns that Elaine's grandfather, Captain H. T. Marley, was planning a voyage to find the legendary treasure of Big Whoop. LeChuck rounds up his own crew and sets sail with intent of discovering Big Whoop first, but soon runs into trouble when his ship got caught in terrible storm which killed all his crew-mates and destroyed his ship.

Many believed LeChuck to be dead, but somehow he survived and landed on Blood Island. When everything seemed hopeless for LeChuck, Captain H. T. Marley arrived at Blood Island with his crew. LeChuck learned from Rum Roger Sr, the first mate on Marley's ship, that they had a map to the legendary treasure of Big Whoop and that the Big Whoop were on Dinky Island. With no ship and money, LeChuck had to seduce a rich women named Minnie Goupsoup to win her heart. At their wedding, LeChuck pried the giant diamond from Minnie's wedding ring and sold it to the smugglers of Skull Island for a new ship. With his new ship he made his way to Dinky Island where the treasure of Big Whoop is said to be buried. After exploring a series of catacombs that lead under the ocean floor, LeChuck discovered that Big Whoop was no ordinary treasure, but the very gates to Hell themselves. LeChuck past through them and his body suddenly dropped dead, leaving him as a undead ghost pirate. Despite his success however, Elaine still rejected him. So LeChuck then made it his eternal life's mission marry Elaine no matter what, and let no one stand in his way.

The Secret of Monkey Island

The game begins with LeChuck having scared many pirates from sailing with his ghost pirate crew. But when pirate-wannabe Guybush Threepwood appears on Melee Island, LeChuck feels he might be a problem to his plans for marrying Elaine. So, taking the form and identity of Melee Island Sheriff Fester Shinetop, he tries to scare away or kill Guybrush. After believing he succeeded, LeChuck kidnaps Elaine and sails off to Monkey Island. But Guybrush survives and rounds up his own crew to sail after him. It is revealed that the only way to kill ghost pirates is by spraying them with root beer made with a voodoo root that LeChuck locked away in his ghost ship. Using some special trinkets, Guybush obtains the voodoo root and turns it into ghost-destroying voodoo root beer. However, LeChuck and his crew have already sailed back to Melee Island for his wedding to Elaine. Eventually, Guybrush confronts LeChuck and it is revealed that Elaine had already escaped. Angered by the turn of events, LeChuck takes his frustration out on Guybrush and after a one-sided fight between the pair, Guybrush sprays LeChuck with root beer that blows the ghost pirate captain to smithereens.

Despite being blown apart, a piece of LeChuck managed to survive which Guybrush keeps as a souvenir of their battle. This souvenir is then stolen by LeChuck's old right-hand man Largo LaGrande who uses it to resurrect LeChuck's body as a zombie. Guybrush finds out and learns that the only way to escape LeChuck forever is by finding the secret of Big Whoop. Unfortunately, Guybrush is eventually captured by the zombie pirate who has planned a painful demise for him. Although Guybrush escapes and makes to Dinky Island's underground catacombs, he again comes face to face with LeChuck who reveals that he is Guybrush's brother. LeChuck then takes out a voodoo doll of Guybrush and starts torturing it, causing the real Guybrush extreme pain. But Guybrush fights back a by making a powerful voodoo doll of LeChuck and tears its leg off, thus tearing off the real LeChuck's leg as well. Dying, LeChuck tells Guybrush to take off his mask so he can see the true face of his brother. Guybrush reluctantly does so and is surprised to find out that underneath the mask it really was his brother, Chuckie. The two pirates then emerge on the surface to find they've become children and are at the Big Whoop Amusement Park. The game ends with both boys walking away with their parents and Chuckie's eyes glowing red toward the screen.

The Curse of Monkey Island

It is revealed that LeChuck had placed a hex on Guybrush and lead him to the Carnival of the Dammed on Monkey Island to be tortured. Guybrush manages to escape while LeChuck wages war on Plunder Island in order to kidnap Elaine Marley again. The undead pirate captain plans to use a voodoo cannonball to blow up the island's fort and turn Elaine into a demon. But Guybrush causes LeChuck to drop the cannonball, blowing up the zombie and sinking his ship. However, LeChuck is still not dead and resurfaces as a flaming demon. LeChuck's skeletal pirate crew eventually capture Guybrush and Elaine and take them both to the Carnival of the Dammed where LeChuck turns Guybrush into a child (again) and tries to take Elaine through the gates of Hell so to make her his undead wife. After turning back to normal, Guybrush confronts LeChuck again and tricks him into setting alight a hand-made explosive which explodes and buries LeChuck under a mountain of ice.

LeChuck returns again after another villain named Ozzie Mandrill pulls the demon from his icy prison. LeChuck destroyed the Carnival of the Damned, becasue the gates to Big Whoop had been sealed and therefore he saw no point in keeping the carnival intact. The pair decide to work together to find a pirate ego-shattering talisman called the Ultimate Insult. LeChuck disguises himself as a politician called Charles L. Charles in order to try and become governor of Melee Island, then use the Island's resources to find the Ultimate Insult and build a giant statue of himself. Eventually, Ozzie obtains a working Ultimate Insult talisman and tries to expose all the pirates in the Caribbean to its ego-destroying effects. But when this plan failed thanks to Guybrush and a giant monkey robot, LeChuck betrays Ozzie and possesses the giant LeChuck statue. In his massive new form, LeChuck tries to squash Guybrush, but is stopped by Ozzie who tried exposing LeChuck to the Ultimate Insult which turned him into an obedient slave. But Guybrush managed to trick LeChuck into squashing Ozzie and destroying the Ultimate Insult talisman, which destroys LeChuck as well.

Years later, in the beginning of Tales of Monkey Island, LeChuck was hypnotiseing the Monkeys of Montevideo to unlock powerful secrets, while keeping Elaine captive. Then Guybrush comes after with the Cursed Cutlass of Kaflu to defeat LeChuck, but the spell went wrong and LeChuck turns human while his Voodoo Pox spreads over the entire Carribean, infecting pirates with his evil. After Guybrush escapes from Flotsam Island, he reunite with LeChuck his finds out that he has become a good guy and wants to help him cure the Pox. But when Guybrush finds the cure: La Esponja Grande and cure the pox, LeChuck murder Guybrush by stabbing him with the Cutlass of Kaflu, just after he had murdered Guybrush's friend Morgan Le Flay, sending them both into the afterlife. LeChuck´s plan was to use La Esponja Grande to absorb immense voodoo energy directly from the Crossroads, making himself into a pirate god. After Guybrush manged to get his body back, he fights LeChuck on his ship. During the battle LeChuck was just standing between the two realms, while Guybrush threw his Shred of Life into the realm which causes it to close. Then LeChuck was destroyed by the power, reducing him to a green fluid of his seemingly indestructible voodoo essence, that Morgan hands over to the Voodoo Lady. What happens to him next is unknown. Yet everyone was convinced that LeChuck was finally gone for good, and Guybrush was finally free of the conflicts between him and LeChuck. 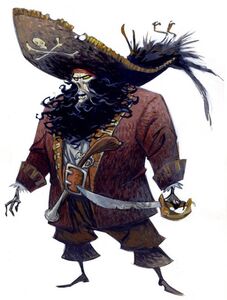 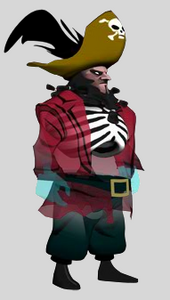 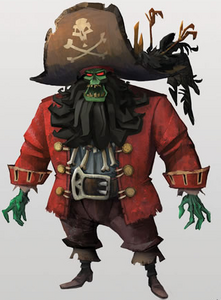 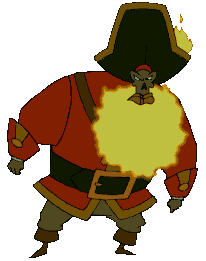 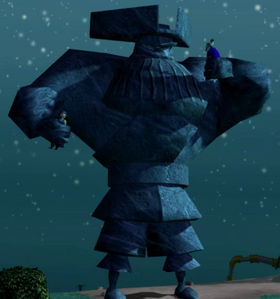 LeChuck as a giant living statue of himself. 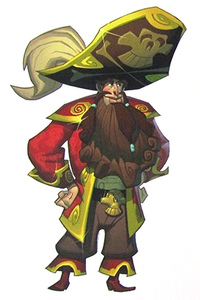 LeChuck as a human. 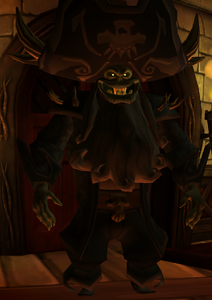 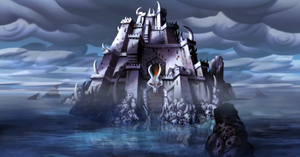 LeChuck's Fortress, the disturbing lair of LeChuck.
Community content is available under CC-BY-SA unless otherwise noted.