Watching Football.
Abusing his son.
Cheating on his wife.

Keep mistreating his son Cleveland to mask his insecurities.

Abusive Parent
LeVar "Freight Train" Brown is a recurring character and occasional villain from The Cleveland Show. He is the father of Cleveland Brown, who he has a history of maltreatment in many ways, most of which would be considered child abuse by today's standards. He's also the husband of Evelyn Brown, who he has a history of cheating on. LeVar can be considered villainous for his child abuse, parental neglect, parental favoritism, and adultery.

Generally, Freight Train keeps a masculine personality, being generally laidback and comic-relief of the show. It is shown that Cleveland isn't the only person he's hard on, as he mocks Holt by stating he "Destroyed yo' mama on a train track" for asking how he got the name 'Freight Train'.

Freight Train’s true self is that of a shallow, narcissistic, and ungrateful bully who masks his own insecurities by projecting them on to his son as he sees Cleveland and the only person he believes beneath him. His constant bullying of his son stems from a desire to feel superior and a refusal to take responsibility for his own choices. Coupled with the hedonistic lifestyle that fuels his ego as well as his multiple affairs that have resulted in numerous children, Freight Train claims he never forgave Cleveland for losing a game show because he became so embarrassed by their loss that he never left his house, believing everyone was looking down on him, and missed out on playing for the Red Skins and losing his job when really it was his own inflated ego that made him lose everything.

LeVar first appeared in "A Brown Thanksgiving", where he cheated on his wife with Auntie Momma. He got his comeuppance when Cleveland told him that "she" was really a trans-gendered he. In "You're the Best Man, Cleveland Brown", LeVar admittedly references to a 500-woman long list of girls he's cheated on Evelyn with. Cleveland couldn't resist adding on "and one guy", reminding him of Auntie Momma.

In "Murray Christmas", it turned out that every Christmas during Cleveland's childhood, LeVar would box with him, in a fight over every one of his presents. Cleveland would always lose and would even have a black eye in most of their pictures. Evelyn did nothing to stop them, as she apparently never even heard of this, when it was happening.

In "When a Freight Train Loves his Cookie", LeVar broke Evelyn's heart, after missing their anniversary, spending it with another girl. Evelyn would be in tears, but would later leave him for George Clinton. LeVar teamed up with Cleveland and the guys, convincing them to help him win her back, which he achieved via musical number "I'm Feelin' Ookie, Cookie". During the number, LeVar would dump a countless number of girlfriends over the phone, including a mother and daughter, all of which he was having sex with, while married to Evelyn. This would be one of the only times, LeVar ever felt guilty and made up for his mistake. 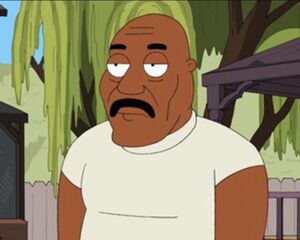 LeVar Brown's cameo in the Family Guy episode, "No Giggity, No Doubt".