The King of Beggars

Kill Arno for his collection (failed).

He was voiced by Ivan Sherry.

Le Roi des Thunes was the illegitimate son of a minor nobleman, who was cast out from home and later rose to his position at the Cour des Miracles district. Le Roi des Thunes also recruited the disgraced tax assessor Aloys La Touche as his lieutenant and tax collector. Around the late 1770s, Le Roi became aware of the existence of the Templar Order and attempted to join it by convincing grand master François De La Serre to let him in, but De La Serre rejected him, telling him that the "king of gutters" would be useless to him.

Le Roi vowed revenge against De La Serre, and the templar conspirator Charles Gabriel Sivert presented him the opportunity to do so. Sivert was secretly participating in a conspiracy against De La Serre, led by the exiled templar Francois-Thomas Germain and his faction of extremist templars. Germain accepted Le Roi and La Touche in the order, and Le Roi des Thunes' first mission was kill De La Serre.

Arno had managed to escape the Bastille with the help of Pierre Bellec, a member of the Assassin Brotherhood. Arno vowed to avenge his adoptive father's death, and managed to locate and assassinate Sivert in the Notre Dame. Through Sivert's memories, Arno learnt of Le Roi des Thunes' involvement in De La Serre's murder. Arno then went to the Cour des Miracles and located Le Roi des Thunes' right hand man, La Touche. La Touche was interrogated by Arno, and locked in his torture room after revealing that Le Roi's headquarters were in the underground sewers.

As Arno made his way to the sewer, he freed the rebelling beggars and caused most of Le Roi's thugs to go up and fight them. La Touche managed to warn Le Roi des Thunes of Arno's presence, and Le Roi ordered La Touche to summon everyone to look for the assassin. Arno made his way to the "throne room", and there he found a decoy sitting in the throne. Le Roi then revealed himself in an upper platform, and tried to shoot Arno. However, Arno managed to climb and stab Le Roi de Thunes to death. Arno then used his eagle vision to see Le Roi's memories, and learned the reason of why he killed De La Serre. 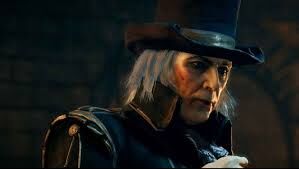 Retrieved from "https://villains.fandom.com/wiki/Le_Roi_des_Thunes?oldid=4254130"
Community content is available under CC-BY-SA unless otherwise noted.