Villains Wiki
Register
Don't have an account?
Sign In
Advertisement
in: Articles under construction, Mature, Family Guy Villains,
and 18 more

The New Yorkers, also known as the "'Leafers", "Leaf Peepers", and "Strap Hangers", are antagonists in Family Guy They are a group of gross, disrespectful, loud-mouthed tourists who annually invade Quahog, Rhode Island once every fall to watch the leaves change colors, making life a living hell for all of the Rhode Islanders around them.

In "Lethal Weapons", The Griffins and The Swansons were having a nice time out by the lake, when the leaves started changing colors and the Leafers immediately came rolling in, ruining their good time. It didn't take long before the town was overpopulated with tens of thousands of obnoxious, brutish, foliage-watching tourists from New York, who planned on staying for a while. The streets were crowded with traffic that made The Griffins late for church. When they finally got there, their original priest's job was taken over by his New Yorker cousin, Father Sapienza, who spoke in a very unprofessional and stupid demeanor. A New York churchgoers got mad that the priest was saying that God was more powerful than him and threatened to attack God. Another New Yorker got mad at him for saying such a blasphemous statement about God and the two got into a brutal fist fight in the middle of church. Peter Griffin tried to break up the fight, but when he said that he'd be watching The Patriots play, when he gets home, one of the New Yorkers got mad at him for supporting the football team he didn't like, he started attacking Peter and got him reeled into the fight, which ruined their trip to the church. Later, Peter and the beer bar buddies went to The Drunken Clam, which was packed with rabblerousing, Jets watching leafers. Peter tried order a beer and tell Horace to put on a Pats game, but Horace told him that all of his remotes and kegs were stolen by leafers and to boot, he'd been shot in the chest by one, causing him to collapse to the ground. Meanwhile, another leafer publicly urinated in the middle of the bar. Peter got sick of the trouble that the Leafers were putting him through and planned on running them out of town by climbing into the tree in his backyard, which a bunch of trespassing tourists were taking pictures of. Peter pretended to be an evil monster tree that ate New Yorkers, but the Leafer watching this saw right through this, got mad, and yanked Peter out of the tree to beat him up. Lois Griffin came out to see her husband get abused by a Leafer and in suit attacked him, scaring him off. Peter was amazed by Lois' fighting skills and used her to his advantage. Peter went around The Drunken Clam and insulted all the Leafers there with jokes about how he plowed their moms, how they ran like homosexuals, and how their sports teams all sucked, just to annoy him but whenever they tried to attack him, Lois would beat them all up and eventually run them all out of the bar. 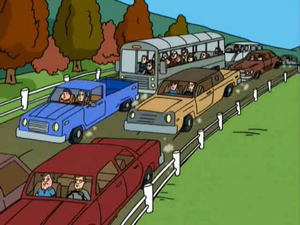 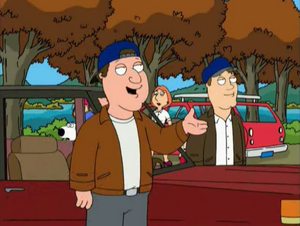 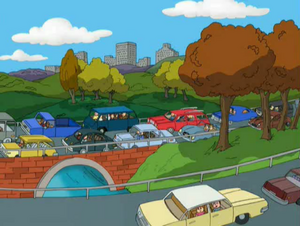 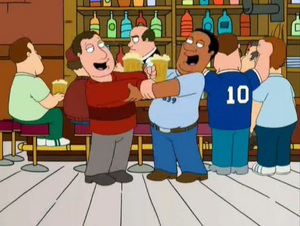 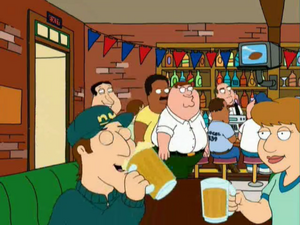 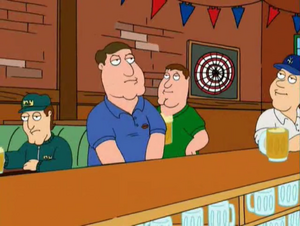 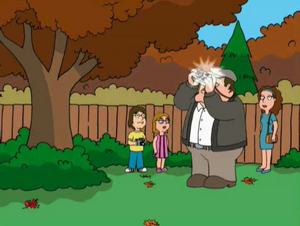 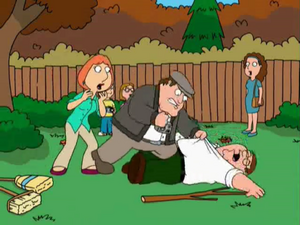