The League of Assassins was founded by Ra's al Ghul. The time which however is unknown. It was created to be "the fang that protects the head". Some of the most dangerous assassins in the DC universe such as Lady Shiva, David Cain, and master archer Merlyn have all been members of the League of Assassins.

Doctor Darrk aka Ebeneezer Darrk, was the first known individual assigned by Ra's al Ghul to head the League of Assassins and seconded by the martial arts master The Sensei from Hong Kong. Darrk relied upon careful planning and manipulation, ambushes and death traps, concealed weapons and poisons, and the League at this time reflected his personal methods, but for many years the League has been filled with some of the greatest martial artist in the DCU. Ra's was never revealed as the leader of the League until Ra's and Darrk had a falling out and Darrk kidnapped Ra's' daughter, Talia Al Ghul, and Ra's kidnapped Robin so that Batman would help him in finding his daughter. Darrk died while trying to kill Batman and Talia.

The Sensei became the second leader of the League using many of Darrk's tactics, but lead the group in a more brutal way. The operative known as the Hook was assigned to murder Boston Brand who became Deadman after his death. Professor Ojo was able to brainwash Ben Turner into becoming the Bronze Tiger. Bronze Tiger was able to defeat Batman, but due to his training from O-Sensei he didn't kill him and he left the team. Sensei would later go insane and wanted to raise assassination to an art and attempted to cause an artificial earthquake in order to kill a number of diplomats gathered for peace talks.

Batman traced Ben Turner to a hospital, foiling a League attempt to assassinate the man. Turner could not fully remember the actions of his alternate personality but he was able to aid Batman in uncovering the Sensei's latest plot. Although Batman was unable to prevent the earthquake, ultimately it was only the Sensei himself that died in the disaster, and control of the League returned to Ra's.Ra's had grown tired of disloyal servants and ordered David Cain to create a perfect bodyguard ("The One Who Is All"). After trying to raise such a person resulted in hopelessly psychotic children, Cain decided that he needed a genetically suited child and began searching for a possible mother.

To this end he assassinated Carolyn Woosan/Wu-San, one of two astonishingly talented martial artist sisters Carolyn's sister, Sandra, swore revenge and tracked Cain down, only to be subdued by the combined might of the League. However, she was frightened by the levels of skill she was attaining now that she was no longer held back due to her sister; Sandra agreed to be the mother of Cain's child in return, the League spared Sandra's life, and assisted her in further training. By the time Sandra gave birth, she had surpassed the entire League in skill and left immediately following the birth of her daughter, Cassandra Cain, renamed herself Lady Shiva. The League attempted to train Cassandra from birth to be the ultimate assassin, unknowingly giving her the skills she would use as the hero Batgirl.

After the death of Ra's, his first born daughter Nyssa Raatko formed a new League. Lady Shiva was recruited to serve as Sensei to this incarnation of the League with the intent that Cassandra would lead the warriors themselves.Reflecting Shiva's emphasis for martial arts, the known members of Nyssa's League were all skilled in this area, and included the warriors Shrike, Kitty Kumbata, Wam-Wam, Joey N'Bobo, Tigris, Momotado, Krunk, White Willow, the twin warriors Los Gemelos, Ox, "The Mad Dog", Alpha, and Cristos. The new League was present when Mr. Freeze's wife Nora Fries was brought back to life as the monstrous Lazara, and several members died in the resulting chaos.

Due to the conflict between their loyalty to Shiva and Nyssa and their near-worship of Batgirl as "The One Who is All", the League split at that point, with Ox, White Willow, and Tigris pledging themselves to Cassandra. Several more members of the League (including all the defectors except Tigris) died when the insane "Mad Dog" went on a killing spree. "The Mad Dog", it was revealed, had been one of David Cain's early attempts to create Ra's' perfect warrior. The Mad Dog had been considered useless as a child, since Cain's methods had driven him murderously insane, and Ra's had ordered the child be killed. Nyssa, however, knew that the servant ordered to carry out this execution had instead released him into the wild, explaining how it was possible to recruit him. The Mad Dog was successful in killing Batgirl (who gave her life to protect the burqa-clad assassin Tigris). She was quickly restored to life in a Lazarus Pit by Shiva, in order that the two could face each other in a final battle. 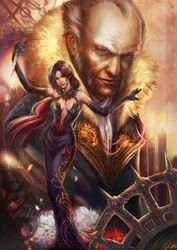 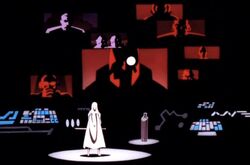 The League of Shadows
Add a photo to this gallery

Retrieved from "https://villains.fandom.com/wiki/League_of_Assassins?oldid=2417720"
Community content is available under CC-BY-SA unless otherwise noted.