Get revenge for their defeats

The founders of E.V.I.L. first met in Madame Lazul's hut, with Hagatha the Witch, Dr. Boom and King Togwaggle being called to meet up. It is revealed that Rafaam was the one who organized the invitations, who promised the other villains that they would get revenge on the heroes who defeated them. Their first plot was to take over the floating city of Dalaran in their own ways: Togwaggle robbed the city's bank, Hagatha broke into Violet Hold to enslave its prisoners, Lazul took over the city's marketing business, Boom attached rockets to make the city steerable and Rafaam defeated the Kirin Tor mages in order for the League of E.V.I.L. to have full control over the city. With the help of their lieutenants (each representing one of the series' nine classes), they succeeded in their mission and became another of Azeroth's most powerful threats.

After taking over Dalaran, E.V.I.L. sets out to the desert region of Uldum, unleashing a swarm of locusts to terrorize the inhabitants and releasing the sealed Plague Lords to cause havoc. The League of Explorers fight the Plague Lords and some of the League's lieutenants before confronting the final boss Tekahn, who summons all four of the Old Gods into Uldum. Unfortunately for Tekahn, Rafaam betrays him and leaves his fate to the Explorers.

The League of E.V.I.L. heads off to conquer the dragons' home of Dragonblight, with each of its leaders resurrecting the proto-dragon Galakrond from death using each of their own methods. When the League of Explorers arrives to stop them, Dr. Boom kidnaps Reno Jackson using his airship, but Brann Bronzebeard rescues him. Afterwards, a battle ensues between the Explorers' allies and the League of E.V.I.L., fighting over the fate of Azeroth as they know it.

The Galakrond's Awakening adventure covers the final clash between League of Explorers and League of E.V.I.L., with two sides of the adventure told from each side's perspective. In the E.V.I.L. wing, they defeat the Explorers' forces and progress smoothly until Captain Eudora's airship, the Slipstream, gets attacked by dragons. Rafaam and the League abandon her in order to pursue their greater goal, leaving Eudora disappointed and talking about joining another evil league. Rafaam resurrects Galakrond (who appears as his Wretched form) and battles Reno on the giant dragon's back.

In the League of Explorers' route, Reno transforms into his true form Renogos and defeats Rafaam and Galakrond. In the League of E.V.I.L.'s route, Rafaam defeats Reno and the combined forces of the Alliance and Horde, but Galakrond rebels against him and decides to destroy Azeroth. Rafaam feels that his goal was hollow since if Galakrond destroys the world, he will have no world to conquer, so he decides to defeat Galakrond himself. 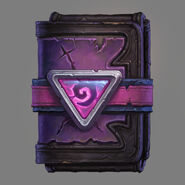 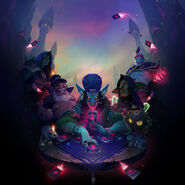 Rafaam assembles the League of E.V.I.L.

Rafaam explaining his E.V.I.L. plan to the League.

The League of E.V.I.L. discusses their plan during their descent.