Helping the Precursors with their goals.

Help the Precursors colonize the world (both failed).

Leatherback is a massive Kaiju and a major antagonist in the 2013 film Pacific Rim. Leatherback is designated a Category IV Kaiju because of its size, strength, and high toxicity levels. Leatherback and its Kaiju bretheren, Otachi, are sent through the breach by the Precursors, in order to track down and assassinate human scientist, Newton Geizsler, after he learns the details of the Kaiju's origins.

Its vocal sound effects were provided by Scott Martin Gershin.

True to its name, Leatherback resembles a massive turtle-like creature with some gorilla-like features. It posessess fourteen bioluminescent tendrils on the back of its head that wiggle as a sign of agitation. Leatherback's fists are akin to that of maces, the hard protrusions that cover its hands and body can tear through armor. Its thick skin allows it to withstand great amounts of damage without falter. This is further enhanced by heavy armor on the shoulders, as well as a rather notable crest-like plate that covers the top of its head.

Leatherback does not possess the same level of intelligence as Otachi and mostly relies upon its sheer brute force and animalistic rage. It has a large organ on its back which allows it to naturally charge and generate an electromagnetic pulse which disables all electronics in a wide surrounding area, a dangerous threat to digitized Jaegers, which is arguably the creature's most dangerous weapon.

Leatherback first appears after coming through the breach and attacking Cherno Alpha as the giant mech battles Otachi. The creature easily destroys Cherno with its brute strength by smashing the control center with its fists and killing the crew inside.

After dealing with Cherno Alpha, Leatherback fires its EMP weapon at the other Jaeger that is now battling Otachi, Striker Eureka. The EMP blast shuts down all of Striker's systems leaving it completely powerless and allowing Otachi to head into the city of Hong Kong. Leatherback then begins to circle and seemingly taunts the helpless crew of Striker Eureka, before one of the pilots, Herc Hanson, fires a flare into one of the creature's eyes in a last ditch effort to keep it from reaching Hong Kong. Before an enraged Leatherback can deliver the final death strike to Striker, fellow Jaeger, Gipsy Danger arrives and halts Leatherback's attack, saving Striker and its pilots.

Enraged (likely because Precursors, who presumably sees Gipsy Danger via drift with Leatherback shocked with Jaeger's return), the massive Kaiju starts off the battle against Gipsy with the upper hand, using its size and strength to keep the mech off balance. Eventually Leatherback picks Gipsy up in the air and violently launches it into the docks of Hong Kong. Leatherback then charges Gipsy of a second attack, but Gipsy's pilots, Raleigh and Mako, are able to adapt to Leatherback's brutal style and begin to gain the upper hand. Gipsy using a massive crane and several cargo containers, viciously beats the Kaiju down. Leatherback, enraged by the beating, once again charges Gipsy and attempts to push the Jaeger back into the ocean in order to destroy it the same way it had Cherno Alpha earlier. Raleigh, noticing the tactic, charges Gipsy's plasmacaster and empties an entire clip into Leatherback's chest and side which results in the beast losing an arm and eventually falling down dead. Raleigh, wanting to be sure of the creature's death, "checks for a pulse" by releasing another barrage of cannon fire which almost completely obliterates Leatherback's remains.

Its demise presumably enraged the precursors, as they immediately proceed to hasten and deploy an even more stronger and cunning Kaiju to finish what they started. 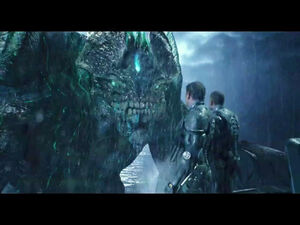 Leatherback, staring down the pilots of the disabled Jaeger Striker Eureka. 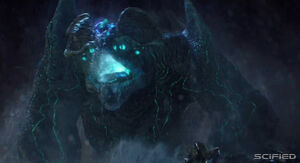 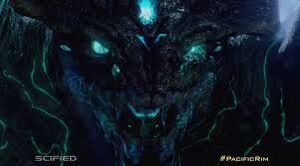 A close-up of Leatherback's six eyes. 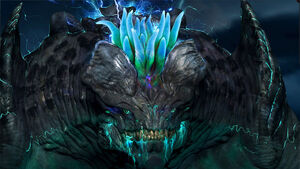 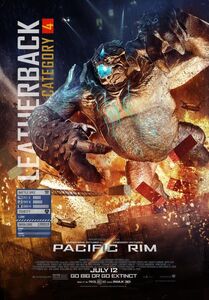 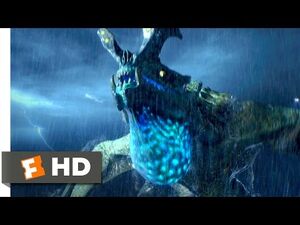 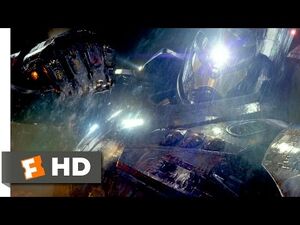