Making masks out of his victims' skinned faces.

Protect Elizabeth at all costs (abandoned).

Jedidiah Sawyer, more famously known as Leatherface, is the main antagonist of The Texas Chainsaw Massacre while also serving as the anti-heroic deuteragonist of it's sequel Texas Chainsaw 3D and the titular main protagonist of the 2017 prequel Leatherface. Unlike his previous incarnations, the 3D version of Leatherface becomes a tragic anti-hero.

He was portrayed by the late Gunnar Hansen in The Texas Chainsaw Massacre, Dan Yeager in Texas Chainsaw 3D and by Boris Kabakchief (as a child) and Sam Strike in Leatherface.

Jedidiah Sawyer was born into the cannibalistic Sawyer Family during the late 1940's and was raised to become an equally sadistic butcher as his family since he was a child.

In 1955, couple Betty Hartman and Ted Hardesty are driving down a country road when they come across the seemingly wounded child Jedidiah Sawyer. In an attempt to help him, Betty follows him to a dilapidated barn, where she is promptly killed by his murderous and sadistic family. Her father, Sheriff Hartman, is called to the crime scene, where he is shocked to find his daughter deceased. Despite the efforts of matriarch Verna Sawyer, Hartman responds by taking Jedidiah into custody as retribution against the Sawyers, sending him to a mental institution known as the Gorman House Youth Reformery for the next 10 years.

In 1965, Jedidiah now known as Jackson bonds and falls in love with a beautiful nurse named Lizzy soon escaped with several other patients from the institution, kidnapping Lizzy in the process. During his years in the Institution he became a friend of Bud, they were best friends until he dies on the run. When Jed is trying to escape from Hal Hartman he shoots him to his face, destroying part of his mouth leaving him with the inability to talk. When Hartman puts Jed in the same hole where his daughter died, Verna and her family track him to the place, saving Jed.

When Jed is finally home Verna tries to sew Jed's mouth, using a harness to keep his face together but this leaves him deformed. When Hal Hartman is tied on Jed's house he takes the chainsaw and finally kills Hartman. Lizzy escapes from Jed's house, when Jed caught her she told him that his mother is crazy, immediately Jed cuts her head with the chainsaw in mindless rage. Later, Jed becomes Leatherface, using Lizzy's face as his first mask, showing remorse for killing the only one person who was ever nice to him.

Ever since, he would gradually lose his sanity and became submissive due to the abuse and control over him by his family.

Leatherface is first seen catching Kirk off guard after he trespasses into the Sawyer Home, knocking him down with a hammer before beating him to near-death. When Kirk's girlfriend Pam goes inside to look for him, Leatherface catches her and painfully hooks her on a hook like meat as she helplessly watches him disembowl Kirk with a chainsaw while hanging before getting stuffed into an ice-box alive. Pam's friend Jerry heads out to look for her and Kirk at sunset. He sees the house and finds Pam, still alive, inside a freezer. Before he can react, Leatherface kills him.

With darkness falling, Sally and Franklin set out to find their friends. As they near the neighboring house and call out, Leatherface lunges from the darkness and kills Franklin with a chainsaw. Sally runs toward the house, and finds the desiccated remains of an elderly couple upstairs. She escapes from Leatherface by jumping through a second-floor window, and flees to the gas station. The proprietor calms her with offers of help, but then ties her up, gags her, and forces her into his truck. He drives to the house, arriving at the same time as the hitchhiker, now revealed as Leatherface's brother. The hitchhiker recognizes Sally, and taunts her.

The men torment the bound and gagged Sally while Leatherface, now dressed as a woman, serves dinner. Leatherface and the hitchhiker bring down one of the desiccated bodies from upstairs, that of their Grandpa. He is revealed to be alive when he sucks blood from a cut on Sally's finger. They decide that Grandpa, the best killer in the old slaughterhouse, should kill Sally. He tries to hit her with a hammer, but he is too weak. In the ensuing struggle, she breaks free, leaps through a window, and flees to the road. Leatherface and the hitchhiker give chase, but the latter is run over and killed by a passing truck. Leatherface attacks the truck with his chainsaw, and when the driver stops to help he knocks Leatherface down with a pipe wrench, causing the chainsaw to cut his leg. The driver flees, and Sally escapes in the back of a passing pickup truck as Leatherface maniacally flails his chainsaw in the air in anger and defeat.

Following the events of The Texas Chainsaw Massacre, the town sheriff arrives at the Sawyer house demanding for Leatherface to surrender. The family initially refuses, but eventually comply. The people of Newt, Texas, led by Mayor Burt Hartman, then arrive and burn down the farmhouse of the murderous Sawyer clan in an act of vigilante justice. The arsonists are proclaimed heroes of the community, and the entire Sawyer family is killed. However, an infant with a burn mark on her chest, is found by one of the townsmen, Gavin Miller, who promptly murders her dying mother, Loretta Sawyer. Gavin and his wife Arlene take the child into their care and raise her as their own daughter.

In the future, Heather Miller receives a letter informing her that her grandmother, Verna Carson, has passed away, much to her surprise. When she confronts her parents about it, she discovers that she was adopted from a family in Newt, Texas. Heather, her boyfriend Ryan, her best friend Nikki, and Nikki's boyfriend Kenny travel to her grandmother's home to collect her inheritance. Along the way, the group picks up a hitchhiker named Darryl. Upon arriving, Heather is given a letter from Verna's lawyer that she neglects to read. As the group explores the house, they decide to stay the night. Heather and her friends leave to buy food and supplies, leaving Darryl behind to look after the house. Darryl begins stealing valuables and discovers a metal door in the wine cellar that he is unable to open; as he tries to enter he is killed by Leatherface.

While grocery shopping, it is revealed that Nikki and Ryan have slept together. Heather meets Deputy Carl and Mayor Burt Hartman. Heather and her friends return to find the house ransacked. While Kenny is preparing dinner, he goes downstairs to the cellar where Leatherface impales him on a hook. Nikki tricks Ryan into going outside to the barn, then seduces him. Heather finds her grandmother's decomposing body upstairs and is attacked by Leatherface in the kitchen, but she manages to escape while he kills Kenny with a chainsaw. Heather runs to the graveyard outside the house and hides in a coffin which Leatherface saws through. Nikki and Ryan draw the attention of Leatherface, while Heather gets in the van and picks up her friends. Using his chainsaw, Leatherface cuts through one of the tires, which causes the van to crash, killing Ryan on impact. After wounding Nikki, he then chases Heather to a nearby carnival, where Deputy Carl is patrolling the grounds.

While at the police department, Heather begins digging through the files on the Sawyer family, and learns of the family's murderous history and how they were killed. The sheriff and Hartman send an officer to investigate the Carson estate. Over the phone, the officer reports his findings. He finds Nikki hiding in a freezer but accidentally shoots her in the head before he himself is killed by Leatherface. Leatherface skins the flesh from the officer's cadaver and uses it to create a new flesh mask.

Enraged by the officer's findings, Hartman vows to end the remaining Sawyers. Heather leaves the station and meets with her lawyer at a bar. He tells her that Leatherface is her cousin, who survived the burning of the farmhouse. Heather escapes the bar when Hartman finds her and runs into Deputy Carl in his patrol car. As they drive away, Carl reveals himself as Burt's son. He kidnaps her and takes her to the Sawyer family's old slaughterhouse, ties her up and gags her. Listening over the deceased officer's police radio, Leatherface learns of Heather's location and goes to the slaughterhouse to kill her. Before he is able to do so, he sees a Sawyer sygil birth mark on Heather's chest and removes her gag. Heather tells him that she is his long lost cousin and he releases her. Leatherface is then attacked from behind by Hartman and his friend Ollie. Heather takes the opportunity to escape. As Hartman and Ollie prepare to kill Leatherface by throwing him into a meat grinder, Heather returns having had a change of heart, kills Ollie, and tosses Leatherface his chainsaw. In the struggle, the sheriff arrives but hesitates to stop Leatherface from killing Burt. Leatherface uses his chainsaw to force Hartman to his death in a meat grinder. The sheriff lets Heather and Leatherface go. Afterwards, Leatherface and Heather return to the Carson Estate, where Heather reads the letter from Verna. It informs her that her real name is Edith Rose Sawyer, that Leatherface lives in the basement behind the metal door and that he will protect her for the rest of his life, but it also requests that she take care of him in return. Leatherface finally buries Verna's body. Heather accepts how Leatherface's mental state drove him to commit his crimes and graciously accepts him as her only family.

In a post-credits scene, Heather's adopted parents show up at the Carson estate to visit Heather, intending on greedily splitting her assets. As they wait in front of the door, Leatherface comes through the door with his chainsaw in hand.

As a child, Jedidiah was innocent however, he was manipulated and abused to do his family's dirty work such as luring unsuspecting people into The Sawyer compound to be subdued and eventually killed and eaten by the family. As a young adult however, he appears as a shy and protective young man as he protected the nurse Lizzy from his fellow inmates as he has fallen in love with her. However, all it takes is for his mother to manipulate him into being a mindless killer, and he becomes one after being controlled by her which leads to him killing Lizzy. However, Jedidiah still felt remorse for killing Lizzy and sew a mask out of her face, this experience would contribute in him losing his sanity which leads him to become a feral, incoherent monster.

During the present day, with his family gone, Jedidiah now known as Leatherface became rather stoic and brutish in nature compared to himself in 1974 where he was child-like and submissive, he also developed a bloodlust for his victims and became intimidating in nature. Despite being a ruthless killer, he managed to bond with his long lost cousin Heather after finding her and is currently being looked after by her.

Jedidiah seconds before getting shot in the face. 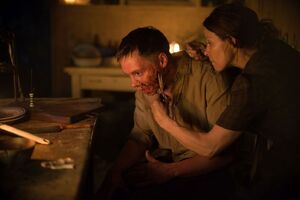 Jedidiah getting his face sewn by his mother. 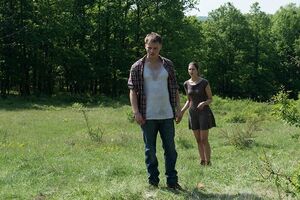 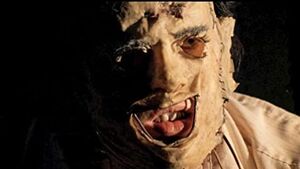 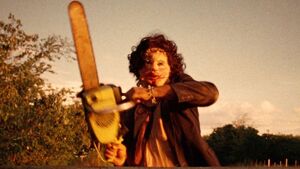 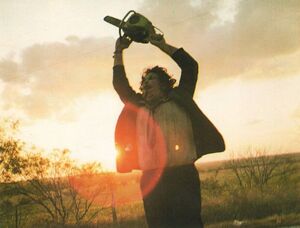 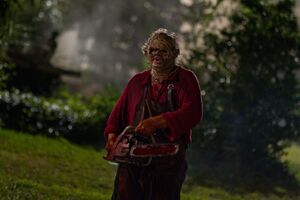 Leatherface and his cousin, Heather.