Killing people for meat and eating them with his family (formerly).

Hanging around the Harlow Orphanage.

Avenge Ginny for her death (succeeded).

Wrathful Serial Killer
Kenny Slaughter, also known as Leatherface, is the main antagonist in the 2022 horror film Texas Chainsaw Massacre, which serves as a direct sequel to the original 1974 film The Texas Chain Saw Massacre.

He is portrayed by Mark Burnham.

On August 18th, 1973, five college students, Sally, Franklin, Jerry, Pam, and Kirk went on a road trip to go to their homestead as they have heard reports of grave robbings. Kirk and Pam looked for the local swimming hole and stumbled upon the cannibals' house—hoping they could get some gasoline for their van—where Leatherface killed Kirk with a sledgehammer and hung Pam on a meat hook before throwing her into a freezer where she froze to death.

When Jerry came looking for them, he was killed by Leatherface with a sledgehammer. He then killed Franklin in the woods with his chainsaw and chased Sally, where The Cook took her to his house to cook her and eat her. When Grandpa failed to kill Sally with the hammer, she ran, but the Hitchhiker and Leatherface chased after her. Hitchhiker was much faster then Leatherface and caught up to Sally.

Before he could kill her, he was run over by an 18-wheeler and had been too focused on Sally to notice. With the Hitchhiker dead, only Leatherface was left and managed to catch up to Sally. Sally went in the truck and with the driver and he attacked with his chainsaw. The two got out and ran as Leatherface chased after them. Seeing that they weren't losing him, the driver with a wrench, knocking him down and causing him to cut his leg on his chainsaw. Sally managed to take advantage of this distraction and escape on a passing pickup truck while the driver ran away in fear. He was last seen swinging his chainsaw around in frustration due to his victim escaping, his wounds bleeding, and his brother dead.

Soon after, Leatherface ran away from home and threw away his skin masks, arriving to the small town of Harlow. He went to an orphanage and was met by Virginia "Ginny" McCumber, who took him under her wing. For fifty years, Leatherface would live a quiet and peaceful life.

Fifty years after the original massacre in 1973, a group of entrepreneurs, Melody, Lila, Dante, and Ruth, have travelled to their quiet homes however after having bought most of the properties from the banks that own them with the hopes of creating their own community after selling the buildings in an auction. After noticing one of the buildings waving a confederate flag, the group discover Ginny who regretfully inform her that she has to leave since she apparently no longer owns the building and after two police officers arrive to escort her out, Ginny suffers a heart attack. Ruth and Leatherface join the officers in their van as they drive to the nearest hospital, but Ginny dies on the way there, enraging Leatherface and he kills one of the officers.

After forcing the van to crash, Leatherface kills the remaining officer and Ruth, then makes his first new mask in half a century from Ginny's face. Leatherface then makes his way back to Harlow to enact his revenge on those who he believes murdered his last living blood relative. Meanwhile, Melody finally receives the text message from the already dead Ruth that "the old lady" had died and feeling remorseful for their actions, Melody plans on leaving Harlow with her sister Lila. Richter, the only other person who was living in Harlow, hears what happened however and takes their keys to their bus and refuses to give them back until they can prove they had the right to kick Ginny out of her home.

Sally Hardesty, the only living survivor from the original massacre, is told by a friend of hers that he heard over the radio about a man who forced a van to crash and made a mask from someone's face. Realizing it's the same man who killed her brother and three of her friends, Sally gears up to get her revenge on Leatherface. After finally arriving back in town, Leatherface enters his home and attacks Dante with a meat cleaver just as Melody discovers Ginny actually still had the deed to her home and they had no right to evict her.

It begins to rain over the town of Harlow, forcing almost all of the auctioneers onto the bus, but Richter discovers a wounded Dante stumbling down the sidewalk who then bleeds to death. Richter goes into Leatherface's home to investigate where he finds Melody hiding under the bed who warns Richter that Leatherface is hiding behind the door. Richter manages to put up a decent fight for a while, but Leatherface still manages to kill him. After he leaves, Melody takes the keys from Richter's body and escapes outside where she reunites with Lila on the bus and tries to warn her about what's going on. It's too late however since Leatherface walks onto the bus where he massacres everyone inside with his chainsaw.

Melody and Lila escape out of the bathroom window where they're met by Sally who locks them both inside of her car before confronting Leatherface. Oddly, Leatherface doesn't initially remember Sally and completely ignores her even though she has invaded his own with a shotgun pointed at his face and goes back outside to kill Melody and Lila, but is then shot by Sally who laughs maniacally the same way during her escape fifty years ago, reminding Leatherface of who she is. Sally gives Melody and Lila the keys to her car so that they can drive away, but is ambushed by Leatherface who impales her with his chainsaw. Before she dies, Sally tells Lila that if she doesn't kill him, he'll haunt her and her sister for the rest of her days.

Lila rejoins Melody in Sally's car and they attempt to run over Leatherface, but they accidentally crash it and Melody is impaled by a piece of metal. Lila takes Sally's shotgun and follows Leatherface into an abandoned movie theater who ambushes her as well and nearly kills her until she's saved by Melody and shoots Leatherface several times with the shotgun before slicing the chainsaw up the his chin to uppercut him with it, and Leatherface falls back into an indoor body of water where he presumably drowns.

A few hours later, Melody and Lila are finally about to leave Harlow when Leatherface suddenly reveals himself once again to be alive and decapitates Melody. Lila screams in anguish as her self-driving car takes her away while Leatherface dances on the road with his chainsaw and Melody's severed head. Sometime later, Leatherface returns to his original home. 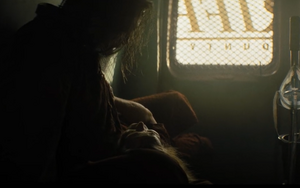 Leatherface comforts Ginny as she dies. 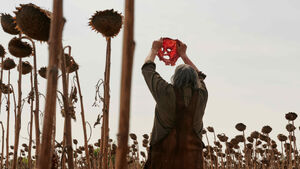 Leatherface's first human skin mask after fifty years, made from the face of his grandmother. 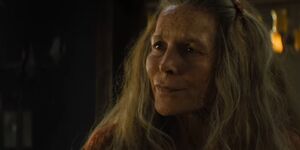 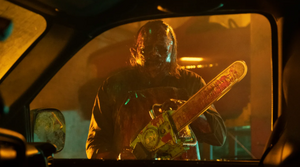 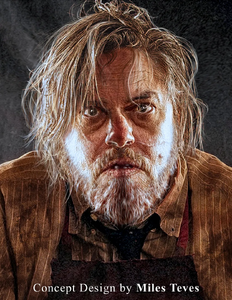 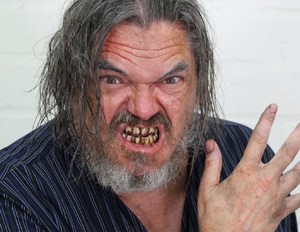 Mark Burnham in the Leatherface makeup, with fake dentures.