To frame Ig Perrish for the murder of Merrin Williams and cover his own tracks (failed).

Lee Tourneau is the main antagonist of the 2010 dark fantasy novel Horns and the 2013 dark fantasy comedy thriller movie adaption of the same name.

He is a local young lawyer in the small American town of Gideon, New Hampshire, and the murderer of Ig Perrish's childhood sweetheart Merrin Williams. He then tries to frame Ig Perrish for Merrin's murder to save himself.

Lee was a sociopathic child who hated his drug addict mother. At one point in his childhood, he attempted to feed and befriend a stray cat, only to be swatted at, causing him to fall from a fence ; impaling his head by the spike of a pitchfork and is severely brain damaged; he then undergoes a hallucination in which he perceives things as God would, and kills the cat. When he returns, his mother perceives nothing wrong, not even investigating the cause of his injury but rather only reprimanding him for his blood stained pillow cases. It appears that from this point in time, his personality is changed and he has psychopathic thoughts.

During his childhood, Lee was in a relationship with a girl named Glenna and was making friends with Merrin Williams and Ignatius "Ig" Perrish when Ig was saved by Lee from drowning. In actuality, Lee had kicked Ig by accident when he was trying to get away from the snake that actually did save Ig's life. Ig woke up and was under the impression that Lee was patting his back after having saved him. Lee had a criminal record - stealing and robbery as teenager. When Lee fixed Merrin's cross she had left behind, Ig traded the cross for a cherry bomb considering he wanted to give it to her himself. Lee accepts his offer, but when he uses the bomb to explode in a car, it doesn't go off for a while, so Lee walks over to it too closely before it blows up one if it's windows, causing a piece of glass to shatter and scar Lee in one of his eyes, damaging his vision.

As years passed and Lee is now 26 years old, he has become adviser and aide to a Congressman who is part of the Conservative Christian. His mother has become inflicted with dementia, and so he takes advantage of her weakened state and tortures her to death in order to get closer to Merrin and hopefully have sex with her. Merrin does come closer to him, but as they start to spend more time together, Lee begins to perceive certain "signals" from Merrin that he believes are implications that she wants to break up with Ig and be with him. He officially thinks he's won her over once she tells him she is going to break up with Ig because she's "learned some things about herself".

Unbeknownst to Lee, she is suffering from a type of cancer her sister had suffered from and wants to break it off with Ig so that he doesn't have to watch her die once they get married and suffer. On the night she broke up with Ig, Lee and Terry pick her up and attempt to drive her over to his house, but she asks them to stop by the tree house she and Ig used to hang out in. Lee offers her some clothes of his to keep her warm in the rain, and she accepts them before leaving to go to the tree house. After waiting a while, Terry passes out and Lee meets with Merrin at the tree house in an attempt to make love with her. She rejects him and states the "signals" she had been sending him were never signals to begin with. Enraged by this, he strangles her with the tie he gave her, and then rapes and kills her via bashing her in the head with a rock. He then blackmails Terry into helping him cover up her murder by threatening to frame him and Ig for the murder and Terry regretfully agrees to do so.

Ig was determined to find out who murdered her because of his newfound supernatural powers due to his horns.

When Ig found out Lee had killed her due to Terry confessing under the horns' influence, he had finally tracked Lee down, and attempted to make him do the same. Unfortunately, Lee does not give in due to Merrin's cross being around his neck, which is what shields him from the horns' influence. After Ig leaves, Lee has his childhood friend, Eric Hannity, track Ig down to kill him, but Ig had managed to escape. However, Lee manages to track Ig down to the foundry, and bludgeons him in his sleep. Ig wakes up and is nearly crippled by Lee. Ig manages to tear Merrin's cross off of Lee's neck, and Lee confesses that he never actually saved Ig, as well as his desire to rape a 14 year old girl that lives next door to him. After Lee is done beating him, he puts Ig inside his AMC Gremline, doses it with gasoline and sets it on fire. Ig is able to release the parking brake, and the car, ablaze, rolls down into the river. The fire, though reddening Ig's skin, has somehow completely restored him to physical health, healing the damage from his fight.

Ig eventually reunites with a childhood friend of his, Glenna, whom he convinces to lead a more fulfilling life, and when she accidentally leaves her cell phone, Ig uses it to call Lee and, mimicking Glenna's voice, persuades him to drive to the foundry, where Ig hopes to ambush and kill him. Terry unexpectedly arrives at the foundry, confessing that he has quit his TV job, though Ig begs that he flee. Lee's car arrives, and both Lee and Eric exit the vehicle, armed with guns and aware of Ig's trap, having talked to the real Glenna. Ig and Eric struggle for a time before Lee shoots and kills Eric, hoping that it will look as though Ig and Eric killed each other, without Lee's involvement. Lee then beats Ig with the empty shotgun until Terry reappears, blasting his trumpet into Lee's ear. With this distraction, Ig finally slams his horns into Lee's body. He then telepathically convinces a snake to slide down Lee's throat, killing him.

As result of being neglected by his drug addict mother and later suffering an accident with a stray cat that led to the brain damage, Lee became quite the sociopath. He loathed his mother for her neglect, and later killed her once she was dying from dementia. His rough childhood also turned him into a juvenile delinquent, having stolen and sold various items presumably as a way of venting his seemingly groundless hatred of his mother.

He was also a remarkable master manipulator in spite of having such psychopathic tendencies, as proven when he uses his mother's death as ruse for getting closer with Merrin, and in how he was able to cover his tracks by framing Ig.

Within the 2013 film adaption, Lee is presented with various differences from his novel counterpart: 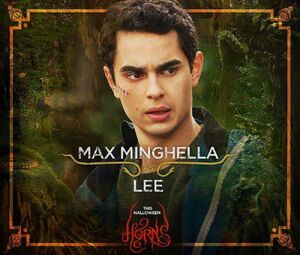 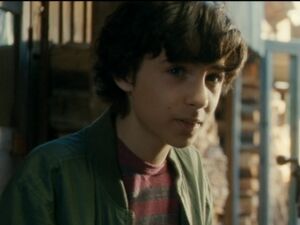 Lee as a teenager. 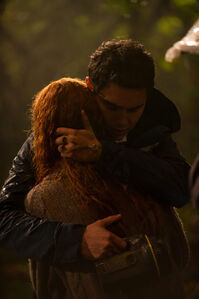 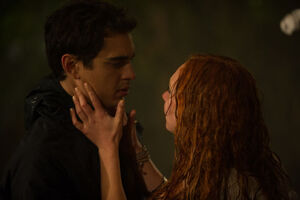 Lee with Merrin as he is about to rape and kill her. 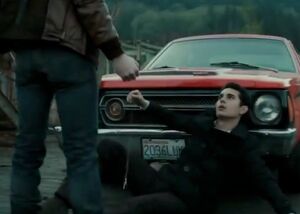 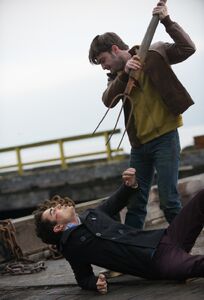 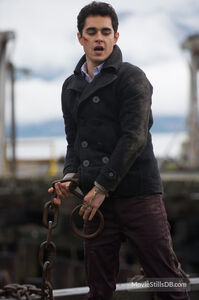 Lee whips Iggy with a chain.