Empowerment by absorbing nutrients from the plants

Kill Olimar and his Pikmin (failed).

The Leech Hydroe is the main antagonist and final boss of the 2017 3DS videogame Hey! Pikmin, a spinoff of the Pikmin series.

The Leech Hydroe is a green amoeba-like animal that normally feeds on nutrients released from plants by absorbing them. While generally harmless and timid in its natural body, when absorbed to a large amount of Sparklium, its appearance turns bright pink, while its plant host turns into a massive three-headed monster with Venus flytrap-like heads followed down prickly necks onto a pink body covered with grass, with appendages made out of roots.

When Captain Olimar flies his spaceship, the S.S. Dolphin II, back towards his home planet of Hocotate, he accidentally warp drives to the wrong coordinates in space, crashing his ship into an asteroid belt orbiting a planet. In the process, his Sparklium Converter unit is detached from the ship and crash lands onto the Leech Hydroe as it slept. The energy released from the Sparklium sent the Leech Hydroe into a frenzy, causing its parasitic urges to grow rapidly out of control.

Upon reaching his 30,000 Sparklium limit, Olimar reaches the ninth and last sector in the planet, "The Final Stretch", to locate the Sparklium Converter, where he discovers the Leech Hydroe has gone berserk from all of the energy that it has consumed and engages it with his Pikmin army to defeat it once and for all. Ultimately, the Leech Hydroe uproots itself and grows wings to gain an advantage, but Olimar and the Pikmin manage to defeat it, seemingly killing it as it turns brown and decomposes.

With its host destroyed, the Leech Hydroe emerges from the remains and attacks Olimar, but trips and falls; in the process the Sparklium Converter pops out of its body, returning it back to its original form. Upon getting back up, the Leech Hydroe cowardly runs off, leaving its fate ambiguous.

In the first phase, it spits out three poison balls from its side heads; the right head first, then left. Then the middle head will open its mouth, casting a shadow which shows where it will drop and crush any Pikmin underneath. The shadow follows the player, so they must try to avoid the shadow when it stops moving and attack the head when it gets stuck in the ground. After taking damage, both side heads will shoot two poison balls simultaneously before the cycle restarts.

In the second phase, it now has legs. It will try to stomp on the player and their Pikmin, crushing them, but cannot if the player quickly throws Pikmin at the bottom of the foot that flashes before it stomps. Then, it will use both of its feet to crush the player, and the player needs to quickly throw Pikmin again, enough causing it to trip and fall. The middle head falls down into view, allowing the player to throw the Pikmin at its head until it gets back up. The left and right heads will now spit poison balls, but they are significantly harder to avoid. Repeat throwing Pikmin at the bottom of its foot, and throwing Pikmin at its head. This phase always takes two times to make it fall, even if dishing out the most amount of damage as possible.

It gains wings, and loses its left and right heads. Now it will spit three poison balls, closely next to each other. Before it begins with the first ball, run under, and throw Pikmin at its chest. The Pikmin will hit it, which makes the Berserk Leech Hydroe blow them off with its wings, and then bite as it did in the first phase, except its head will be at the top part of the screen, allowing the player to toss Pikmin at it. After taking damage, it will blow them off again. It then flies to the back of the screen and shoots a poisonous laser beam at Olimar, killing up to seven Pikmin at a time if the player does not avoid it in time. Once again, repeat throwing Pikmin at its chest and once it is low on HP it will snap three times. Throw Pikmin at its head until the health reaches zero to win the battle. 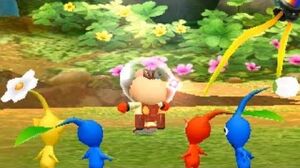 Hey! Pikmin - Finale Fragment of Hope (No Deaths)
Add a photo to this gallery

Retrieved from "https://villains.fandom.com/wiki/Leech_Hydroe?oldid=3767844"
Community content is available under CC-BY-SA unless otherwise noted.