Villains Wiki
Register
Don't have an account?
Sign In
Advertisement
in: Female, Aliens, Doctor Who Villains,
and 12 more

To turn Earth into a Rakweed farm

Leef Apple Glyn Slitheen-Blathereen is the wife of Tree and one of the main antagonists of The Sarah Jane Adventures episode The Gift. She along with her husband at first seem friendly claiming to be peaceful Blathereen but where in fact Slitheen-Blathereen a Raxacoricofallapatorian family who were created after members of the Slitheen Family intermingled with members of the Blathereen Family. She and Tree look down upon their Blathereen relatives seeing them as weak and instead take after their villainous Slitheen relatives.

Leef along with Tree arrived on Earth and captured two Slitheen members using the names of Chris and Dave who were about use a matter compressor to turn Earth into a diamond. They then introduced themselves as Blathereen and claimed to be bounty hunters to capture the Slitheen before later giving Sarah Jane Smith a plant called Rakweed which they said could survive in the harshest conditions and could save millions of lives as a thank you present for stopping the Slitheen many times.

However this was later revealed to be part of Leef and Tree's plan to turn Earth into a Rakweed farm and they were addicted to the plant. However the plant had one weakness: Bell Ringing which came in handy for Sarah Jane and the gang to defeat Leef and Tree as they had just eaten Rakweed. So Sarah Jane's computer Mr. Smith makes a ringing noise which effects the Rakweed that the two Slitheen-Blathereen had just eaten and creates methane gas inside them causing the two to explode leaving the gang covered in their slimy remains.

She is voiced by Miriam Margolyes, who played Aunt Sponge.

Leef has orangey-brown skin, black eyes and long claws. Like the Slitheen, Leef wears a collar with a pink square at the front of it (though she is never seen in a human disguise) and also wears a bracelet which she used to teleport the two Slitheen away and it could also fire lasers and hack into computer systems. 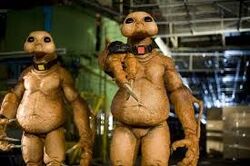 Leef and her husband Tree. 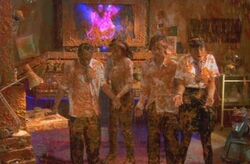