Ruler of the Tower of Disorder

Likes both wealth and power.

Leezar, also called Lord Leezar by his minions, is a nasty, trash-talking, power-hungry warlock and the main antagonist of the 2011 fantasy/comedy film Your Highness.

He was portrayed by Justin Theroux, who also played Seamus O'Grady in Charlie's Angels: Full Throttle, Lord Garmadon in The LEGO Ninjago Movie, Tom Watson in The Girl On the Train, and Dropkick in Bumblebee.

Leezar, who is the most vile and nastiest wizard that ever lived, has been the enemy of the Kingdom of Mor led by King Tallious for years as he plaguing the land with his monsters and evil magic. He seeks to conquer it and the whole world through a secret ancient prophecy of a warlock consummating with a virgin at the celestial alignment of the two moons to create a powerful dragon to control. Standing in his way is Mor's royal Prince and sole champion, Fabious.

While celebrating his latest victory over the evil sorcerer who has been ravaging Tallious's kingdom, Leezar, Fabious introduces the virgin Belladonna he freed from his towering castle known as the Tower of Disorder and wishes to marry her. Though he is made the best man, his brother Thadeous skips the wedding after overhearing Fabious' Elite Knights, led by Boremont, talk about him negatively. But the wedding is then crashed by Leezar, revealing himself to be the one who placed Belladona in the tower before spiriting her away. Returning to the castle with his servant Courtney, Thadeous is forced into joining Fabious on his quest to rescue Belladonna.

Visiting the Great Wise Wizard, Thadeous and Fabious learn that Leezar is attempting to fulfill a prophecy of a warlock having sex with a maiden when the two moons converge, impregnating her with a dragon that will allow him to take over King Tallious' kingdom. Leezar, aided by his three witches called Mothers, lays siege upon the citizens and successfully captures Belladonna. To destroy Leezar, the brothers are given a magic compass that would lead them to the Sword of Unicorn, located within a labyrinth. On the way there, they learn Fabious's slave, Julie has been reporting to Leezar of their progress, and the Elite Knights are serving the warlock. After his brother sends his mechanical bird Simon to tell the king of the Elite Knights' betrayal and request reinforcements, Thadeous, Fabious and Courtney are captured by nymphs that are part of a savage tribe ruled by their leader, Marteetee, who imprisons them at an arena where Fabious kills off Marteetee's finest warrior. In retaliation, Marteetee summons his hydra-like familiar to kill them.

Thadeous and Fabious are rescued by Isabel, a warrior seeking revenge for her father's murder at Marteetee's hands. Later that night, Thadeous learns that Isabel is also after Leezar for the slaughter of her brothers. The next day, the party learn too late that Isabel stole the compass from Thadeous. Fabious decides to find the Sword of Unicorn alone as Thadeous and Courtney go to a tavern, where they find Isabel and steal the compass back. But finding that his brother has been captured by Leezar's men, Thadeous wins Isabel over as they join forces, entering the labyrinth where they encounter a minotaur. Getting separated from the others, Thadeous retrieves the Blade of Unicorn and slays the minotaur. Thadeous and his group make their way to Leezar's Tower of Disorder and free Fabious while giving him the Sword of Unicorn. As the others kill off Julie and Boremont's men along with Leezar's mothers, Fabious uses the Blade of Unicorn to end Leezar's life before he rapes Belladonna, saving the kingdom.

After their victory, Isabel goes on another quest, and the heroes return home. Fabious and Belladonna marry. Thadeous is approached by Isabel, who reveals that she has fallen in love with him. However, for them to have sex, he must first slay the witch that cast a spell on her, locking her in a chastity belt. Though he is not in the mood to go out, Isabel's suggestion convinces him to go on a new adventure. 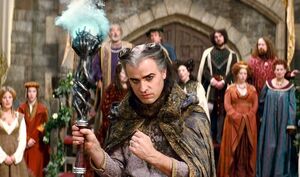