Monster
Terror of the East

Champion of the Hidebarks (formerly)

Skilled use of a blade
Incredible durability
Brute strength

Take revenge on the Hidebarks for joining the Legion (partially succeeded).

Conquer the Mojave.
Take over Hoover Dam.
Destroy the NCR.

Legate Lanius is the military leader of Caesar's Legion and is either a supporting character or the final antagonist of the main story of Fallout: New Vegas depending on which faction the Courier sides with.

He was voiced by Mitch Lewis.

Legate resides at the Legates camp, located just beyond Hoover Dam, where the final battle takes place, and cannot be reached until the end of the game. Lanius is the Legion's most savage and bloodthirsty warrior of all, and even Caesar himself says that he's only in it for the killing. If Caesar dies, Lanius becomes the new "Caesar" and the Legion becomes far more brutal under his leadership. If the Courier decides to side with the Legion, Legate Lanius will be the one who gives the player the order to attack Hoover Dam, and also the one who congratulates the player after the Legion has won the battle.

He is by far the Legion's most physically powerful member, being a massively tall and muscular man sporting an intimidating golden suit of armor with a mask in the image of the Roman God of War Mars and wielding an enormous sword known as the "Blade of the East". He is an outright boss character, with more HP than any other character in the game and several unique NPC perks that give him special abilities.

Asking Caesar about him reveals that Lanius was a member of a tribe hostile to Caesar's Legion, the Hidebarks, and Lanius was the bloodthirsty champion of that tribe, sometimes ambushing entire groups of legionaries by himself. When Caesar's Legion finally tracked down the Hidebarks, they knew that they wouldn't be able to win against Caesar, so they chose to surrender. This act drove Lanius into a bloodthirsty frenzy; killing the Chieftain and 15 others of his own tribe single-handedly before he was knocked unconscious. When Lanius woke up most of his face was torn off and Caesar was standing beside him. He offered Lanius a place in the Legion and a mask forged in the image of the great god Mars especially for him. Lanius accepted Caesar's proposal, but in return he wanted permission to kill the survivors of his old tribe (However, Caesar demanded that he only kill the adult males). Since this time, Lanius has led the Caesar's Legion to victory over 19 tribes and has led the conquest of Colorado.

When spoken to, Lanius is revealed to respect honor above everything. He states that treachery should not be relied on as a tactic.

In one of Mr. New Vegas' radio broadcasts, It is stated that Legate Lanius practises a version of punishment from the Roman Army called decimation, killing every tenth man if they were to lose a battle.

Lanius became a renowned figure in Caesar's Legion sometime after the First Battle of Hoover Dam, since a dialogue with Joshua Graham shows he doesn't know Lanius but he has heard of him after his execution. He is also the only member of the Legion to call Joshua Graham by his true name (everyone else in the Legion calls him The Burned Man, as Caesar has forbidden them to refer to him by name, under penalty of death).

If the player sides with the Legion and allows Caesar to die of his brain tumor, Lanius will become the new leader of the Legion. He is far more ruthless than Caesar, and handles several things differently than Caesar would if victorious. For example, he would have Arcade Gannon crucified rather than keeping him on-hand as a doctor, slaughter the people of the Strip upon arrival at the gates of Vegas, have Chief Hanlon crucified with the other NCR Rangers rather than granting him a swift death out of respect, exterminate the Followers of the Apocalypse rather than giving them safe passage out of the Mojave Wasteland, and pursue the Enclave remnants rather than recognizing it as a lost cause.

It is possible to make Legate Lanius surrender without killing him with a perfect Speech skill of 100%, by convincing him that the NCR have set a trap for him and the fight is already lost, or that the vast NCR territory of the Mojave Wasteland would be too much for the Legion to maintain in its current state. 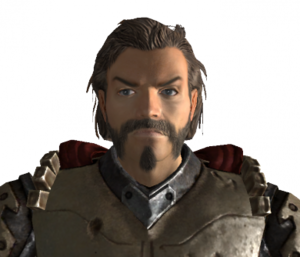 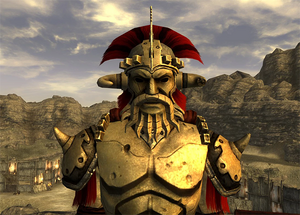 Lanius, prepared to fight the Courier.

Lanius inside his war tent. 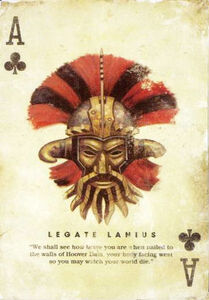 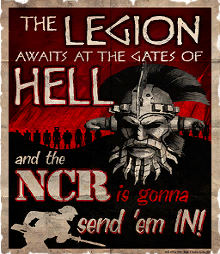 Lanius on an NCR propaganda poster. 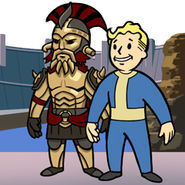 Lanius on the Achievement/Trophy for completing "Veni, Vidi, Vici".