Kill anyone they see (partially succeeded).

The Legion are one of the first groups of antagonists in the 2007 video game Manhunt 2. They are a sub-group of the Dixmor Inmates.

The Legion, along with the Dixmor Inmates and the Asylum Orderlies, are the first group of enemies Daniel Lamb/Leo Kasper face against.

The Legion are the failed experiments of The Project conducted by Dr. Pickman. They differ from regular inmates with their headgear and mutilated faces.

The first Legion you encounter in the game is one you learn how to sneak past. If you fail to do so, the Legion will urinate on Danny's leg and warns him that he'll do it again on Daniel's corpse, if he were somehow able to get out and kill him.

Daniel must fight one when he stumbles out of a door in front of him. Leo insists to Daniel that if he doesn't, that the Legion member would certainly kill him. In order to protect himself, Daniel kills the man, though under self defense.

The next Legion, the religious fanatic, is encountered in front of a gate where Daniel needs to close all of the cell doors before he can continue. Daniel can either kill the Legion or close the door to spare him since he isn't facing Daniel and poses no immediate threat.

The final Legion appears near the end of the level in a cell with a seemingly catatonic inmate, jumping in place and shouting nonsense while an orderly taunts him. Daniel can kill the orderly, but unless the player spawns a gun with a trainer, the legion can't be harmed.

After the first mission, they are only ever seen again in the optional mission "Release Therapy", where Leo Kasper fights through them to eventually get to and kill Daniel. 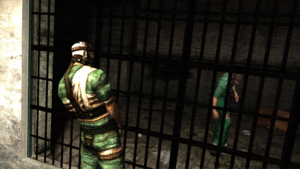 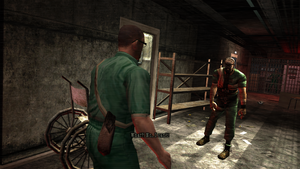 The Legion member that Daniel learns how to fight against. 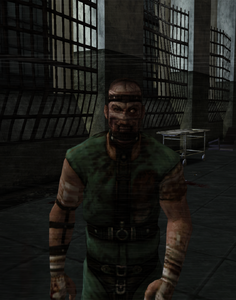 The final Legion, jumping and screaming behind his cell. 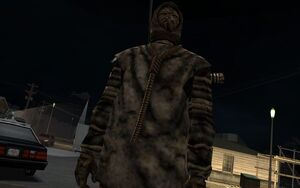 Beta version of the Legion.