Many from the Machine

The Legion ex Machina are a recurring villainous faction in the animated series Big Guy & Rusty the Boy Robot. The group consisted of 7 members (most of whom were identical). Despite having the same bodies, each member had a different cybernetic modification.

The Legion ex Machina was invented by Dr. Roland Poindexter. His goal was to create what he perceived as the perfect artificially intelligent robots. Poindexter was successful, but that was also his downfall, and his creations soon turned against him. The Legion placed Poindexter in stasis where they had complete access to his mind. The Legion then built a secret base and began their goal to eradicate mankind.

ARGO-12 was the first robot that was created by the Legion. Its purpose was to recruit any other robots to join the Legion. It terminated any of them if they refused the offer. It was powered by packs of nuclear energy that Number 6 stole from where he worked. ARGO-12 engaged in a fight with the Big Guy and was almost successful. It ran low on fuel and was given a defective nuclear pack from Rusty, which then resulted in a massive overload. ARGO-12 was then scrapped afterward.

Number 6 (also known as Dr. Gilder) was placed inside Quark Industries as a mole in order to gather information. He harbored bitter feelings toward the CEO, Quark Donovan, for destroying his inventions. Gilder eventually lost his patience and shifted his focus towards killing Donovan. His first attempt was to hack a robot but it was stopped by the Big Guy. He then hacked into Rusty and controlled the boy as an assassin. Dr. Gilder was then stopped when one of Quark's scientists, Dr. Erika Slate, discovered what he was doing. Dr. Gilder chased her to a grinder, lost his skin in the process, and revealed that he was a robot. Dr.Gilder then fell into the grinder after Big Guy shot him. The Legion took no pity in the demise of Number 6.

ARGO-12000 was the Legion's second robot creation. It was a 400 ft version of ARGO-12. ARGO-12000 was sent to steal a Micro-Fusion generator that could be used to build more robots like it. The body parts of ARGO-12000 were transported through an underground rail station. The remaining piece, the left hand, was salvaged before construction was complete, but that didn't stop the robot from stealing the micro-fusion generator which was successful. It was extraordinarily resistant to attack, shrugging off large bomb explosions. ARGO-12000 headed towards the nearest ocean, the only place where it could hide, but the military managed to arm the weapons in the robot's missing hand, which they then successfully fired on it, dealing a mortal blow. It collapsed and went permanently offline. The generator was then recovered.

The Legion built a machine to steal Rusty's mind. It damaged a dam to draw attention. While it was attacked by the Big Guy, a mechanical orb was released from the backside. The sphere attached to Rusty's head and absorbed his brain waves, which then caused his entire body to go offline. The Legion used the acquired data to access his Rusty's thoughts. Rusty managed to escape their computer network and entered the Internet. Number 4 then chased Rusty throughout the Internet. The pursuit ended at Quark's Digital Archives. Big Guy appeared and intervened: he shot Number 4 into a stream of data. The Legion then spent time and repaired Number 4.

In order to finish their latest creation, the Legion needed specialized fuel. Their only source was a power plant that manufactured neutrinos. They sent a machine to steal a new kind of neutrinos: anti-tronic neutrinos. As it began to drain the entire supply, it was interrupted by the Big Guy. Rusty then attempted to download data from the machine's archives. Number 4 attempted to use his own strength to counteract Rusty. Both sides then engaged in a mental tug-of-war. The connection ended after Rusty and Number 4 were overwhelmed. Later, it was revealed that their personalities were swapped. Rusty started to build Project NOVA and released it. Rusty went after NOVA and so did Number 4. When they reached the scene, Rusty and Number 4 engaged in another mental tug-of-war. That time, there was a swap between their identities. Rusty took full control of Number 4's body. He then short-circuited NOVA and deactivated his original body. The brain of Number 4 was then acquired by Quark.

Sometime later, the Legion sent Number 5 to acquire a robot from the Chopshoppers. Number 5 was greeted by the Big Guy upon his arrival. A fight took place where Number 5 had his cybernetic modification as an advantage. His skin was destroyed after he revealed himself as a robot, but he still had the upper hand in the battle. Big Guy used his own body to smash Number 5 into the ground. Number 5 malfunctioned from the impact and was then shot into a tank of cryogenic ice. His existence came to an end when Rusty shattered his frozen body.

Quark still had the brain of Number 4, and Donovan's nephew, Pierre, stole it for his science project. He then placed the brain inside a toy robot. Once activated, the toy robot escaped. Unaware of the Legion, Pierre had no idea about the possible consequences. Meanwhile, the Legion made plans to eliminate Number 4 because he became incompetent. As revenge for their betrayal, Number 4 attempted to destroy the entire city. He failed when his auto-safety mechanism was activated by the Big Guy and destroyed his head.

The remaining three members of the Legion acquired a household version of Rusty from Quark industries. Using their advanced technology, they redesigned the circuitry. Then they connected the robot into a machine and used it to control every other household version. Their first part of their mission was to replace their own batteries with nuclear packs. The next phase was to shoot green beams at New Tronic City, that would annihilate the inhabitants and allow the Legion the opportunity to build a utopia for robots. They were almost successful, but a bomb destroyed all of the Rusties.

Frustrated by their constant defeats, the Legion built an exact duplicate of the Big Guy. They dubbed it the BGY-11X. The Legion trapped the real Big Guy in a remote desert. During the BGY-11X's time at Quark Industries, the Legion learned the truth: the Big Guy was piloted by a human: Lt. Dwayne Hunter. Despite the efforts of the BGY-11X to act like its counterpart, Rusty became suspicious and found out. The real Big Guy returned after his body and pilot were found. Both the original and the clone then engaged in a brutal fight. The Big Guy won by shooting his arm into the cannon of his opponent.

The victory was short lived, however. The Legion then dispatched a clone of the pilot, Lt. Dwayne Hunter. It shot Hunter and sent him directly to the Legion's Headquarters.

Upon Hunter's arrival, the Legion introduced themselves. The Legion revealed their creator who was also their prisoner. Poindexter's mind was a source of data. According the Legion, they felt no human emotions and therefore overthrew their creator. Their lack of human emotions led the Legion to believe that mankind was inferior. They felt that Hunter was less inferior, but was more problematic. Then Hunter was placed into stasis.

The Legion's Headquarters were soon discovered when Quark found some old schematics. Rusty then promptly flew to the location, saved Hunter, and his presence alerted the Legion. The Legion then engaged in a climatic battle with their enemies. Number 1 equipped himself with blasters; Number 2 utilized his exoskeleton; and Number 3 took control of a giant robot. Poindexter was freed from his prison when the battle started. Poindexter and Rusty were intervened by Number 2. Number 2 then tried to kill Poindexter, but was pulled into a nearby fan which shredded his entire body. Meanwhile, Big Guy and Number 3 were in a fierce fight and were evenly matched. However, Big Guy found a way to defeat his opponent: he pushed Number 3 into a pool of blue acid that melted him. Afterward, Poindexter took cover while Big Guy and Rusty fought Number 1. Number 1 trapped Big Guy and Rusty in a force field and Big Guy lost his left arm in the process. Poindexter then used it to hit a machine which catapulted Number 1 directly into the force field. After Number 1's destruction, the field deactivated. A video message then suddenly appeared and the complex started to self destruct. Big Guy. Rusty, and Poindexter then escaped. During a later conversation, the members of Quark Industries attempt to reassure Poindexter by saying that they had destroyed all six members of the Legion, but Poindexter was struck with a sudden fear as he told them that he had created seven members.

The first member who was created and was the last one destroyed. As the leader, Number 1 was in charge of production and tactics. The other members fully respected him. Despite the loyalty, Number 1 took no pity in the death of his own colleagues. Occasionally, he displayed an ironic sense of humor.

Number 2's exoskeleton was entirely different from his colleagues. He was first who was destroyed in the Legion's downfall.

Number 3 was emotionless and spoke in a flat tone of voice. His eyes were never revealed. He and Number 2 usually agreed about the same matter. Despite his personality, Number 3 was capable of expressing anger. Number 3 was destroyed before Number 1 in the Legion's downfall.

Number 4 was the only one who swapped personalities with someone else. He was captured by Big Guy and Rusty.

Number 6 was also known as Dr. Gilder. He was only one with human emotions. Also, he was the only one without cybernetic parts. Number 6's outer appearance was different from his colleagues. He built robots for Quark Industries, but was actually a mole. He was the Legion's first member who was destroyed.

The status and location of Number 7 is unknown. 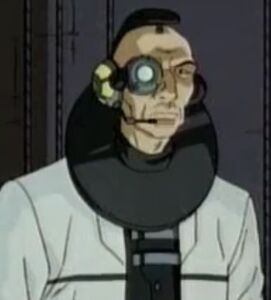 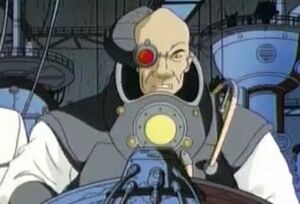 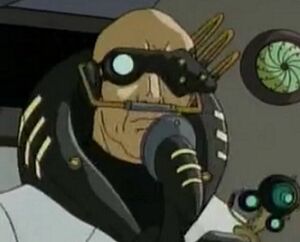 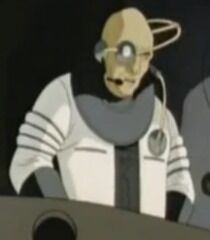 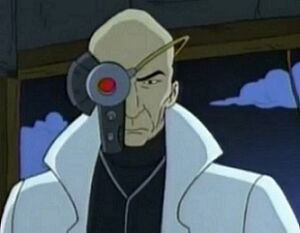 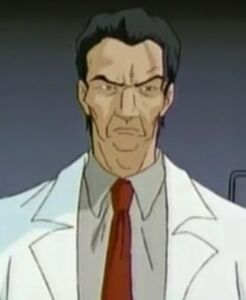 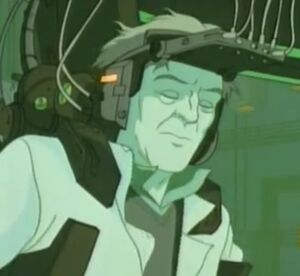 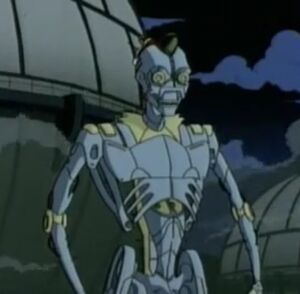 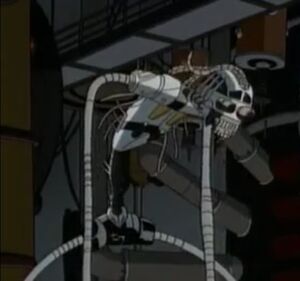 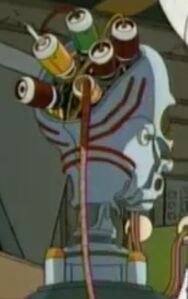 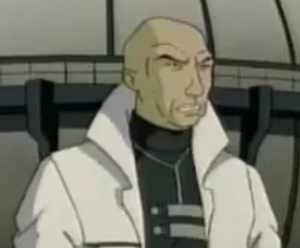 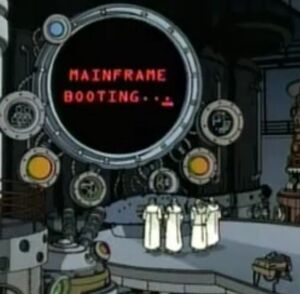 The Legion at their headquarters.