Villains Wiki
Register
Don't have an account?
Sign In
Advertisement
in: Articles under construction, Arrowverse Villains, DC Villains,
and 55 more

NOTE: This article is about the incarnation of the Legion of Doom from the Arrowverse. The mainstream version can be found here: Legion of Doom.

Tactics
High intelligence
Combatants
Intimidation
Each member has their own talent

Use the Medallion to locate the pieces of the Spear (succeeded)
Use the Spear of Destiny to rewrite reality in their favour (succeeded in an alternate timeline)
Kill the Legends (failed).

The Legion of Doom was the main antagonistic faction in Season 2 of the TV superhero series, DC's Legends of Tomorrow. They were a team of time-travelling supervillains that sought to find the legendary Spear of Destiny and use it to rewrite reality, specifically their own destinies.

After the creation of the Flashpoint timeline, Eobard Thawne was removed by the Flash in attempt to fix it. Upon doing so, Thawne was then relentlessly chased by Black Flash, a zombified servant of the Speed Force that was sent to kill and correct the aberration. Fearing for his life, Thawne planned to fix his current predicament by finding and retrieving the Spear of Destiny, a mystical object that could rewrite reality without the usage of time-travel. However, knowing that he couldn't do it alone, Thawne opted to recruit allies and promise them a chance to change their own realities.

Searching for the first piece of the Longinus Medallion, Thawne travelled to 1942 and hired Damien Darhk to assist Nazi Germany in nuking New York City to create a time aberration. However, this plan was thwarted by the Legends. He then later made a deal with high-ranking Nazi leader Baron Krieger and made a trade for the medallion piece in exchange for super soldier serum. Although the Legends and the J.S.A. (Justice Society of America) defeated Krieger and reached before he could, Thawne killed J.S.A. leader Rex Tyler and stole it.

Needing the other piece, Thawne approached Darhk in 1987 and the two then plotted to obtain the artifact from the Soviet Union and blow up the White House. Once again, the two were thwarted by the Legends. After Darhk learned of downfall and death in 2016 from Legends captain Sara Lance, he wanted to join Thawne on his mission to change reality, in which he agreed. After this, the two travelled to 2016 (after Darhk's death) and recruited a surprised Malcolm Merlyn, who had only just witnessed Oliver Queen killing Darhk. He agreed to join them after learning that he could change his past, thus forming the Legion of Doom.

Still requiring the other piece of the medallion, the Legion traveled to 1927 to create a large time aberration involving infamous crime lord Al Capone to bait the Legends. They offered assistance to Capone in order to maintain his criminal empire, in which he agreed intriguingly. They warned him of Prohibition agent Eliot Ness, who was hunting down Capone and aiming to bring him down. As the Legends arrived to correct the aberration, Thawne and Darhk ambushed them in one of Capone's clubs, kidnapping Sara and Martin Stein. After the two refused to cooperate, Thawne used a device to take Stein's appearance to infiltrate the Waverider after the Legends mount a rescue. As Thawne attacked the Legends, Merlyn led Capone's men onto the ship to kill them as he searches for the piece. After losing a fight to Sara, he offers Stein back in exchange for the piece. She agrees and gives them the medallion.

After assembling the medallion, Thawne reveals his plans to the others and that the only way to find the Spear of Destiny, which was broken into four pieces, was to find former Time Master and Legends captain Rip Hunter, who was in Hollywood, 1967. Thawne sent the two to capture him. However, they were confronted by the Legends, who got to Rip before they did. Later, upon learning that George Lucas had one of the pieces of the Spear, the two confronted him while also faced against Amaya Jiwe and a powerless Ray Palmer and Nate Heywood. After learning thar George threw it away, they brought the four to the junkyard and forced them to look through a trash compactor. As the other Legends arrived and beat them before getting the Spear piece and the Medallion, Thawne arrived and overpowered them. After Rip arrives and orders Gideon to open fire, Thawne captured Rip before he could escape with the Legends.

With Rip captured and brought to the Vanishing Point, Merlyn and Darhk tortured him for the locations of the other Spear fragments but to no avail. After Merlyn tries hypnotizing Rip, he learns that his memories of the Spear were gone as if his old self never even existed. Darhk then tortures Rip and pulls out his tooth, finding a bar code to deposit box in Switzerland. After Thawne's watch goes off, he sends them to get the contents. During this, Darhk and Merlyn start going at each other's throats to see who was least useful, while feeling that Thawne was not treating them as equals to him. Although Darhk suggested barging into the bank with force, Merlyn convinces him that they use Rip to get the box with subtlety.

Succeeding in Their Plans 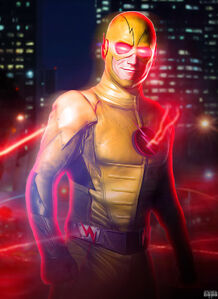 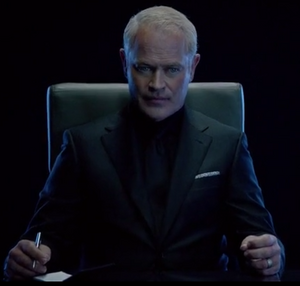 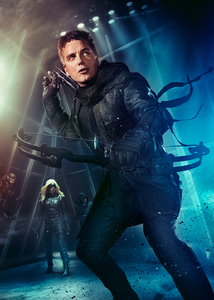 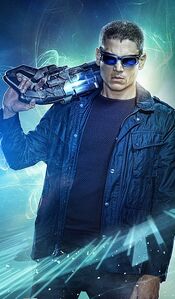 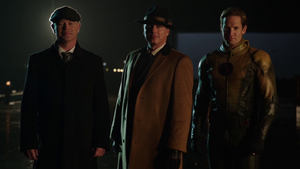 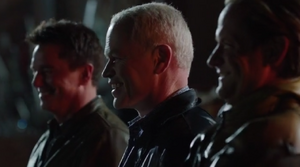 The Legion amused by Rip's failure to shoot them. 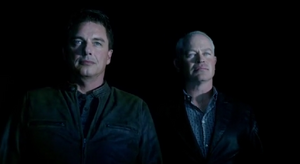 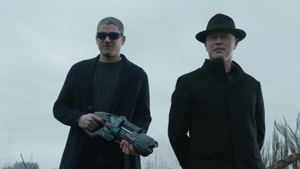 Snart and Darhk demanding the Spear from the Legends.