Vice-Minister of the Theocracy of Begnion

"Games of wit and words".

Become the most powerful man in Begnion.

Vice Minister Lekain, also known by his noble title Duke Gaddos is a major character in the Tellius continuity of the Fire Emblem series of video games. In the first game, Path of Radiance, he is a minor character, and later serves as the secondary antagonist in Radiant Dawn.

Lekain is Vice-Minister of the powerful Empire of Begnion, the largest nation on the continent of Tellius, and as such is theoretically the third most powerful man in the country. The exact duties of the Vice-Minister are unknown, but it is known that Lekain oversees the country's Senate and that he is a landed noble who rules the Duchy of Gaddos. He was promised in marriage to a more minor noblewoman, Lady Astrid of Damiel, who is more than thirty years his junior and enlisted in the Knighthood just to get away from him, and is often accompanied by another Duke, the weak-willed Hetzel, who functions as Lekain's general yes-man.

Lekain's first known villainous deed was to orchestrate the assassination by poisoning of Empress Misaha, the country's very popular ruler, after she emancipated the the country's Laguz slaves (causing Lekain and other corrupt nobles to lose fortunes in money) and planned to reveal the fact that the royal lineage of Begnion carried Laguz blood, the Laguz being a species of shapeshifters generally stronger but less intelligent than ordinary humans (or Beorc) and who were traditionally oppressed by them. Lekain also saw to the attempted murder of Misaha's granddaughter and heir, the Crown Princess Micaiah, but she in fact escaped.

Taking advantage of the country's chaos following the death of its liege, Lekain blamed the crime he had committed on the Kingdom of Serenes, home to the totally pacifistic Heron Laguz, and led his countrymen in a genocide that, due to the Herons' inability to resist, reduced their population to four in a single night. Begnion thereafter annexed what was left of Serenes. Lekain, along with Hetzel and the equally-corrupt Senators Valtome, Numida, and Seliora, voted to install Misaha's younger granddaughter Sanaki as Empress and the Senate's youngest, handsomest, and least experienced Senator, Sephiran, as Prime Minister, with the more experienced Lekain secretly influencing both of them.

Lekain is a minor character in Fire Emblem: Path of Radiance, where he is seen only during the "game of wit and words" the hero Ike plays with Empress Sanaki, and he tells Ike off for speaking disrespectfull to the Empress.

In Fire Emblem: Radiant Dawn Lekain appears to be the main villain. He is first seen in Part 1, where he is shown issuing orders to Duke Numida and Commander Jarod to oppress the nation of Daein, which Begnion had annexed following the defeat of King Ashnard. Lekain keeps Begnion's actions in Daein a closely-guarded secret from Sanaki, but rebels under the command of none other than the long-lost Princess Micaiah, who had adopted Daein as her home, succeed in starting rumors that reach the Empress's ear. Lekain Volunteers to lead an inspection team to the Daein Garrison to investigate the abuses, but the Empress sends Sephiran instead; Lekain and Numida then decide to disavow any knowledge of the abuses and let Jarod take all the blame.

In Part 3, the assumed-dead Crown Prince of Serenes, Rafiel, who had been discovered alive during the Daein rebellion, brings testimony to Gallia, the nation of the Beast Laguz, that Lekain, and not Ashnard, was the man responsible for the massacre of his people. Gallia sends an envoy to Begnion to confirm these accusations, whom Lekain promptly murders; this action prompts Gallia to declare war. Lekain imprisons Empress Sanaki under the pretense of being ill and frames the Prime Minister for treason, putting him at the top of Begnion's hierarchy; in an initially-unrevealed way he also procures the services of the Raven Laguz and their treacherous King Naesala. Finally, he orders Daein into the war on Begnion's side by revealing that he had tricked the country's new king, Pelleas, during the peace deal into making a Blood Pact, a mystical document that binds one country in service to another. Defying the terms of the Blood Pact would result in the citizens of Daein beginning to spontaneously die, one on the first day, two on the second, and so forth. With his pawns in place Lekain sets the stage for a war that will result in the genocide of all Laguz and the claiming of the entire continent in Begnion's name.

After the Goddess Ashera's judgment, brought on by the war, turns the majority of Tellius's citizens to stone, Lekain and an army of "faithful," including the other corrupt Senators, are freed under the condition that they fight for her. Lekain's personality appears to change in the ensuing fourth part of the game; while before it had seemed that he only feigned supporting the Goddess, once she had been proven to exist he styled himself as her prophet. He found himself facing an army composed of the finest soldiers of Daein, Crimea, Gallia, Phoenicis, and Serenes, as well as Begnion loyalists led by Sanaki, who had been freed by a repentant Naesala. After two battalions of his "Disciples of Order" are defeated, Lekain dispatches Valtome and then Numida to lead the armies personally, and they too are killed in the fighting. Lekain then takes command personally, meeting the assembled army at the goddess's base, the Tower of Guidance, along with Hetzel, where he reveals his culpability in the murders of Misaha and the Serenes Herons.

In the end, for all his bluster, Lekain died, along with Hetzel, in that battle. Onhis body are found two Blood Pacts, one made with Pelleas, the other with Naesala's father, explaining Naesala's betrayal of the other Laguz. Completing Lekain's failure was the fact that he had not been the mastermind of the goddess's return at all - that role fell to General Zelgius and the man Lekain had long thought his pawn, Prime Minister Sephiran, who, being the legendary Heron Laguz Lehran, was far older and far smarter than Lekain could have ever counted on, and who had been driven to evil by witnessing the genocide Lekain himself had caused. 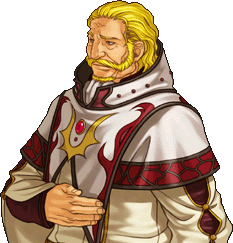 Retrieved from "https://villains.fandom.com/wiki/Lekain?oldid=4111333"
Community content is available under CC-BY-SA unless otherwise noted.