Leland Gaunt is the main antagonist of Stephen King's horror novel Needful Things, as well as the 1993 film of the same name. Mr. Gaunt is the proprietor of the store Needful Things, a this n' that shop that seemed to have an item perfectly suited for anyone who ever came in. It is later revealed that he is actually a powerful demon that tricks customers into giving him their souls. (In the film, he is Satan himself.)

In the film, he was portrayed by the late Max von Sydow, who also portrayed Ernst Stavro Blofeld in Never Say Never Again and voiced Vigo the Carpathian in Ghostbusters II.

When Leland Gaunt first appeared in Castle Rock, Maine, he seemed like a charming man in his 50's or 60's. His eyes changed color, depending on who saw them. His hands have no lines, and his index fingers are as long as his middle fingers. It has been hinted that, in Stephen King's literary multiverse, Gaunt might be an avatar of Nyarlathotep (unlike the film, in which he is The Devil in disguise.).

He opened a shop called Needful Things. After he was driven out of Castle Rock, he opened a shop, called Answered Prayers, in Junction City, Iowa.

Alan Pangborn remembers a shop in the hometown of his youth called Just The Ticket; whether Gaunt ran this shop or not is left unknown.

The shop "Needful Things" opens in the town of Castle Rock, Maine, sparking the curiosity of its citizens. The proprietor, Leland Gaunt, is a charming elderly gentleman who always seems to have an item in stock that is perfectly suited to any customer who comes through his door.

The prices are surprisingly low, considering the merchandise - such as a rare Sandy Koufax baseball card, a carnival glass lampshade, and a fragment of wood believed to be from Noah's Ark - but he expects each customer to also play a little prank on someone else in Castle Rock.

Gaunt knows about the long-standing private grudges, arguments, and feuds between the various townspeople, and the pranks are his means of forcing them to escalate until the whole town is eventually caught up in madness and violence.

Polly Chalmers buys an ancient charm that relieves the arthritis pain in her hands. Gaunt eventually hires the petty criminal John "Ace" Merrill as his assistant, providing him with high-quality cocaine and hinting at buried treasure that could relieve the debt he owes to a pair of drug dealers. Ace's first assignment is to retrieve crates of pistols, ammunition, and blasting caps from a garage in Boston; Gaunt soon begins to sell the pistols to his customers so they can protect their property.

He has traveled the world for centuries, selling useless junk that appears to be whatever the customers desire most.

They become so paranoid about keeping their items safe that they eagerly buy up the weapons that he inevitably offers and trade away their souls. Ace begins to suspect the supernatural background of his new employer, but Gaunt keeps him in line through intimidation and promises of revenge against Alan and the town.

Eventually, Needful Things causes so much violence in the town that a riot breaks out, resulting in much of the town being destroyed, including Needful Things itself. Before Gaunt can get away with the customers' souls however, Alan confronts his new nemesis and uses a bunch of magical goods from Needful Things to force Gaunt back and grabs his valise, which contains the souls of his customers. Nevertheless, Gaunt escapes and flees the scene (not before destroying most of the remaining main street), his car turning into a horse-drawn wagon as he becomes a hunchbacked dwarf. With the town completely destroyed and many deaths, the survivors are left to ponder an uncertain future.

The novel ends as it begins, with a first-person narrative indicating that a new and mysterious shop is about to open in a small Iowa town - an implication that Gaunt is ready to begin his business cycle all over again. 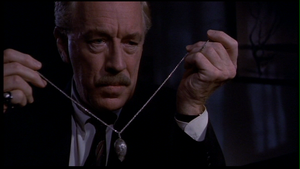 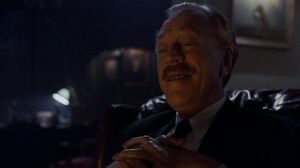 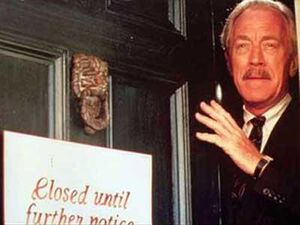 Gaunt at the door of his shop.
Add a photo to this gallery

Retrieved from "https://villains.fandom.com/wiki/Leland_Gaunt?oldid=4097939"
Community content is available under CC-BY-SA unless otherwise noted.