NOTE: This article is about the incarnation of Owl from the Marvel Cinematic film series. The mainstream version can be found here: Owl.

Go through with Fisk's operation.

Remove Fisk's girlfriend Vanessa.
Escape with half of Fisk's fortune. (all failed)

Leland Owlsley is a major antagonist in Season 1 of the 2015 Marvel TV series Daredevil.

He was a member of Wilson Fisk's criminal empire, serving as Fisk's money launderer and financier. When he comes to the conclusion that Fisk is losing his touch because of his love for Vanessa, Owlsley attempts to murder Vanessa by poisoning her. Vanessa survives the poison and Owlsley at first manages to avoid suspicion. However, Fisk finds out eventually and Leland attempts to blackmail his way to freedom, threatening to deliver a corrupt police detective who has information about Fisk's criminal empire, to the FBI. Owlsley demands half of Fisk's assets but Fisk refuses, instead attacking and murdering Owlsley.

He was portrayed by Bob Gunton, who also portrayed Samuel Norton in The Shawshank Redemption.

Together with Fisk's other business partners, Owlsley is invited to the top of an empty building. The other partners are the Russian brothers Anatoly and Vladimir Ranshakov, Chinese triad leader Madame Gao and Nobu, the leader of The Hand. While waiting, Owlsley grows irritated by Nobu, who does not speak English, and also starts complaining about the weather.

Eventually, Fisk's right-hand man Wesley turns up. The group start talking about their plans, with Owlsley blaming the Russians because they did not deliver according to plan. The Ranskahov's blame an attack of Daredevil, which Owlsley sees as an opportunity. A few days later, Owlsley meets with Wesley again, discussing the trial of minor henchman John Healy with him. Owlsley also shows annoyance that Fisk himself is not present at their meeting.

Owlsley, Nobu and Gao meet with Fisk and Wesley days later. Owlsley asks where the Ranskahov brothers are and is told that the Russians are no longer part of their criminal enterprise. Both Gao and Nobu are unhappy with the situation and claim that Fisk should have talked to them before. Owlsley raises the matter of the Russian's share of the money, questioning whether all of the money would fall to Fisk. Fisk promises to share the money equally with all of them.

Owlsley meets with Nobu, discussing business. Owlsley also hints that he is aware of what Nobu is bringing into the city, suggesting that the two work together to prevent what happened to the Russians happening to them. However, Nobu declines, claiming that everyone is on his own. Nobu then leaves the parking garage and Owlsley heads to his car where he is approached by the vigilante Daredevil. Daredevil grabs him and pins him against his car, interrogating Owlsley who claims that he only works for Silver & Brent, the cover company for his money laundering. Daredevil does not believe him and continues to ask for information on Fisk but Owlsley draws a taser and stuns Daredevil, escaping in his car while Daredevil is incapacitated.

As a precaution, Owlsley then visits Fisk's tailor who equips him with a Kevlar suit. Fisk, whose partners have been attacked by Daredevil, also advises Owlsley to head to a safe house.

After Owlsley is informed about the death of Nobu, he is shocked. Fisk later orders him to speak with Madame Gao to assure her that no further problems will arise. Owlsley agrees but, when visiting Gao, he instead plots with her against Fisk. Both agree that Fisk's girlfriend Vanessa distracts Fisk too much emotionally, causing Fisk to become careless and endangering their operation. To prevent Vanessa causing further harm, the two decide to kill her. On a fundraiser for Fisk, Owlsley poisons the champagne, killing several people. Vanessa also drinks the champagne and, to avoid suspicion, Leland grabs a poisoned glass as well. When the people, including Vanessa, fall to the ground Owlsley acts horrified and drops the glass he is holding, loudly exclaiming that he almost drunk the champagne as well.

Fisk, Owlsley and some of Fisk's men rush to the hospital where Vanessa is immediately taken in. Owlsley continues his facade, asking a nurse whether he needs to be checked out as well. While Fisk almost breaks down in grief, Owlsley talks to Wesley, commenting on Fisk's state and claiming that he cannot run the business like that. While Wesley suspects that Madame Gao is responsible for the poison, Leland tries to shift the blame on the Hand. Wesley, unaware that Leland was the poisoner, sends Owlsley to Madame Gao to investigate.

Days later, Owlsley is summoned to a warehouse by Fisk, who shows him the corpse of Wesley. The two discuss who could be responsible for Wesley's murder and Leland once more tries to blame the Hand. However, he doesn't have any evidence to found his claim.

Leland later meets with Gao, learning that she can also speak English. Gao reveals her concern about the actions of Daredevil and reveals to him that she will return to China. Gao also asks Owlsley whether he killed Wesley which Leland denies.

The next night, Fisk meets with Leland and talks to him about the financial issue of their project. The talk comes to Gao, who has fled the country and returned to China. Fisk then hands Leland a paper, telling him to take a look at it as there seems to be some irregularities on his accounts.

Leland reassures him, claiming that he is pushing Fisk's money around all the time to keep investigators off their backs. Fisk notices Leland sweating and his hand shaking and asks, what is going on. Leland realizes that Fisk knows that he is the traitor and, knowing better than denying it, admits it. Fisk then links Leland's betrayal to Wesley's death but Leland denies having anything to do with the murder. From Leland's reaction when asked about the poisoning, Fisk realizes that the poisoning at the gala was also Leland's and Gao's work and that the real target was Vanessa, not Fisk himself. Leland attempts to blackmail Fisk into letting him go, revealing that he has one of the corrupt policemen who took money from Fisk as a hostage and that the officer will be surrendered to the FBI should Leland not make it back. Leland also demands half of Fisk's money.

However, Fisk refuses and instead strikes Leland right across the face. Leland stumbles back and draws a taser from his pocket and although he is able to electrocute Fisk, the big man remains on his feet. Leland is forced to back into a corner, where an outraged Fisk throws him down an elevator shaft, killing him. 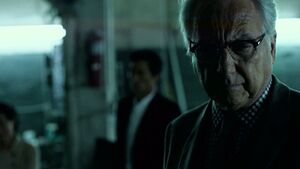 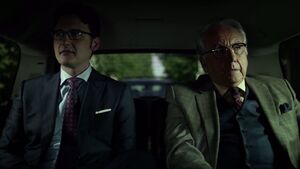 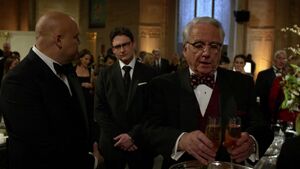 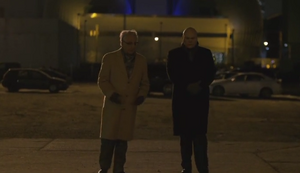 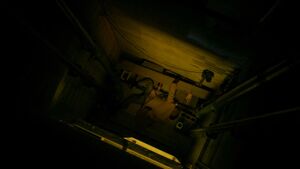