Leader of the Original Resistance Cell (as Zero)

Destroy the Holy Britannian Empire.
Discover the truth of his mother's murder.
Create a world where Nunnally can be happy (all succeeded).

Lelouch vi Britannia is the main protagonist of the anime series Code Geass. He is the son of the Britannian Emperor Charles zi Britannia and Marianne vi Britannia, and the brother of Nunnally vi Britannia. After being exiled to Japan by his parents to cover up their own plans for global conquest, and embracing Japan as his true home, Lelouch is traumatized after witnessing Britannia's conquest of the country and vows to destroy them. After gaining the power of Geass, the power to compel people, from the mysterious C.C, Lelouch becomes the vigilante Zero and leader of the Black Knights, the Japanese resistance, to overthrow Britannia and create a better world for his sister and friends.

Despite his intentions Lelouch faces many moral challenges that gradually turns him into a villainous character, manipulating his own army and committing mass murder of Britannians and Japanese alike, to achieve his goal. However Lelouch still values the lives of his closest loved ones, even his best friend Suzaku Kururugi who becomes an honorary Britannian and Lelouch's archenemy, and their happiness is his primary motivation for overthrowing Britannia.

Lelouch was a regular schoolboy who goes to a high school in Japan or as it is now known as Area 11. He had a special power known as Geass or as it is also known, "The power of the king." He was not born with it though and before he acquired it, he had to make a contract with a girl named C.C.(or as it's pronounced C2). The girl also went by another name, "The immortal witch." She was called this because Geass allows it's possessor to live forever. It is said that anyone with Geass must find someone to grant a wish for them, then making it possible for the person who started the contract to truly die. Lelouch discovered C.C. by accident when he got caught up in a terrorist act by the Japanese or "Elevens" as they're now called. Lelouch had stumbled onto the back of a truck being handled by two Eleven terrorists and found a large container which had the girl inside. But it was not known by either the Elevens or Lelouch that there was actually a girl in there just that it was a top-secret project being handled by the Britannian military. There are two parts to this show and at the beginning of both parts, Lelouch learns about Geass. The first part he acquires it, the second part he remembers he has it. In both of these first episodes, C.C. helps Lelouch out of a sticky situation.

The Elevens think that there is only poison gas in C.C.'s container and nothing else, but they didn't know that there was another passenger on their truck, Lelouch. Lelouch also has a little sister named Nunnally who became blind due to the loss of their mother. Nunnally gets a major role in the next part of the show as an ambassador for Britannia who only wishes for peace and nothing else. Lelouch finds the container which he also thinks contains poison gas but finds out for himself what's in there later on when he gets into a critical situation. It's when C.C. is shot in the head by a Britannian soldier that Lelouch gains the power of Geass, which differs from person to person. After making a deal with C.C., he gains the power to control anyone he desires using his Geass eye, which happens to be his left eye. He then immediately puts his new power to use by controlling the soldiers who shot C.C. and commanding them to die. They do so by making their deaths look like suicide but instead it is s really a murder. After that, he decides to lead an army of his own consisting of the Elevens which he calls The Black Knights. He leads them by disguising himself as a new terrorist leader called Zero.

However, it all comes to an end in the late season 2 when the Black Knights betrayed him as a result of his evil brother, Schneizel el Britannia, having told them everything about him, including his true identity and his Geass. Having lost everyone he holds dear including Nunnally, he tries to get himself killed by having the Black Knights shot him to death but failed when Rolo Lamperouge, his false brother saves his life. Lelouch tries to die with his father by imprisoning themselves in the Sword of Akasha but failed. In the next month, Lelouch becomes the new emperor of the Holy Britannian Empire with Suzaku as his lieutenant with the title Knight of Zero. Next, he orchestrated a war, and when discovering Nunnally is alive, he gets the Damocles and puts her imprisoned. He owns the world. In the next months, Lelouch gets into a fight with Zero, who turns out to be Suzaku. It is revealed that they plotted his assassination for world peace. Lelouch's real plan was to become enemy to the world so the world would unite against him. Suzaku stabs Lelouch, completing their plan. Nunnally touches his hand and realizes the plot. Lelouch says his final words, "I destroyed the world... and create it... anew" before finally dying. Lelouch dies smiling in the arms of a crying Nunnally, who then succeeds her brother as Empress of Britannia with Zero(Suzaku) as the new leader of the Black Knights. With his death, the world unites in an era of peace and cooperation, and Suzaku takes the role of Nunnally's guardian as Zero. 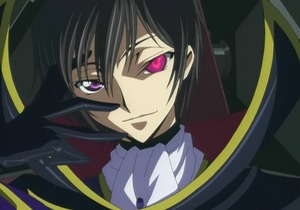 Lelouch with his Geass. 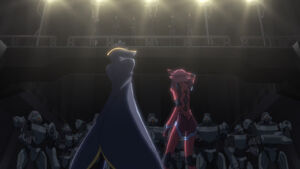 Lelouch gets betrayed by the Black Knights. 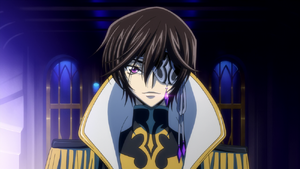 Retrieved from "https://villains.fandom.com/wiki/Lelouch_vi_Britannia?oldid=3711289"
Community content is available under CC-BY-SA unless otherwise noted.