Use the Astro Switches and Core Medals to become an all-powerful being.

Lem Kannagi is a member of Foundation X and the main antagonist of Kamen Rider × Kamen Rider Fourze & OOO: Movie War Mega Max. He transforms into Super Galaxy King to pursue his mad ambition of becoming ruler of the world.

He was portrayed by Toru Masuoka.

When meteors containing SOLU fell to Earth, Kannagi and his two aides went to retrieve them for Foundation X. Despite the efforts of Kamen Rider Stronger, Kannagi was able to take the SOLU, reporting his progress to his superior, Chancellor Kiima.

Kannagi later showed up to retrieve Poseidon's Core Medals after he was defeated.

Kannagi traveled with a convoy to transport the SOLU to Foundation X, only for them to be intercepted by Philip and Shotaro. While Shotaro transforms into Kamen Rider Joker to fight off the Kamakiri Yummy and Kabuto Yummy, Kannagi, Katal and Solaris arrive at the spacecraft Exodus, only to be confronted by the seven legendary Kamen Riders. Kannagi manages to fight them off, but thanks to Joker's interference the SOLU is leaked into a sewer.

Kannagi and Foundation X later go after a sample of SOLU that took on the identity of Nadeshiko Misaki and fell in love with Gentaro Kisaragi. Kannagi turns her into pure Cosmic Energy for the SOLU Swtich and mocks Gentaro by saying he has killed the girl he loved.

Kannagi then goes to Exodus and reveals his plans to become ruler of the world to Kiima before killing her and taking off. He is confronted by Kamen Riders Fourze and OOO, but transforms into the Super Galaxy King to face off against them. Kannagi at first overpowers them both with his ability to stop time, but OOO assumes his Super Tatoba Combo whiles Fourze shifts to his Rocket States to allow them to even the odds. As they are in space, the Super Galaxy King attempts to use the Cosmic Energy from the SOLU to destroy the Riders but Nadeshiko, now a sentient energy being, refuses to harm Gentaro and instead has Gentaro absorb the energy. With the power of Cosmic Energy OOO and Fourze defeat Super Galaxy King with their Super Tatoba Kick and using his Double Rocket Drill Kick. As Kannagi goes crazy from having been beaten by the Riders, he is knocked into the path of the Exodus by the dual Rider Kicks and destroyed.

Super Galaxy King was revived as part of the underground Badan Empire.

Through Shocker's rewriting of history with the History Modifying Machine, Super Galaxy King became among the many monsters that served the evil organization. He was later destroyed by Kamen Rider 3's Rocket Punch. 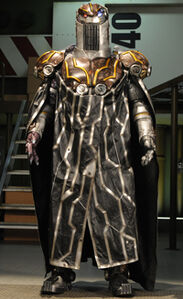 Super Galaxy King
Add a photo to this gallery

Retrieved from "https://villains.fandom.com/wiki/Lem_Kannagi?oldid=3832166"
Community content is available under CC-BY-SA unless otherwise noted.